On Her Way Back: New Orleans Continues to Rebuild After Hurricane Katrina 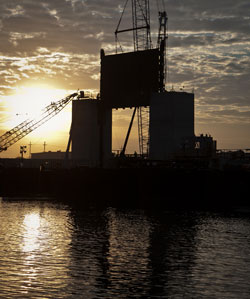 The U.S. Army Corps of Engineers installs a floodgate in the Industrial Canal in New Orleans. This structure will help reduce the risk of storm surge during a hurricane. Photo by ©Kathy Anderson 2012.

No one feels a stronger connection to a home city than the residents of New Orleans. They refused to let their city die after the pounding it took from Hurricane Katrina in 2005.

“It’s the soul of the city,” says David F. Bienvenu, a partner at Simon, Peragine, Smith & Redfearn who chairs the ABA Special Committee on Disaster Response and Preparedness. “So many people who live here have an inherent belief that this is the center of the universe.” In Katrina’s aftermath, “many of them would go to incredible lengths to stay here or come back.”

Robert Lynn Green Sr. typifies the spirit that helped save New Orleans. He was one of the first residents of his neighborhood in the Lower Ninth Ward to come back home after flooding pretty much wiped it out.

Green remembers what the neighborhood was like before Katrina. “There was no open land around here,” he says. “There was nothing but houses, nothing but families raising their children. A vacant lot was unusual to see.”

Now it’s easy to look across numerous vacant lots to see the concrete wall along a waterway where a barge punched a gaping hole, allowing floodwaters to sweep through the Lower Ninth.

“Our house floated away like a boat,” says Green. Even worse, his young granddaughter drowned in the floodwaters, and his mother died on the roof of a neighbor’s house while waiting to be rescued.

In the aftermath, Green relocated twice, to Baton Rouge and Nashville, Tenn. But he couldn’t stay away, and he explains why in terms any longtime New Orleans resident can appreciate. “Up in Nashville, I had red beans and they put onions on top,” he says incredulously. “That told me it just wasn’t home. The only way life could go on was to come back.”

All that remains of Green’s old house are a couple of concrete steps, but beyond them stands his new house built by actor Brad Pitt’s Make It Right Foundation. Similar Make It Right houses and other new construction have sprouted throughout the neighborhood, but 6½ years after Katrina, the Lower Ninth has a ways to go.

“The old residents who want to be here already have returned,” says Green. “We’re going to have to accept other people to bring the neighborhood all the way back.”

Other parts of New Orleans are in various states of recovery, and the population has dropped from 485,000 residents before Katrina to about 380,000, Bienvenu says. But the spirit of survival may be stronger than ever, he and others say.

Since Katrina, the beloved Saints football team has won a Super Bowl, the French Quarter is bustling with both locals and tourists, the streetcars are running along St. Charles Avenue and Canal Street, employment numbers are fairly steady, and Mardi Gras is as festive as ever.

As Mayor Mitchell J. Landrieu told the ABA House of Delegates during the association’s recent midyear meeting in the Crescent City, “The citizens of New Orleans have demonstrated one of the great American characteristics: resilience.”