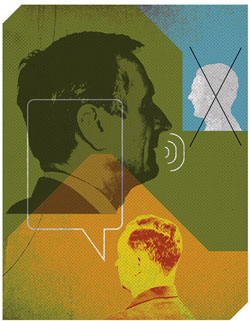 The ABA’s newest formal ethics opinion has endured an unusual existence almost since the day it became official.

Opinions issued by the ABA Standing Committee on Ethics and Professional Responsibility are important tools for guiding lawyers on the practical meaning of the Model Rules of Professional Conduct, which are the direct basis for lawyer conduct codes in every state except California.

Typically, the committee’s opinions are absorbed with minimal fanfare into the body of opinions and court rulings that help lawyers apply ethics rules in the context of their practices.

But Formal Opinion 11-461 (Advising Clients Regarding Direct Contacts with Represented Persons) has been a rare exception to that pattern. Comments questioning a key element of the opinion were posted on various discussion lists, including the one maintained by the Association of Professional Responsibility Lawyers. As a result, the ethics committee has taken a second look at the opinion.

The committee discussed the opinion, which was issued Aug. 4, at its meeting in October and again during its regular monthly conference call in November without reaching any conclusions about whether further action should be taken, according to Paula J. Frederick of Atlanta, who chairs the committee. In an interview with the ABA Journal in November, Frederick said the opinion would likely be on the agenda for the committee’s next teleconference in December, but she declined to predict whether the committee would make a final decision at that time. She said she asked an unofficial subcommittee of committee members and liaisons from other entities to make a recommendation for the committee to consider during that teleconference. The committee will hold its next regular meeting in early February during the ABA’s midyear meeting in New Orleans.

“We haven’t done anything except /magazine decide to decide whether to do anything,” said Frederick, who is general counsel to the State Bar of Georgia.

Meanwhile, Opinion 11-461 (PDF) remains official in the form in which it was issued in August, and it still is posted on the webpage of the Center for Professional Responsibility at the ABA’s website.

The key issue in the opinion is just how far a lawyer may go in advising or assisting a client who directly contacts an opposing party represented by counsel before the lawyer’s actions cross the line into impermissible overreaching.

“Even though parties to a matter are represented by counsel, they have the right to communicate directly with each other,” states the opinion. “In addition, a client may require the lawyer’s assistance and a lawyer may be reasonably expected to advise or assist the client regarding communications the client desires to have with a represented person.” In some cases, “the lawyer may take the initiative and advise the client that it may be desirable at a particular time for the client to communicate directly with the other party.”

The situations in which direct communications between the parties might prove fruitful include efforts to break an impasse in settlement negotiations, to confirm whether information has been received by the other party, to deliver documents for the other party to sign, and to work out issues in domestic relations cases.

At some point, the lawyer’s actions run up against restrictions set forth in the black letter and comments in Model Rules 4.2 and 8.4.

Under Model Rule 4.2, a lawyer representing a client “shall not communicate about the subject of the representation with a person the lawyer knows to be represented by another lawyer in the matter, unless the lawyer has the consent of the other lawyer or is authorized to do so by law or a court order.”

Comment 1 explains that the purpose of the “no contact rule” is to protect clients against “overreaching” by other lawyers in the case, interference with the client-lawyer relationship and disclosure of information to the detriment of the client’s case.

Nevertheless, while a lawyer may not use a client to engage in otherwise prohibited commu­nications with another party, Com­ment 4 to Rule 4.2 affirms that “parties to a matter may commu­nicate directly with each other, and a lawyer is not prohibited from advising a client concerning a communication that the client is legally entitled to make.”

So where is the line? “This committee believes that, without violating Rules 4.2 or 8.4(a), a lawyer may give substantial assistance to a client regarding a substantive communication with a represented adversary,” the opinion states. “That advice could include, for example, the subjects or topics to be addressed, issues to be raised and strategies to be used. Such advice may be given regardless of who—the lawyer or the client—conceives of the idea of having the communication.”

But the opinion cautions: “The line between permissible advice and impermissible assistance may not always be clear.” In the committee’s view, “the line must be drawn on the basis of whether the lawyer’s assistance is an attempt to circumvent the basic purpose of Rule 4.2, to prevent a client from making uninformed or otherwise irrational decisions as a result of undue pressure from opposing counsel.”

To protect against overreaching, the opinion advises that a lawyer “must, at a minimum, advise her client to encourage the other party to consult with counsel before entering into obligations, making admissions or disclosing confidential information. If counsel has drafted a proposed agreement for the client to deliver to her represented adversary for execution, counsel should include in such agreement conspicuous language on the signature page that warns the other party to consult with his lawyer before signing the agreement.”

The concerns expressed about Opinion 11-461 focus on the issue of whether it is overreaching for a lawyer to “script” a client’s conversation with an opposing party or to draft a document that the client would ask the opposing party to sign. Among the experts in the ethics field who took issue with the opinion in comments posted on the APRL discussion list is William J. Wernz. He is of counsel at Dorsey & Whitney in Minneapolis and served as the firm’s ethics partner from 1992 to 2009.

Wernz said the opinion cautions of Bench & Bar, a publication of the Minnesota State Bar Association. “The latter level of involvement is perceived as an ‘end run’ on the protections of Rule 4.2 and thus has been found to violate the rule and can subject the attorney to discipline.”

In his article, Cole wrote that his office has decided not to follow the ABA opinion, “at least to the extent it authorizes an attorney to against overreaching but also permits actions that could amount to overreaching, such as a case in which a lawyer drafts a document that the client would take to the opposing party when it is unlikely that the opposing party would ask his or her own attorney to review the document before signing it. Wernz maintained that the ethics committee’s interpretation of what is permissible under Model Rules 4.2 and 8.4 goes beyond the general thinking on the issue.

The Office of Lawyers Professional Responsibility for the Minnesota Supreme Court reached a similar conclusion. “It has long been the position of the director’s office and its interpretation of Rule 4.2 that an attorney may initiate the idea of the client contacting the adverse party directly but may not script any such communication or draft an agreement to be presented to the adverse person, even at the client’s request,” stated director Martin Cole in an article posted in the online version script a communication or draft an agreement for the client to present to a represented adversary.”

But Cole also emphasized that the decision is something of a special case. “It is the rare instance when this office will take a position contrary to a formal ABA opinion,” wrote Cole. The ABA ethics committee “is composed of experienced individuals who take their task very seriously, issuing a small number of thoroughly researched and annotated formal opinions annually. Most such opinions are on topics of timely interest and provide reasoned guidance on interpreting the applicable rules.”

Critics of the ABA opinion have not advocated scrapping it altogether. “I think it can be fixed,” Wernz said. And Frederick said that anything the ethics committee might decide to do with the opinion is unlikely to be drastic. “We still think lawyers need advice on the subject,” she said.