Order in the Court: Fear Is the Biggest Obstacle to Effectively Organizing Your Case 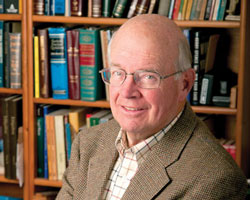 Editor’s Note: Jim McElhaney’s 25-year run as Litigation columnist for the ABA Journal will come to a close next fall. During those years, McElhaney’s straightforward advice on trial practice became one of the most popular features in the magazine. To commemorate McElhaney’s contributions, the Journal is reprinting some of his “greatest hits” from the past quarter-century. This article originally appeared in the Journal’s March 1995 issue under the headline “Putting the Case Together.”

“What’s the matter?” I said to Judge Wallop. “You look like you were just assigned a hundred habeas corpus petitions to review by Monday morning.”

“Worse than that, Jimmy,” said Judge Wallop. “I’m three weeks into a case that’s being tried by eight lawyers—three on one side and five on the other—who have no idea how to put a case together. They’re supposed to be some of the best lawyers in the country, but I’m in agony. One of them is even on your faculty at the law school.”

“He’s bringing students from his advanced commercial litigation seminar to watch,” said Judge Wallop. “Warbler says it’s so they can see how a real case is tried.

“This afternoon was embarrassing,” said the judge. “One of Warbler’s students caught me in the hall. First she made me promise not to tell Warbler she’d said anything to me. Then she asked if all commercial cases were tried in such a strange, repetitive, disconnected way.”

“I took a risk and went for the truth,” said Wallop. “I told her that honest feedback was the only thing that could keep even an emperor dressed—much less in decent clothing—and no one was critiquing Warbler.”

“Nice line,” I said, “but not very specific. What’s wrong with the way the case is being tried?”

“It just isn’t put together,” said Wallop. “Most of the individual parts are all right, but they don’t mesh.

“For example, as soon as the opening statements are over, Warbler starts reading stipulations. He has 27 different factual agreements he reads to the jury. Points that belong in different parts of the case. Some relate to contract formation, others to whether there was a breach; others went to lost profits and the amount of damages; and still others were concerned with whether the plaintiff had a duty to mitigate damages.

“Jimmy,” Wallop said, “Warbler read stipulations for more than half an hour.”

Then Angus looked up. “Sounds like you had your eye on the clock, judge,” he said. “Why didn’t you stop him?”

“I did,” said Wallop. “I suggested he read his stipulations throughout the trial, as they became relevant to what the witnesses would be saying. Then Warbler tells me the stipulations are already relevant because of the issues in the case, and he shoots a look toward his little cheering section in the gallery.”

“I resisted saying something sarcastic and let him go on. I didn’t feel like humiliating him in front of his students.

“But when they started putting the witnesses on, it got even worse. If there is any rational order to their proof, it escaped me. It seems as if they’re calling every witness who knows anything at all about the facts in the case.

“To Warbler and his crew, there are no good witnesses or bad witnesses—there are just witnesses. And every one of them tells everything he or she knows about the case.

“It’s the same thing with documents. Every piece of paper that has anything to do with the failure to supply the right kind of glue for the plaintiff’s manufacturing process has been introduced into evidence.”

“Judge,” I said, “I hate to tell you this, but what you’re describing isn’t all that unusual. It’s bleak, boring and wastes a lot of time—but it’s fairly common. The well-tried commercial case is the exception, not the rule.”

I already had my pad out when Angus got started. Here are my notes on what he said:

We’re afraid of missing something, particularly in a complex case. We worry that a harmless-looking memo actually may turn out to be a smoking business record. So we figure it’s better to call the extra witness, introduce the next document and read the very last stipulation than to risk leaving something out. After all, it’s easier to get sued for not doing enough than for doing too much.

Our traditional pattern of over-inclusiveness got a lot worse during the litigation explosion of the 1970s and ’80s, when suddenly there was a national body of litigators who did not actually try cases but only conducted discovery and wrote case evaluations.

If that’s what you do, your work is not done until you’ve raked every leaf and looked under every stone. Not surprisingly, that same mentality started infecting trials.

And some of it comes from the misguided notion that “the bigger the stakes, the longer it takes.” In business litigation, there aren’t many important trial lawyers who pride themselves on trying short cases. Plaintiffs personal injury lawyers, on the other hand, like to keep their cases short and to the point. Maybe it’s because the contingent fee doesn’t get any bigger if the trial takes an extra week.

If there is only one way you can prove an essential fact, you’re pretty well stuck. Call the witness or introduce the document and that’s it. But most of the time, you have a choice. And you have to start asking yourself questions:

• What is the most interesting way to make this point: eyewitness, chart, diagram, expert?

• What kind of demonstrative evidence am I going to use, and how do I integrate it with the testimony?

• How do I present the stipulations so they nail down the facts rather than get ignored?

• Who is the best witness to make this point? The answer is not always obvious. Good personal injury lawyers, for example, avoid having plaintiffs tell about the pain and what this injury has done to their lives. Instead, they use family members to tell how Mom isn’t able to help with homework or why Dad can’t play catch anymore.

YOU CONTROL THE STORY

The story won’t tell itself, and don’t count on the witnesses to tell it for you. That’s your job.

Samuel Johnson, the English lexicographer and man of letters, made that point in the 18th century. “Lawyers are a class of the community who, by study and experience, have acquired the art and power of arranging evidence, and of applying to the points at issue what the law has settled,” said Johnson, as quoted by James Boswell in his Aug. 15, 1773, entry from The Journal of a Tour to the Hebrides with Samuel Johnson, LL.D.

Put the facts together so they make sense. There is no one right way to tell any story. You can start where you want and end where you want. You can be short and quick or long and slow. But if you are confusing, your case is in trouble.

And lots of lawyers are confusing. It’s partly a matter of language. We use words that other people have trouble pronouncing, much less understanding. Part of it is organization. If there is a profession that delights in a twisted path, it is ours. But most of our power to confuse comes from using needless details.

Wait a minute, you say. What are you talking about?

Just this: To most people, a precise detail is more than background information—it’s a promise of relevance. When you tell the jury that negotiations started in the summer of 1989, that’s just background. But when a witness says contract discussions began on July 9, 1989, in the Algonquin Hotel, the message is a virtual command: “Remember the time and place. It’s important.”

But it’s not. It almost never is. And we clog people’s minds with immaterial minutiae. Then we’re surprised when people get lost trying to follow our story.

The message? Be careful with details. Push the points that count, not every fact you can think of.

Plan your storyline so it takes advantage of your strengths and deals with your weaknesses. Group your evidence—witnesses, documents, stipulations and demonstrative evidence—around your basic storyline. Begin and end with powerful facts that make an impact, and call credible witnesses who are easy to understand.

A tall order you may not be able to fill? Of course. We’re talking about ideals, not something you can execute in every situation. The compromises you make in a given case are what make it the art—not the science—of advocacy.

LOOK OUT FOR THE CHOP

Lots of witnesses fit in more than one place. What do you do? Chop up their testimony and call them back to the stand as the case develops? Or chop up the case by having each witness give his or her entire testimony at once?

There is no perfect answer. Most lawyers do a little of both. But usually, the longer the case, the harder it is for the jury to put evidence on hold and then bring it back later when it fits.

One last point: The order of proof—the storyline of the case—need not be organized in the same way as your opening statement. Take Warbler’s case, for example. An entire furniture manufacturing operation was shut down for months because the only supplier of a revolutionary new adhesive had breached its contract.

The opening statement could start with the story of trust: how an entire line of furniture was designed around this new product and the promises that were made to keep supplies of it coming.

Then think of the impact on the jury when the plaintiff’s first witness is a foreman from the factory who tells the story of how one day everything stopped.