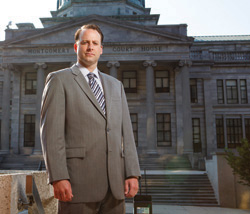 Peter Smith: “If victims don’t call, then the police don’t get contacted until one of these incidents reaches a boiling point.” Photo by Gene Smirnov.

According to her lawyers, Briggs’ reluctance to call the police is not unusual for victims of domestic violence in Norristown, a northwestern suburb of Philadelphia. The problem, they say, is a local ordinance that ultimately punishes tenants who require repeated police assistance because of domestic violence.

Norristown Municipal Code § 245-3 states that landlords are responsible for “disorderly behavior” by tenants currently in their rental units, as well as tenants’ family members and guests. Under the ordinance, disorderly behavior includes “domestic disturbances that do not require that a mandatory arrest be made.”

Briggs is a single mother with two daughters, ages 21 and 3. She is no longer with the man she says was abusing her. But when Briggs was still in a relationship with him, she was terrified of being evicted from her apartment.

“If she were to be evicted, the consequences to her would be devastating,” says Peter M. Smith, an associate at Philadelphia-based Pepper Hamilton and one of Briggs’ lawyers in the case. “It would be hard for her to find a new place to live. She doesn’t have a lot of money to put down on a new place, and there would be records of her prior eviction.”

In April, the American Civil Liberties Union and Pepper Hamilton filed a lawsuit against Norristown on Briggs’ behalf. The complaint, filed in the U.S. District Court for the Eastern District of Pennsylvania, claims that Norristown’s municipal ordinance violates Briggs’ constitutional rights, including procedural and substantive due process, alongside a number of other claims.

Briggs’ lawyers argue that the ordinance violates a well-established First Amendment right to petition the police. However, Briggs’ lawyers say, there are no U.S. Supreme Court cases directly on point.

“There is a right to call the police—obviously not crank calls, but for legitimate reasons,” says Sara J. Rose, a staff attorney for the ACLU of Pennsylvania. “Our primary argument is that Norristown’s ordinance chills tenants from exercising their right to call the police. We believe there is a huge human cost to these ordinances, especially on victims of domestic violence.”

In addition, Briggs’ lawyers argue that the ordinance violates the federal Fair Housing Act and the Violence Against Women Act, which provides that incidences of actual or threatened domestic violence shall not be good cause for terminating the assistance, tenancy or occupancy rights of victims in public or Section 8 housing.

Robert Glisson, Norristown’s interim municipal administrator, did not return several requests for comment. However, Glisson issued a statement to the International Business Times in which he asserted that the provision “does not, in any way, discriminate against any persons, nor does it punish victims of domestic violence. Domestic violence is abhorrent to society, and the Norristown Police Department remains constantly vigilant for those crimes.”

According to the Philadelphia Inquirer, Norristown Council President Gary H. Simpson said in a statement that the council “is looking to protect not only those who suffer from these deplorable acts, but also those who believe they deserve a better quality of life. We are looking to place greater levels of accountability on the landlords.”

Norristown isn’t the only jurisdiction with such laws designed to reduce disorderly or nuisance behavior. Similar ordinances exist throughout the country—in larger cities like Milwaukee, Los Angeles and Houston, and smaller towns like Tigard, Ore.

In general, disorderly behavior ordinances, also referred to as nuisance property ordinances, penalize landlords with tenants whose behavior prompts repeated police intervention. Often the ordinances provide for increased fines if the landlord fails to curtail the disruptive behavior or evict the tenant.

A handful of nuisance property or disorderly behavior ordinances specifically exclude domestic violence from the list of nuisance activities, according to “Unpolicing the Urban Poor: Consequences of Third-Party Policing for Inner-City Women,” a study published this year in the American Sociological Review.

But Matthew Desmond, co-author of the study, says “nixing domestic violence from the list of nuisance activities is likely not enough to protect battered women from the ordinance. Domestic violence incidences often hide behind other police designations, such as ‘property damage’ or ‘subject with weapon.’ ”

In addition, Desmond points out that the ordinances are often written in such a way that it is up to the landlord to reveal that the so-called nuisance activities were related to domestic violence. “Although some landlords will raise this issue with police, others will keep quiet and simply evict the tenant, implementing their own quick fix,” says Desmond, an assistant professor of sociology and social sciences at Harvard University.

Advocates of ordinances covering disorderly behavior or nuisance property emphasize that they are needed to help ensure the peace, health, safety and general welfare of the public.

“City politicians and police officers have championed the nuisance property ordinance to save money and conserve resources,” says Desmond.

Smith argues that behavior or nuisance ordinances ultimately increase, not decrease, the burden on law enforcement.

“If victims don’t call, then the police don’t get contacted until one of these incidents reaches a boiling point, where the police have to come in greater urgency and greater numbers to deal with a more significant consequence,” Smith says.

TO SERVE AND PROTECT

Advocates speaking on behalf of victims of domestic violence emphasize that disorderly behavior or nuisance property ordinances not only strip them of their police protection but also embolden abusers to escalate violence directed against victims. “How outrageous is that?” says Lynne Z. Gold-Bikin, a partner in the Norristown office of Weber Gallagher Simpson Stapleton Fires & Newby and former co-chair of the American Bar Association’s Domestic Violence Commission. “The police are supposed to protect the public, and if someone says she’s been beaten, then it’s the police’s job to help her.”

In the lawsuit against Norristown, two ordinances are at issue. The original ordinance authorized the city to revoke or suspend the rental license of a landlord owning a property to which the police had responded to three instances of disorderly conduct within a four-month period. In addition, the Norristown Municipal Code authorized the police to forcibly remove the tenant from the property.

After discussion with Briggs’ lawyers, the Norristown Municipal Council repealed the ordinance. However, the council subsequently passed a second ordinance, which the ACLU describes as “nearly identical.” The new ordinance does not allow the police to evict a tenant, but instead permits Norristown to assess a series of escalating criminal fines against the landlords, thus giving landlords incentive to evict the tenants themselves.