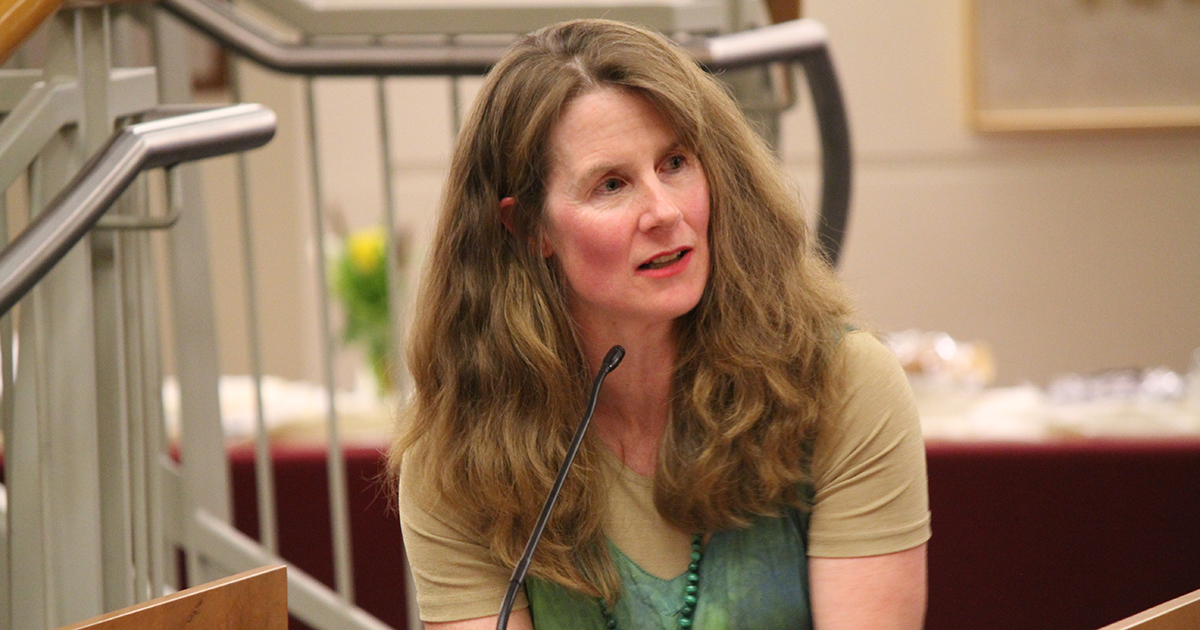 University of Oregon School of Law professor Mary Wood, a former hazardous waste lawyer, never foresaw that she would become a pioneer in climate change law. It wasn’t even an established practice area in 2005 when Hurricane Katrina—which many scientists attributed to global warming—changed the course of her life from more than 2,000 miles away.

A colleague in New Orleans had sent a broad email reporting that he had just watched a dead body float past his house. Wood found it so disturbing that she explored the science of extreme weather events—and she emerged convinced that the judicial system has a responsibility to step in because regulatory agencies were not adequately enforcing air pollution laws to control carbon emissions.

Wood was raised on the banks of the Columbia River near Vancouver, Washington, in a family that she says always regarded nature as a trust for present and future generations. She has a long lineage of prominent conservationists in the Pacific Northwest. Both of her great-grandfathers fought in the early 1900s for the preservation of rivers and forests from clear-cutting.

During high school in the late 1970s, she says, “I saw that nature surrounding me was being devastated.” She became involved and later decided to go to law school. She wanted to become an environmental lawyer so she could use the law to try to protect nature.

For two years, she was an associate at a large firm in the Pacific Northwest and enjoyed working on two major pro bono environmental cases—one against the city of Portland for polluting the river with sewage overflows and the other to stop the U.S. Forest Service from clear-cutting old growth forest in central Oregon.

She left the firm in 1991 to enter academia. “I thought I could be much more effective as a professor, producing scholarship that could make a difference,” she says.

Wood realized the immediacy of the climate problem in 2006 when she read an article in The New York Review of Books titled “The Threat to the Planet” by former NASA chief climate scientist Jim Hansen. He pointed to evidence that global warming was caused in large part by fossil fuel emissions, and that it posed a ticking time bomb for humanity.

“I just was struck,” says Wood, who delved further into research. “I had basically ignored climate up to that point. Like a lot of people, I thought it was a far-off issue. Now I felt I had to do something.”

Since then, she has been laser-focused on providing climate change lawyers with the concepts needed to spur judicial intervention: legal grounds premised on compelling scientific evidence. With climate change law still in its infancy, the government’s responsibility had not been firmly established.

Described by Gus Speth, a law professor and a former dean of the Yale School of Forestry & Environmental Studies, as “one of the most creative legal scholars around,” Wood wanted to put the issue of climate change before the courts. But as an academician, she doesn’t litigate.

Wood’s articles and book, Nature’s Trust: Environmental Law for a New Ecological Age, have been cited in litigation, and lawyers say they have been influential in recent cases. Her research, and that of her students at Oregon Law’s Environmental and Natural Resources Law Center, where Wood is faculty director, has produced crucial science-based legal support for many of today’s major climate change cases.

One case in particular has made worldwide headlines. In Juliana v. United States, 21 American youths are suing the federal government to force changes to practices that worsen climate change. The case was spearheaded by lawyer Julia Olson, chief legal counsel, founder and executive director of Our Children’s Trust based in Eugene, Oregon.

The nonprofit organization coordinates a global climate litigation campaign on behalf of youth. Olson heard Wood present her atmospheric trust principle in 2010 at the University of Oregon’s public interest environmental law conference and decided to put the framework into action.

While not involved as a litigator in the case, Wood has been “a driving force” behind Juliana, says Speth, who was chair of the Council on Environmental Quality during President Jimmy Carter’s administration. Referring to the groundbreaking climate change case, he says, “She not only helped frame the basic legal theories but came up with innovative concepts that are needed in a case like this. As [the presiding federal] judge said of the Juliana case, ‘This is no ordinary lawsuit.’ ”

Gerald Torres, a law professor at Cornell University and a fellow at the Cornell Atkinson Center for Sustainability, concurs. He says Juliana “grew directly out of Mary’s insights.” While Wood is widely considered a pioneer in climate change litigation, Torres says her contribution is far greater.

“She’s also a pioneer in using environmental law to force us to think about fundamental issues like, ‘What is the government’s duty to its people? What is government for?’ This isn’t an idea she just tripped over,” he says.

Wood’s writings also trailblazed climate law by fusing science with legal doctrine. Scientists had quantified how much current emissions exceeded the safety level and how temperatures would escalate. Wood contacted Hansen and told him that the missing piece was a “scientific prescription for the planet” calculating necessary emissions reduction.

She asked him whether he would write one. He agreed and assembled a blue-ribbon team of scientists who published a paper in 2013 titled “Assessing ‘Dangerous Climate Change’: Required Reduction of Carbon Emissions to Protect Young People, Future Generations and Nature.”

“That prescription became a core part of the climate cases because it stated government’s trust duty in concrete science-based terms,” Wood says.

Wood is now focused on the next step in applying the public trust doctrine to the climate emergency: using it to sue fossil fuel companies for natural resource damages to the atmosphere. Like money recovered for cleaning up an oil spill in the ocean, she says, funds could be used for atmospheric cleanup, such as farming and forestry projects to sequester carbon in soils and trees.

She hopes that state attorneys general, tribes, local governments and vulnerable nations will “take the idea and run with it, as Julia [Olson] did in 2010 with the atmospheric trust litigation strategy.”

Update: In January 2020, the San-Francisco 9th U.S. Circuit Court of Appeals dismissed Juliana v. United States. In an interview with the New York Times, Olson said she would appeal the ruling.