Our Pleasure to Serve You: More Lawyers Look to Social Networking Sites to Notify Defendants 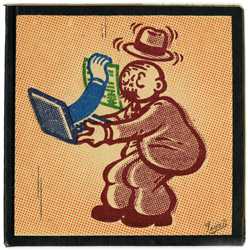 Although Jessica Mpafe had not seen her husband in years, she assumed he moved back to West Africa’s Ivory Coast. Mpafe of Minnesota had no physical address to serve him with divorce papers. So she asked the court whether she could send the notice by general delivery, where the post office holds mail until the recipient calls for it.

Kevin S. Burke, the Hennepin County, Minn., judge presiding over the case, thought that would be a waste of postage.

“General delivery made sense 100 years ago, but let’s be real,” says Burke, implying that few use it anymore. Nor did the judge trust publishing legal notices in a trade paper when the defendant can’t be located. “Nobody, particularly poor people, is going to look at the legal newspaper to notice that their spouse wants to get divorced,” Burke says.

On May 10 the judge wrote an order authorizing Mpafe to serve notice of process to her husband by email, “Facebook, Myspace or any other social networking site.”

His order stated that while the court allowed service by publication in a legal newspaper, it was unlikely the respondent would see it.

“The traditional way to get service by publication is antiquated and is prohibitively expensive,” Judge Burke wrote. “Service is critical, and technology provides a cheaper and hopefully more effective way of finding respondent.”

OTHER COURTS ARE FANS

It was something of a radical move. While courts in Australia, Canada, New Zealand and the United Kingdom embrace electronic legal notice, it’s rare in the United States. Many state and federal statutes disallow electronic service of process, lawyers say.

In federal cases, some attorneys cite Federal Rule of Civil Procedure 4(f)(3), which allows service only for foreign defendants “by other means not prohibited by international agreement, as the court orders.”

In a 2002 case, the 9th U.S. Circuit Court of Appeals at San Francisco upheld a default judgment against Rio International Interlink, a Costa Rican gambling website that was served electronically after traditional methods failed. The trademark infringement action was brought by Rio Properties Inc., a Las Vegas hotel and casino.

The defendant, wrote Judge Stephen S. Trott, “had neither an office nor a door; it had only a computer terminal. … When faced with an international e-business scofflaw playing hide-and-seek with the federal court, email may be the only means of effecting service of process.”

Adam C. Losey would like to see courts take that a step further, and in 2009 he co-wrote a Federal Courts Law Review article advocating domestic electronic service of process.

“You would be surprised at how many people evade service but update their Facebook profile on a near daily basis,” says Losey, a Foley & Lardner associate who practices out of Orlando, Fla., and New York City.

“A lot of the way the law works in giving notice to parties is just tethered to antiquated ways of communication that no one uses anymore,” says Losey, who wrote the article with retired U.S. Magistrate Judge Ronald J. Hedges and lawyer Kenneth N. Rashbaum of New York City’s Rashbaum Associates.

Most lawyers think it’s only a matter of time before electronic service of process becomes commonplace. But few agree on how to implement it or on how long it would take to make it acceptable. For example, an email notification may be unwittingly discarded into a junk file.

“Would I like to see electronic service? Yes. Is it realistic? No,” says Robert G. Markoff, a Chicago lawyer who does collections work. He notes that under the Fair Debt Collection Practices Act, collectors may call a debtor only on his or her landline unless the individual gives permission in writing to do otherwise.

The law doesn’t mention cellphones or email, says Markoff, because it was written in 1978. And forget publishing notice on someone’s Facebook page. If anyone other than the debtor saw the posting, that would equate to “publishing to third parties,” Markoff says, which would violate the statute.

“It’s so silly, the things we have to go through,” says Markoff, a partner with Markoff & Krasny. “And would people rather have, in the privacy of their own computer, a notice to come to court or a sheriff’s deputy knocking on their door for the whole world to see?”

Andrew M. Zacks, a San Francisco lawyer, represents landlords. Even though the lawsuits usually involve defendants’ residences, Zacks says, many know how to avoid being found. He’d like to write lease agreements where both parties consent to electronic notice in the event a lawsuit arises, with the contract listing the parties’ appropriate emails.

“The courts absolutely wouldn’t allow it,” says Zacks, a partner with Zacks & Utrecht. State legislation would be required to make such lease provisions enforceable, he adds, and he plans to discuss the idea with property owner advocacy groups.

“That would be hugely beneficial from a cost and justice point of view,” he says. “In my world, one of the major expenses and delays associated with litigation for property owners is avoidance of service.”

If state or federal legislation to adopt electronic service of process were introduced, say many lawyers, consumer advocacy groups would likely object. However, according to Glenn Rawdon, program counsel for technology with the Legal Services Corp., most legal aid groups see electronic notice in the future. He mentions a 2010 study by the Pew Research Center’s Internet & American Life Project that found 46 percent of Americans earning less than $30,000 per year have some kind of wireless Internet access.

Rawdon says e-filing “was designed to bring in big law firms with big lawsuits. But if you make electronic service available, it has to be available for everyone.”

The biggest concern Rawdon has about electronic service is how it would work for pro se litigants. The courts would need to build a secure e-filing system, he says, where someone could check on case information, docketing and whether their pleadings were served. He would also like to see courthouse hardware for public use. If individuals don’t have Internet access, Rawdon says, public computer banks at libraries may not be all that helpful because usage is often limited to 20 minutes.

“Many of our low-income clients do not have email addresses or home computers,” Rawdon says. “Will we allow e-service via text messaging since most low-income adults have cellphones?”

Also, the system could not require a credit card to verify identification, Rawdon says, because many low-income litigants do not have credit cards.

“And not everyone is proficient enough to navigate the system,” adds Rawdon, who previously served as the managing attorney for Legal Services of Eastern Oklahoma. “And what about someone who is limited in English proficiency? Or waivers for filing fees?”

Markoff and Zacks say electronic service of process will be common in about 20 to 30 years; Rawdon says it will happen in the next five. In the meantime, Rawdon is working with the Self-Represented Litigation Net work, a group of organizations aiding those working pro se.

An expansion of electronic service of process could be risky too, says Joseph DeMarco, a partner with New York City’s DeVore & DeMarco. In his state, defendants can receive notice of process by first-class mail or a process server at their home or workplace. If the party doesn’t answer the door, the notice is affixed to it. With an affidavit, that is an acceptable form of service.

“Most lawyers want personal service. It’s safer,” says DeMarco, adding that to ask the court for electronic service, you’d have to file a motion, which comes with a $150 filing fee. “If I know where someone lives, why in God’s name would I want to risk them not getting notice?” asks DeMarco, former co-chair of the ABA’s Cyber Crime Committee of the Criminal Justice Section.

“If you do it right, it’s a heck of a lot more reliable way to do it,” says Losey, noting that Microsoft Outlook offers tracking options, including notice that the communication was received.

“If you nail something on someone’s door, will they actually see it?” he asks. “And can you verify that?”