Outtakes from a Treatise: Garner and Scalia Present a Quiz on Textualism: Part 1 of 2 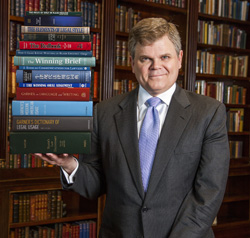 We’re all textualists, to one degree or another. That is, when it comes to statutory or contractual interpretation, everyone—even the most ardent “purposivist” or “consequentialist”—says that we must begin with the words of the text.

We look at the controlling words, we study their grammatical relationships, and we consider the context created by the document as a whole and the longer context in which the document was written (the time and place). Both consequentialists (who consider the consequences of the decision paramount) and purposivists (who consider the broad purposes of the text as superior to the actual words) go well beyond or outside the text—but at least they start there.

What all this means more specifically would take a treatise to explain, and I’ve recently written that treatise with Justice Antonin Scalia. It’s called Reading Law: The Interpretation of Legal Texts.

What I’m giving you here is a part of the book that, after much hand-wringing, we omitted. It’s a textualist quiz based on actual cases. It was suggested to us by the dean of the University of Texas School of Law, Ward Farnsworth. In January, Justice Scalia and I spent the better part of a day working through the first 20 of the 25 questions and answers. In this column (part 1), you have questions 1–12; in part 2, you’ll have 13–25.

“Publish it elsewhere, Bryan,” Justice Scalia told me in March. So that’s what I’m doing.

In offering this set of what we consider interesting and challenging exercises, we do not mean to suggest that all questions of statutory or contractual interpretation have a straightforward, easily findable answer. We do mean to show that it is often possible to isolate the germane textual facts that should, in the hands of a skilled textualist, predictably result in consistent answers. As with any skill, practice leads to improved interpretive reasoning. As you try answering each question, identify not just the outcome but also the canons of construction that must be considered.

Our answers are normative rather than descriptive. They are the answers of a textualist. Purposivists, consequentialists and hence some courts would reach different (and variable) results.

2. An 1892 state suffrage statute provided that “any woman” could vote for school officers if she belonged to one of three classes (incorporated by reference from the state constitution): (1) those who were electors in 1848 (no woman had been); (2) those who had been naturalized before 1870 (a very small number of women had been); and (3) those who were U.S. male citizens over the age of 21. Should the word male in category 3 be disregarded?

3. The District of Columbia Code requires a school official to make a report to the police or child-welfare agency if the official knows or reasonably suspects that a child “has been or is in immediate danger of being a mentally or physically abused or neglected child, as defined in § 16-2301(9).”

The section referred to defines neglected child as one who has been abused or neglected by the child’s “parent, guardian or custodian.”

Three classmates of a preschooler sexually molested her for several consecutive days. School officials did not report the incident to the police or child-welfare agency, as a result of which the principal and vice principal were charged with and convicted of violating the mandatory-reporting statute. On appeal, the school officials argued that because of the incorporated definition, the only mandatory reporting incidents are those perpetrated by a “parent, guardian or custodian.” Were they right?

5. A state statute authorizes courts to order convicted criminals to make restitution to the victims of their crimes.Victim is statutorily defined as “a person who suffers economic loss as a result of a crime.” The defendant, a dog-kennel owner, was convicted of recklessly starving dogs. The dogs were turned over to the state society for the protection of animals so that they could be treated and cared for. As a condition of the defendant’s probation, the trial judge required him to reimburse the society for the expense of nursing the dogs back to health. On appeal, the defendant contends that the society is not an authorized claimant for restitution under the statute because the society is not a victim. The prosecution counters that the society is a victim because it suffered economic loss as a result of the crime—the expense of caring for the injured dogs. Which side is right?

7. A state antidiscrimination statute, enacted in 1983, prohibited discrimination on the basis of age. In 2006, the legislature amended the statutes governing retirement of state employees to give retirees the choice of receiving their pensions in a lump-sum payment if they were under the age of 55, but with the forfeiture of some benefits if they were over 55. The state equal-opportunity commission has sued the state-employees retirement system on behalf of an over-55 retiree, contending that the age-based forfeiture was prohibited. How is the conflict between the two statutes to be resolved?

9. A service-of-process statute requires that if the District of Columbia is sued, the plaintiff must mail or deliver a copy of the complaint “to the mayor of the district and the corporation counsel of the district.” A plaintiff sued the district for personal injuries she suffered when a fire truck struck her car. The trial court dismissed her complaint because she had served only the corporation counsel, not the mayor. On appeal, she argues that the purpose of the statute has been substantially satisfied by service on corporation counsel, especially since that officer is also the statutory agent of the mayor. Is she right?

10. A contract entitles a caterer to be reimbursed for the expense of supplying “trays, glasses, dishes, utensils or other tableware.” In his reimbursement schedule, the caterer lists $1,500 for paper napkins. Is this expenditure reimbursable?

11. A federal statute allows the government to seize “any property, including money” if it has been used for an illegal gambling business. The U.S. government has begun forfeiture actions against 13 parcels of land allegedly used in an illegal gambling business. The trial court interpreted the term property not to include real property and therefore dismissed the forfeiture actions—partly because every reference to the clause in the legislative history contemplated personal, not real, property. The court also reasoned that including money limits any property so that it excludes realty. Further, the court invoked the rule of lenity. Did the trial court err?

12. A federal criminal statute prohibits “willful interference with the delivery of mail.” An arrest warrant is issued for an accused murderer who happens to be a postman. While delivering the mail, he is arrested by a county sheriff. A federal prosecutor indicts the sheriff for violating the mail statute by interfering with the postman. Should the prosecution succeed?

The section numbers cited are to the text of Reading Law: The Interpretation of Legal Texts.

1. Answer: No, the defendant does not go free. The sense is the same, and the omission of the definite article does not vitiate the indictment. Canons involved: (1) the surplusage canon (every word is to be given effect [§ 26]), which does not control here because the word the adds nothing of substance; (2) the rule of lenity (§ 49), which does not apply because there is no genuine ambiguity. So the case is resolved by fair reading, as opposed to strict constructionism (§ 64).

2. Answer: Yes, male should be disregarded. The absurdity doctrine (§ 40) overrides the surplusage canon (§ 26).

3. Answer: A fourfold analysis: (A) the phrase as defined in modifies only neglected child—since that is the only relevant phrase actually defined in the section referred to; (B) the word child is grammatically understood after mentally or physically abused, according to the normal idiomatic principles of English grammar; (C) given that mentally or physically abused (child) is not defined in the statute, these words bear their ordinary meaning; and (D) because there is no genuine ambiguity in the statute, the rule of lenity has no relevance.

4. Answer: No, the statute is unconstitutional. The constitution specifies how superior court judges are to take office—not including gubernatorial appointment. The governing rule is the negative-implication canon. See § 10.

5. Answer: The defendant. The society is an organization that voluntarily takes care of abused animals. It can hardly be described as a victim having “suffered loss.” Canon involved: ordinary-meaning canon (§ 6).

6. Answer: No. The company may not harvest timber. The applicable rule is the ejusdem generis canon, which implies the word similar after other. See § 32.

7. Answer: The specific provisions of the 2006 retirement legislation prevail over the general age-discrimination prohibition of the 1983 statute. The general/specific canon governs. See § 28.

8. Answer: Although repeals by implication are not favored (§ 55), a later statute that flatly contradicts an earlier one must prevail. Here, the two provisions, and their concomitant penalties, are utterly inconsistent, and so the later-enacted statute impliedly repeals the earlier-enacted one. That is so no matter whether the harsher or the more lenient statute comes last. The rule of lenity (§ 49) has no applicability because there is no ambiguity.

9. Answer: No. Under the conjunctive/disjunctive canon (see § 12), two sets of papers and two instances of service are required—one on the corporation counsel and one on the mayor. The complaint should be dismissed for failing to com-ply with the statute.

10. Answer: No. Under the ejusdem generis canon the phrase or other tableware is limited to things of the same types as in the preceding list: trays, glasses, dishes, utensils. Those are sturdier items that are more or less durable (even if plastic); paper napkins are flimsy and are more often disposed of within seconds after use. The listed items are for serving food and facilitating consumption; paper napkins, by contrast, are for cleaning. If, as seems likely, the caterer drafted the contract, the contra proferentem canon would reinforce this result.

11. Answer: The trial court erred. Under the general-terms canon, any property is a general phrase that means what it naturally de-notes: “any property, real or personal.” The phrase including money does not limit the broad phrase that precedes: the ejusdem generis canon does not apply because (1) the broad words preceded the narrow words here, and (2) there is no “list” at all. The no-legislative-history canon precludes any consideration of the unpersuasive floor speeches that the lawyers have called to the court’s attention. The rule of lenity has no bearing because the language is truly unambiguous.

12. Answer: No. The proceedings against the sheriff should be dismissed. The government-agent exception applies: Criminal statutes do not apply to government agents in the lawful execution of their duties. The mens rea canon also exonerates the sheriff. See § 50.