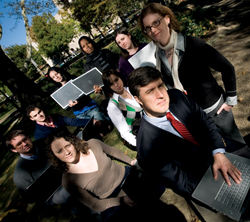 Jurist—Paper Chase is a robust legal news site filled with well-sourced and timely news. Much of the focus is on international law and world justice issues. And most of the work is done by a mostly volunteer group of some 30 law student reporters, editors and Web developers.

But like most critically acclaimed blogs, there is a single person and idea that led to online success. In this case, the man behind the blog is Bernard Hibbitts, a law professor and associate dean at the University of Pittsburgh.

Hibbitts—whose research sits at the intersection of law and the media—first launched the site that became Jurist in 1996, well ahead of its time. But even with the advent of social networking and the Net-melding effect that mixes news, commentary, opinion and gossip, Hibbitts has kept Jurist focused on straight, neutral reporting with a heavy emphasis on sourcing.

In Jurist’s online profile, the publication touts itself as an “online fusion of PBS and C-SPAN for legal news.”

The profile also says that “Jurist emphasizes documentation of legal events and prefers facts and true expertise to mere punditry.”

Is Jurist Paper Chase a blog? It uses blogging software and technology to bring its audience news from around the world.

But don’t let site founder Bernard Hibbitts hear you call it a weblog.

“We see ourselves more as a news service, and blogs relate to us that way,” he says.

Indeed, it’s a news site with an eye toward expansion. In addition to establishing a presence on the social network scene, with a page on Facebook and a feed on Twitter, Hibbitts is hoping to separate Jurist Paper Chase from its academic setting.

Hibbitts is working to have Jurist become a not-for-profit and break out of the academic environment. “There’s a large niche for the type of coverage we provide,” he says. And as the mainstream media organizations continue to veer away from substantive legal coverage, Hibbitts predicts there will be more demand for what Paper Chase in particular has to offer.

If this sounds more like a journalism enterprise than law school, Hibbitts would disagree.

“Law students, when they do this sort of thing, they’re doing public service,” he explains. The students are sharing information as they learn it, for free.

And in the job world, they will already have learned how to play a role in the community, where they’ve done research by navigating the raw Internet. That skill, Hibbitts says, will be valued by their future employers.

“Law firms will thank them for that afterwards,” he says.

Still, the move away from Pitt is a monumental change for an organization built largely by law professors and students.

Since the site’s founding in 1996, Jurist has involved students at the University of Pittsburgh School of Law. Hibbitts tells the ABA Journal that he always had one or two students working with him at a given time. “We learned HTML together,” he says.

But because so few law students had the tech chops to work early site iterations, Hibbitts essentially had to wait for technology to catch up to them. By 2003, blogging software had advanced enough that he could bring in a group of students—first 15 and eventually 45.

The site was primarily academics-focused back in the late ‘90s, with links to resources created by law professors. But increasingly, Hibbitts saw demand for current information and commentary on current events, notably the Clinton impeachment. “We knew where documents were and knew how to analyze them,” he says. “It was easy [for the site] to be drawn in that direction.”

When Hibbitts spoke to the ABA Journal, Jurist had more than 27,000 stories in its archive.

The site hopes to build a reputation for being trustworthy and useful.

And readers won’t see much Brittney or other Hollywood gossip on the site.

“Our focus is not really on the latest thing,” Hibbitts says. “At the end of the day, we’re interested in chronicling the big picture over time.”