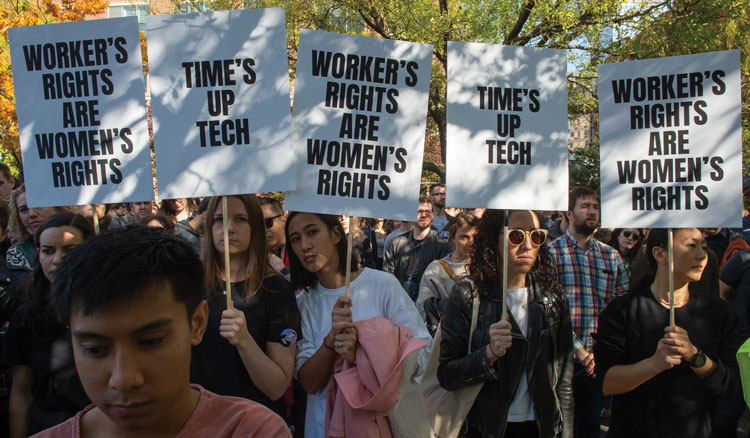 If you attended Venable’s Washington, D.C., summer recruiting reception for law students in June or DLA Piper’s Boston associate recruiting event in March, someone may have handed you a flyer on the way in about the big firm’s mandate that staff and associates sign arbitration agreements as a condition of employment.

In 2018, Harvard Law School did a voluntary survey of employers doing on-campus interviews, and 18 reported having arbitration as a condition of employment, according to a People’s Parity Project blog post. There were between 300 and 400 employers, with the vast majority being law firms, and about 90% participated in the survey, Mark Weber, Harvard Law’s assistant dean for career services, told the ABA Journal. This year, the survey was mandatory for employers participating in the law school’s on-campus interviews. The pool was the same size as in 2018, Weber says, but only six reported having arbitration as a condition of employment.

“We’ve heard that a lot of students attending law firm receptions didn’t realize that they might be forced to sign an arbitration agreement, and it was relevant to them. This is a tactic we found effective,” says Sejal Singh, a People’s Parity Project member who is in her third year at Harvard Law School.

Neither Venable nor DLA Piper have reached out to the People’s Parity Project, according to Singh. The firms did not respond to ABA Journal interview requests.

“We look forward to hearing from them that they dropped their forced arbitration agreements so we don’t have to flyer their event again,” Singh says. 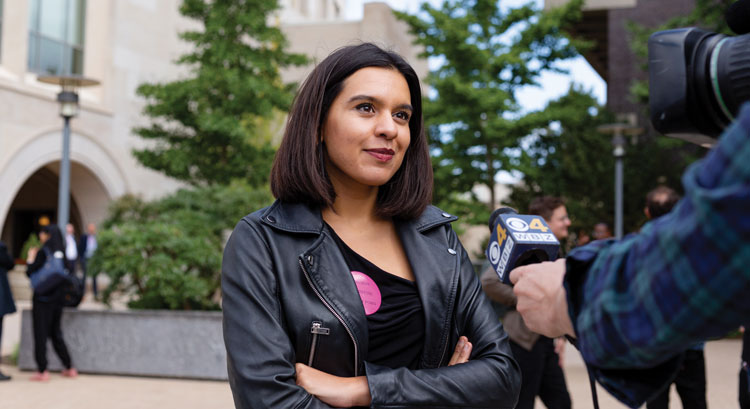 Also, the People’s Parity Project shares information on its website about which law firms require arbitration as a condition of employment for associates and staff. Since its founding last year, law students at other schools, including Yale University and Georgetown University, have joined, and the group is pursuing other campus affiliates nationwide.

One at a time

The People’s Parity Project underscores the notion that the most effective opposition to the prevalence of mandatory arbitration clauses is at the grassroots level. In addition to its work with law firms, the project worked alongside Google employees to pressure the company to drop forced arbitration for sexual harassment and assault complaints after more than 20,000 employees staged a walkout in 2018.

However at this point, the only thing keeping businesses from requiring arbitration in both employment and consumer contracts is bad press and perhaps not attracting sought-after candidates for high-level jobs. State and federal courts have found the agreements valid for some time, and in 2011, the U.S. Supreme Court held in AT&T Mobility v. Concepcion that state laws forbidding mandatory arbitration clauses and class-action waivers in consumer contracts were preempted by the Federal Arbitration Act. In the years since, the court has only strengthened the rights of corporations to force these agreements on employees and consumers. For instance, in 2018 the court found in Epic Systems v. Lewis that federal courts must enforce arbitration agreements according to their terms.

“By and large, it continues to grow,” says Jean Sternlight, a law professor at the University of Nevada at Las Vegas, whose academic work includes arbitration. “Companies have seen that they can use this to elude class actions, and it’s superattractive for them to do so.”

In February, a congressman and a U.S. senator, both Democrats, introduced the Forced Arbitration Injustice Repeal Act, known as the FAIR Act, which seeks to eliminate forced arbitration in employment, consumer and civil rights matters. Supporting groups listed in a press release about the bill include the People’s Parity Project, the National Employment Lawyers Association and the National Association of Consumer Advocates, an attorney organization.

In January 2019, the ABA’s House of Delegates passed a resolution that asks legal employers not to require mandatory arbitration of claims of unlawful discrimination, harassment or retaliation “based upon race, sex, religion, national origin, ethnicity, disability, age, sexual orientation, gender identity or expression, marital status, genetic information or status as a victim of domestic or sexual violence.” The House of Delegates adopted a similar resolution in 2018.

Some are dubious that the legislation will become law.

“Bills in Congress to reduce employment and consumer arbitration have failed repeatedly, including when Democrats filled both houses,” says Stephen J. Ware, a law professor at the University of Kansas whose academic work includes arbitration.

For decades, he says, both the plaintiffs bar and business groups have waged a costly battle around arbitration as a condition of employment or services. According to Ware, the phrase “mandatory arbitration” is often used by the plaintiffs bar, which opposes the practice.

“It’s a phrase like ‘pro-life’ or ‘pro-choice,’ you take a side,” he says. “The #MeToo movement has a lot of justified anger behind it, and the anti-arbitration folks were able to connect with that.”

So what do business groups call arbitration as a condition of employment?

“Something that sounds more flexible, like alternative dispute resolution,” says Tilden Katz, a Chicago lawyer and managing director of strategic communications with FTI Consulting. A significant portion of his work involves advising clients on how to balance what they are legally entitled to do with what is good policy, and how the decision will be seen by the public.

Large law firms, Katz says, have faced a fair amount of accusations involving gender harassment and discrimination, and requiring employees to resolve disputes through arbitration makes it seem as if BigLaw is not taking the matter seriously.

“You may be legally entitled to have it, but you don’t want to do it because it will anger other attorneys, clients and all the other people you care about,” he adds. “So a bunch of firms have gone back on the idea.”

This article ran in the September-October 2019 issue of the ABA Journal with the headline “Parity to the People: A group of Harvard law students is trying to get rid of mandatory arbitration clauses.”