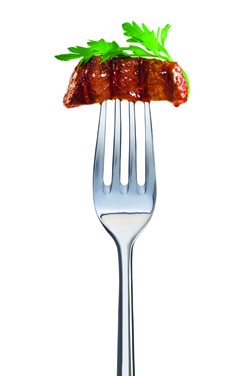 When is a steak not just a steak?

When it’s a Vegas Strip Steak, which its “inventors” say is so unique that it is deserving of a patent.

Introduced this year to a great degree of fanfare in the culinary and legal blogospheres, the Vegas Strip Steak is, according to its creators, akin to a New York strip steak—only better.

The 14-ounce cut of beef, which comes from a part of the cow usually reserved for hamburger, was discovered by an Oklahoma State University meat specialist by using knife strokes apparently so original that OSU filed an application with the U.S. Patent and Trademark Office. If granted, OSU and its stakeholders can charge licensing fees to packing plants that sell the cut to restaurants.

Despite a media blitz touting the secret steak’s originality, OSU is “making no public statements” about the elusive cut, says Steven Price, who is handling licensing for the steak for the school’s technology development center.

Santa Clara University law professor Tyler Ochoa thinks the patent filing is a marketing tactic. “By filing a patent application, they’re managing to get all sorts of people talking about it,” he says. “But just because it’s a PR maneuver doesn’t mean it’s not legitimate.”

But whether a product or process is patent-worthy is a thorny issue, particularly when it comes to meat.

“A hunk of meat can’t be patented because it’s a product of nature,” Ochoa explains. “But they could possibly patent the process of extracting steak from the beef carcass.” In that case, OSU would have to prove its process is novel and nonobvious. “People may say that once a butcher knows where the cut is, then it’s obvious,” Ochoa says. “But that’s not the standard. The standard is whether the process would be obvious to someone with ‘ordinary skill in the art’ at the time it was invented.” In that way, a patent protects against reverse engineering.

But if diners are willing to pay more for an authentic Vegas Strip Steak, the more valuable protection may be a trademark. “Even if the patent winds up being invalid, a trademark can keep anyone else from calling it a Vegas Strip Steak,” Ochoa explains. “Right now, they’re marketing it as a riff on the New York strip steak, a generic term. Once something becomes generic, it can’t be trademarked. They’re promoting the steak in a way that could harm a valid trademark.”

Out of 247,000 patents issued last year, the PTO approved close to 1,200 related to food or edible material. “What makes this unusual is the marketing campaign” related to the patent application, Ochoa says.