Patents and Patients: Personalized Medicine Is at the Heart of High Court Case 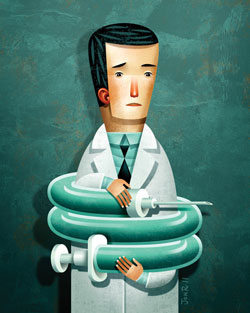 Patents, the laws of nature and health care costs—as well as the question of whether a patent was infringed because a doctor kept key medical information in her memory—all come together before the U.S. Supreme Court this month.

But the case of Mayo Collaborative Services v. Prometheus Laboratories Inc. has broader implications. It may signal the future of the young but developing area of personalized medicine, in which treatment of a disease focuses on the individual patient. Doctors use the patient’s genetic and clinical information to formulate a response.

“This case basically has the heart of the personalized medicine industry hanging in the balance,” says Edward R. Reines, a partner specializing in patent litigation at Weil, Gotshal & Manges’ Silicon Valley office in Redwood Shores, Calif.

The justices must weigh whether a commercial arm of the famed Mayo Clinic, as well as the Rochester, Minn.-based clinic itself, infringed the patents of a San Diego-based pharmaceutical and diagnostic company covering its method of determining the proper dosage for drugs that treat gastrointestinal disorders such as Crohn’s disease.

Set for argument on Dec. 7, the case raises the question of whether patents have been granted for a natural phenomenon—such as biological interactions—in conflict with the Supreme Court’s long-standing precedents against the validity of any patent claim that would pre-empt the practical use of an abstract idea, a mathematical formula or a law of nature.

Meanwhile, the legal community is eager for better guidance. The case comes after Bilski v. Kappos, the 2010 case in which the high court issued a murky ruling that said a key legal test used by the U.S. Court of Appeals for the Federal Circuit in Washington, D.C., which specializes in intellectual property and a few other specified areas of the law, was not the sole test for deciding whether a process was patent-eligible.

In a fractured majority opinion, Justice Anthony M. Kennedy said the Federal Circuit’s “machine-or-transformation test,” while useful, was not the sole test for determining patent validity of a process. Under the Federal Circuit’s test, a process is patent-eligible if it is tied to a particular machine or apparatus, or if it transforms a particular article into a different state or thing.

The Bilski decision was criticized for leaving industries and the patent community “in the wilderness,” as professor Peter S. Menell of the University of California at Berkeley’s Boalt Hall put it in a law review article this year.

“What the patent community needed was a coherent manual for navigating the boundaries of patentable subject matter,” Menell said in the June issue of the Stanford Law Review. “What it got was noncommittal, hypertextual, incoherent rambling.”

The patents at issue in the Mayo Clinic case come from efforts to help patients suffering from debilitating gastrointestinal disorders. Doctors can treat the disorders with synthetic drugs known as thiopurines, which transform inside the body into therapeutic metabolites that suppress a patient’s immune system and alleviate symptoms.

But physicians often have a hard time determining the proper dosage of such drugs because each patient metabolizes them differently. Too low of a dose will be ineffective, while too high a dose can result in severe side effects or even death.

Prometheus Laboratories licensed research from doctors at a Montreal hospital who had studied the correlations between thiopurine dosages and patient reactions. The company then received patent approval for a thiopurine metabolites test it sold to clinics and hospitals to help them determine the correct dosage of the drugs.

Mayo purchased and used Prometheus’ ProPredict test some 17,000 times from 1999 to 2004, court papers say. In 2004, however, Mayo announced that it would begin marketing its own thiopurine metabolite test based on its own experiences in treating more than 30,000 GI patients each year.

Mayo believed it had developed a more effective range of metabolite levels for treating patients. Also, it planned to provide more useful information with its test results and to offer its test cheaper.

Soon after Mayo’s announcement, Prometheus sued for patent infringement. It later amended its suit to include an infringement claim based on the research of a Mayo physician who had prescribed thiopurine to patients suffering autoimmune diseases of the skin. The doctor then collected data on metabolite levels from these patients to see whether she could set a therapeutic range for dermatological diseases.

The physician, Dr. Rokea el-Azhary, testified that she had heard of Prometheus’ metabolite levels for GI disorders but did not consider them relevant to her dermatology patients. Prometheus asserted that her work infringed the company’s patents even when paperwork she received no longer listed Prometheus’ ranges because she retained them in her memory, Mayo said in its court papers.

“Prometheus thus asserts the power to prevent doctors and researchers—who considered metabolite levels on their own years before these patent claims were filed—from exercising independent medical judgment based on ordinary blood evaluations,” Mayo says.

Prometheus said in a Supreme Court brief that the case “is not about control over doctors’ thoughts; it is about [the Mayo Clinic’s] for-profit laboratory attempting to produce and sell a multimillion-dollar competing test, the economic value of which would derive entirely from [Prometheus’] invention.”

A federal district court invalidated the relevant Prometheus patents, concluding that the correlation between thiopurine metabolite levels and therapeutic efficacy and toxicity “results from a natural body process which … was pre-existing in the patient population.”

Mayo argues in the Supreme Court that the Prometheus patent claims are invalid because they recite a natural phenomenon and culminate with an open-ended mental step, a doctor’s consideration of whether a dosage adjustment is necessary.

“The natural phenomenon at issue in this case is metabolites appearing in the blood after administration of a prescription drug,” says Stephen M. Shapiro, a partner with Mayer Brown in Chicago who represents Mayo. Doctors “should have the right to make their own medical judgments about such correlations and decide which blood readings are medically significant without paying royalties to anyone.”

Mayo is backed by the American Medical Association and other major health care associations, as well as by some technology companies and other interest groups.

“On its face, this is a ridiculous patent,” says Daniel B. Ravicher, president and executive director of the Public Patent Foundation at Benjamin N. Cardozo School of Law.

“The patenting of medical correlations, which are nothing more than expressions of laws of nature, has led to the severe restraint on the provision of medical care,” says Ravicher, who filed an amicus brief on behalf of AARP supporting Mayo.

Many pharmaceutical companies and other medical concerns side with Prometheus, seeking broad patent protection for their research and tests.

The Obama administration is in the middle. “The fact that the relevant transformation takes place within the human body does not cast doubt on the patent eligibility of [Prometheus’] claimed process,” said U.S. Solicitor General Donald B. Verrilli Jr. in an amicus brief in support of neither party.

But that is merely a threshold test, Verrilli added. The final step under Prometheus’ patents of requiring that a doctor be warned of the medical significance of the metabolite levels “is not a continuation of the process to be performed but a description of how a doctor should interpret the result.”

“Such medical knowledge may be new, and it may be valuable,” Verrilli said. But it “does not create a new ‘process’ that is entitled to separate patent protection.”