People with disabilities want the Internet to be more accessible 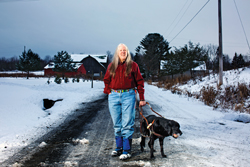 Donna Hill, who is legally blind, distributed her book online, but her reading software is unable to decipher it. Photo by Jeff Wojtaszek.

When Donna Hill self-published a book, The Heart of Applebutter Hill, in May 2013, she arranged for it to be distributed on electronic platforms, including Scribd, an online service that hosts digital books and other online documents, including court rulings.

But when the legally blind 64-year-old author tried to use Scribd, she found that the company’s site was incompatible with screen-reading software she uses that converts text into speech or sends it to a refreshable Braille display.

As a result, Hill, who has used screen-reader applications to navigate the Web since she first went online in 2005, was unable to read her book on Scribd.

“It makes me livid,” says Hill, who lives in Susquehanna County, Pennsylvania.

She says she complained to the San Francisco-based company. “They don’t give a damn about blind people,” she says. “We don’t register. And to have an accessibility issue this fundamental is proof that when you sat down to design your website, there was no thought whatsoever given to accessibility.”

In July, the National Federation of the Blind (for which Hill has done some volunteer work) sued Scribd, alleging violations of Title III of the Americans with Disabilities Act by failing to make its services available to blind users. The organization says in its complaint, filed in U.S. District Court in Vermont, that the federal Americans with Disabilities Act requires operators of “any place of public accommodation” to offer equal access to people with disabilities.

The rights group is seeking a declaratory judgment against Scribd and an injunction ordering the company to make its site and apps accessible to blind people.

Scribd’s answer, filed in late October, says the ADA only applies to “places,” and not to Web services.

The company says in its court papers that it’s working on changing its site, and is “sympathetic” to the NFB’s concerns. Still, Scribd argues, applying the ADA to websites “would sweep far beyond Scribd to the entire online industry, forcing massive expenditures of resources without the balance and clear standards that would emerge from the legislative process.”

The NFB filed its opposition to Scribd’s motion to dismiss on Dec. 29, stating that “Congress unequivocally intended that the ADA’s broad mandate for providing access to public accommodations apply to emerging technologies like those now offered by Scribd.”

Scribd isn’t the only company that’s been sued for allegedly failing to make its site accessible to disabled people. Advocates for the vision-impaired and the deaf have brought lawsuits against several large companies—including Netflix, Redbox, Target and eBay—on grounds they violated the ADA.

Meanwhile, the stakes for disabled people are increasing, as more and more services migrate online.

“This could be a new civil rights issue,” says University of Tennessee law professor Bradley Areheart. “The Internet is increasingly important every day, and it shows no signs of relenting,” says the co-author of “Integrating the Internet,” a paper slated to appear in the George Washington Law Review this year.

Areheart adds that much of the progress disabled people have made in gaining access to physical venues could be eclipsed by barriers on the Web.

The 25-year-old statute gives examples of the types of places it covers, but it doesn’t include Internet services, which barely existed when the law was passed. Instead, the ADA specifies that it applies to places like hotels, zoos, laundromats and movie theaters.

Areheart argues that the law should be interpreted to apply to “commercial websites,” which, he says, are analogous to the examples mentioned in the law.

“Few are claiming that the entire Internet needs to be publicly accessible,” he says. “That would be onerous for every individual.”

The Supreme Court hasn’t yet decided how the 1990 rights law should apply to websites, and lower court judges disagree about the answer. In the broadest interpretation of the ADA to date, U.S. District Judge Michael Ponsor of Massachusetts allowed the National Association of the Deaf to proceed with a 2012 lawsuit accusing Netflix of violating the law by failing to close-caption its video streams.

Netflix also argued that adding captions to content it didn’t own could raise copyright issues, but Ponsor said no evidence had yet been developed about those issues.

Soon after that ruling, Netflix settled the lawsuit by agreeing that it would close-caption all videos by the end of 2014.

But in two other recent cases, federal district courts in California dismissed ADA allegations against Redbox and eBay.

Judge David Carter in the Central District ruled in May that the ADA doesn’t require Redbox to close-caption its video streams.

And Judge Edward Davila in the Northern District dismissed allegations that eBay violated the ADA by failing to offer a verification mechanism that was suitable for Melissa Earll, a deaf woman who wanted to sell vintage comic books and other memorabilia on the service. She alleged that eBay required prospective sellers to verify their identities by typing in a code that’s provided over the telephone.

Earll has appealed the dismissal to the 9th U.S. Circuit Court of Appeals at San Francisco.

The judges in those matters said that 9th Circuit precedent makes clear that the ADA applies only to websites closely connected to brick-and-mortar locations, such as Target—which was sued in 2006 by the NFB for failing to make its site compatible with screen readers. After losing a motion to dismiss the lawsuit, Target agreed to settle by paying $6 million and making its site friendlier to people who access the Web via screen readers.

The U.S. Department of Justice is expected to issue more-encompassing regulations soon, which could provide guidance to courts but won’t necessarily settle the issue. The Federal Communications Commission recently issued regulations requiring captioning of streaming video, but those rules only apply to broadcasters and cable companies, and don’t apply to consumer-generated content.

In December, the FCC established the Disability Advisory Committee to address disability issues within the FCC’s jurisdiction. The committee is expected to keep the FCC apprised of current and evolving communications issues for people with disabilities.

Howard Rosenblum, CEO of the National Association of the Deaf, says the group “encourages consumers to caption their videos” that are posted to platforms like YouTube. “Consumers generally are not places of public accommodation,” he says, “but the websites that host such videos may be.”

Meanwhile, the Internet Association—a trade group made up of some of the largest Web companies, including Amazon, Facebook, Google, eBay and Yahoo—warns that applying the ADA to the Internet “may place uncertain, conflicting, burdensome and possibly ruinous obligations” on Internet companies.

“Liability would potentially flow not merely to large conglomerates, but also to small Web-only businesses or even individuals who have neither the wherewithal nor the technical skill necessary to comply,” the group wrote in an amicus brief filed with the 9th Circuit, where Earll’s appeal against eBay is pending. The organization adds that the potential for liability would be disastrous for innovation and the Internet economy.

The Internet Association adds that making sites accessible could prove expensive, noting that compliance with the DOJ’s forthcoming guidelines is expected to cost a minimum of $5,000 and possibly as much as $100,000 per site, depending on the type of content.

Daniel Goldstein, who represents the NFB, downplays those concerns. “I don’t think that most people with disabilities in this country are looking for perfection. They’re looking for an opportunity to participate.”

This article originally appeared in the February 2015 issue of the ABA Journal with this headline: “Sites for Sore Eyes: People with disabilities want the Internet to be more accessible.”