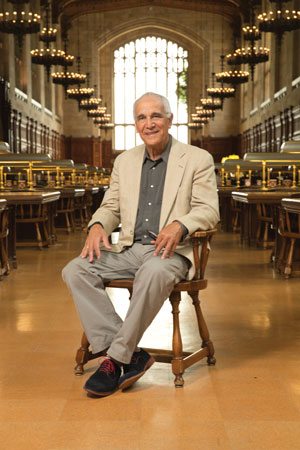 Marshall Goldberg moves between two professional worlds. As a civil rights lawyer in the 1960s and '70s, he served as counsel for the Senate Judiciary Subcommittee on Constitutional Rights and in the Justice Department's Civil Rights Division. Later, as a screenwriter, he wrote episodes of The Jeffersons, LA Law and Life Goes On, as well as feature screenplays. These days, he's both an entertainment writer and a lecturer at the University of Michigan Law School.

So when he wanted to get a message out about the state of indigent defense, he knew what to do: make a feature-length documentary.

Goldberg’s inspiration came from a talk by Yale Law School lecturer Stephen Bright, president of the Southern Center for Human Rights. Bright’s speech about the challenges faced by defendants “just floored” Goldberg, who wanted the public to understand “what it is like to be in this system trying to defend yourself when you can’t afford your own lawyer.”

With Bright’s support, Goldberg wrote a documentary script—a first for him—and is currently working with producing partner Michael Tollin to find funding. Though it’s still in its early stages, the film already has the blessing of the ABA Standing Committee on Legal Aid and Indigent Defendants.

The movie won’t attack public defenders. Rather, Goldberg wants viewers to understand that public defenders in many jurisdictions have such huge caseloads that they can’t provide thorough representation. In other places, he says, judges appoint private lawyers who are often inexperienced. And in a few jurisdictions, Goldberg says, defendants get a lawyer from companies that contract with local governments to handle a high volume of cases—as many as 2,000 per lawyer—inexpensively. He says the resulting representation is usually awful. Annually, “between 9 and 10 million people in this country are being represented by someone who is either overworked or incompetent or … is part of these mills that just want to do it as fast as possible,” Goldberg says, citing FBI statistics. “I want to make a movie that exposes that to the public.”

One goal is to show that the problem is nationwide—not just in specific areas, indigent defense systems or racial groups. To do that, Goldberg plans to go to seven jurisdictions around the United States where he already has supportive lawyers. That local support is important because the filmmakers will need judges to agree to allow cameras in their courtrooms.

Even more critically, defendants will need to waive some attorney-client privilege. That might be tougher, Goldberg says, but he believes defendants will agree when they realize he’s trying to put a human face on this problem.

“One of the things we want to do is to show that these clients, these defendants are real human beings—you know, with families and jobs, and they’re more like us than unlike us,” he says.

This article originally appeared in the August 2015 issue of the ABA Journal with this headline: “Tarnished Trumpet: A planned documentary will look at the shortcomings of the public defender system.”