Playing Against Type: New Documentary About the Foreclosure Crisis Has a Surprise Ending 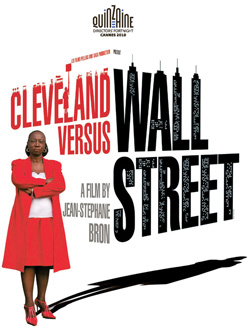 In early 2008, Swiss film director Jean-Stéphane Bron read a small news item about the U.S. housing market that gave him a big idea. Bron decided to make a documentary about the growing foreclosure crisis in the United States. Specifically, the film would focus on Cleveland, which between 2007 and 2009 experienced one of the highest foreclosure rates in the country. The dramatic heart of the film would be the story of a lawsuit filed by Cleveland Mayor Frank G. Jackson seeking to place responsibility for the crisis on 21 large investment banks.

The trial anticipated all the elements of a compelling story. There was just one problem. In May 2009, a U.S. district court judge dismissed the suit. The Cincinnati-based 6th U.S. Circuit Court of Appeals affirmed on grounds that Cleveland failed to show causation. Earlier this year, the Supreme Court declined to hear the case.

At the time of the district court’s ruling, Bron was well into filming Cleveland Versus Wall Street, so he had to quickly figure out what to do next. That’s when he decided to stage a mock trial. But neither the trial itself nor its outcome would be scripted. Real lawyers would argue the case before a retired local judge and a jury of area residents, and the witnesses would be a combination of Cleveland residents and financial experts.

“I wanted to make it intelligible, exploring the roots of this evil, which are neither technical nor financial,” Bron says. “I needed characters who were very defined.”

Bron had already started following Joshua R. Cohen, a partner at Cleveland’s Cohen Rosenthal & Kramer who was the plaintiffs lawyer in the real case. But he also needed someone to represent the banks, and there were no takers among the attorneys for the 21 defendants named in the city’s lawsuit. 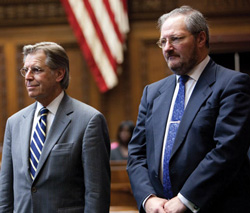 That’s where Keith R. Fisher comes in. Fisher, a financial regulatory lawyer who is of counsel at Ballard Spahr in Washington, D.C., originally served as an adviser to the filmmakers on the details of banking law. But when the direction of the movie changed, Bron asked him to argue the banking industry’s case in the mock trial. In other words, Fisher would be the film’s “heavy.”

But Fisher, whose previous film work involved helping to create a video for the ABA about the judicial branch, viewed his role differently.

“My goal in taking the role was to try to get across to the jury just how nuanced and complex the crisis was,” Fisher says. “We all know lawyers have an obligation to represent people who may be less sympathetic, and I strongly believe in that philosophy.” Besides, he says, “there’s plenty of blame to go around about what happened.”

(Fisher served as counsel of record for the ABA in 2008 and 2009 when the association filed two amicus briefs with the Supreme Court in Caperton v. Massey Coal Co. His wife, Konstantina Vagenas, is staff counsel to the ABA’s Task Force on Preservation of the Justice System.)

The trailer for “Cleveland Versus Wall Street.”

Fisher and Cohen both say they found themselves going into full trial mode, even though the proceedings being filmed by Bron were a matter of “what if” speculation and there was plenty of artistic license taken with courtroom procedures—like one-minute opening arguments and closing statements.

“It was extremely grueling,” says Cohen. “Originally, I thought this would only take weekends; but eventually, once we got into a rhythm, the competitiveness kicked in and I did my best.”

The lawyers didn’t see the results of their efforts until the film had its first showing at the 2010 Cannes Film Festival. To Fisher’s surprise, he won the case. “The French audience loved it,” he says. “One person teased me about playing the bad guy. I told him in French that even Darth Vader was a Jedi.”

The film had its U.S. premiere in April at the Cleveland International Film Festival, to mixed reviews, and is expected to go into wider release later this year.