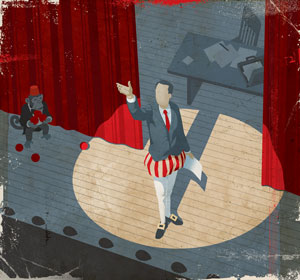 Recently I had the privilege of serving on a jury in a malpractice case. And I think I saw something you can use.

But let me be clear: I write plays or act in them—some TV and film, too. I know next to nothing about the law: zip. I’ll admit I was briefly interested in the legal profession in my early 20s and even took the LSAT, scoring a shade behind a chimp with a crayon; though in fairness, the chimp could juggle.

I’ve spent the last, wow, nearly 40 years of my life in the performing arts, the last 20 primarily as a playwright. In that time, I’ve worked on many new pieces. Workshops, readings, “showcase” productions, etc. And I’ve worked with great and horrific actors and writers (I’ve even been the latter). I’ve seen some very humble shows find their way and go on to great things. And I’ve seen some uber-talented folks crash and burn so badly that they can’t find their careers with dental records.

So why does that make me qualified to talk to you? Because if your practice involves talking to a jury, then your profession is storytelling. Just like mine. Really, that’s what it is. Boil away the cumbersome (but necessary) procedural stuff and you’re telling a story. That said, here are three rules I think might help.

Rule No. 1: Less is more. (See also: Try not to bore us.) The trial I was on was a medical-malpractice case, so there were many technical medical terms that, of necessity, we had to wade through. No way around it. But if something is superfluous or tangential—even if you find it fascinating: Move along. Keep the narrative flowing.

We the audience are trying to absorb a lot of info that you might have had months or years to get used to. Talk slowly and assume we have the attention span of a puppy in a ball pit. And pare it to the bone. I’ve seen writers and composers fall truly, madly, deeply in love with some beautiful moment of a show. You can’t pry them off of it with dynamite. And that moment, the one that is truly beautiful … destroys the rest of the show. Perhaps it’s not about the story, or it makes us follow a minor character too much, or it exhausts our emotions too soon or …? In good storytelling, anything that’s not your friend is your enemy, just like Thanksgiving with your family.

No article like this would be complete without a great quote by a wise person, so: “Murder your darlings!” Many writers have been given credit for it, but most likely it was British author Sir Arthur Quiller-Couch, aka Q. Basically it means: Take that wonderful, genius, world-changing, vivid detail you’ve come up with, and if it is a digression, delete it. Anything that slows or distracts or confuses is a problem. As a kind of Rule No. 1.2, I’d say: Don’t give us too many versions of events. It’s like trying to watch four movies at once. We might sort of get the plot, but we won’t be immersed in any of them.

Rule No. 2: Be good on your feet. The audience doesn’t lie. If, during your performance, jurors start to cough, shift in their seats, look around, mentally play Sudoku, they’re telling you something. If I’m sitting at a preview of a new show of mine and tuberculosis breaks out, I will be up that night rewriting. Don’t argue—fix it! But what if you’ve got a great plan, a killer “script”? You don’t have to rewrite on the spot, do you? Yeah, you do. The best of you can add a little improvisation. See glazed eyes? Say something funny or sad; or drop something; do something that gives us a few moments of relief before you plow on. Self-deprecation is fantastic! Make fun of your skirt or tie or car or baseball team or weight. Be human, see us check back in, and then go on: Go on with your tight, nontangential, concise narrative that draws an easy, clear line between no knowledge at all and the only possible conclusion that decent people can reach. See how I try to drop a little humor into this piece whenever I feel like it’s getting preachy? Like that.

In the realm of tight storytelling, there was one truly excellent thing that a lawyer did in our case. She presented a printed timeline for some events that happened over an hour of a mother’s labor: the baby’s heartbeat, contractions, etc., in 10-minute increments. As she did, a doctor/expert witness described what was taking place in each segment. Even though we were looking at printed sheets on a projector, it felt like we were watching a Shakespearean tragedy in HD. She moved through the hour of events in less than 10 minutes and, by the end, we were pretty much wrung out and decided. It was clean storytelling in a crushproof box.

Rule No. 3: Be a good actor, or don’t act. OK, this is a tough one and you might need some professional coaching or something to achieve it. A bad actor can be improved. A nonactor cannot. Here’s the thing: The audience is exposed to great acting all the time. If you were so good, you’d have done that.

When one of the lawyers got up to show how passionate he was about his case, but then let some fakey-fake-fake emotion choke him up, we didn’t buy it. We wanted to laugh. Now, if he had really felt that way, he should go with it and let that out; but he clearly didn’t. There are exercises you can do to get there if it’s not in you. Emotional substitution: Remember the day your dog died right before you get up to defend a toxic polluter. It can work! But really, if you’re not a good actor, don’t let your pride tell you that you are. Stay in your lane—you can still tell a good story.

Please know that I have nothing but respect and admiration for the legal profession and our system of laws in this country. While I started that case in the default reluctant mode you get when a summons arrives, by the end of it I was very proud to be an American. Proud to live in a country with courts, justice and lawyers. I hope this is useful. I wrote this because it kind of hurt me to see smart people bumbling. This is just my a priori advice. Take that, juggling chimp.

This article originally appeared in the April 2016 issue of the ABA Journal with this headline: “Unsolicited Advice: After doing jury service, a playwright offers practical advice for trial lawyers.”

Sean Grennan, a Chicago native, is a New York City-based playwright and actor. As a writer, his plays and musicals have been performed around the world, including in Canada, China, the Middle East, Russia, Spain and the U.K. As an actor, he's appeared on regional stages around the U.S. and off Broadway, as well as on TV and in film.