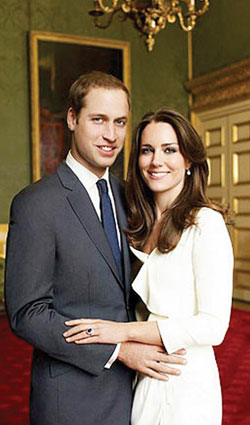 Photo of Prince William and Kate Middleton by Mario Testino © 2010

Prenuptial agreements are on the rise, U.S. lawyers say, and even Britain’s Prince William may be considering one. Queen Elizabeth’s grandson and his fiancée, Kate Middleton, plan the usual family and world-of-friends event in Westminster Abbey next month, and speculation has arisen that before the “I do’s,” the royal couple should sign “I get’s.”

Last October, the U.K.’s Supreme Court paved the way for a royal prenup by backing enforcement of a prenuptial contract for the first time. The case involved Katrin Radmacher, a German heiress who used one to shield her fortune from her ex-husband.

And according to a 2010 survey of the American Academy of Matrimonial Lawyers, 73 percent of divorce lawyers reported seeing an increase in demand for prenuptial agreements over the past five years, especially among middle-class couples.

Though topical, prenuptial agreements have been around for thousands of years, says Lyne Ranson, a Charleston, W.Va.-based family law attorney who is also co-chair of the ABA’s Committee on Marital Property.

Ranson says her experience validates the AAML survey. “We have seen data in our state that it’s true, and in the last three years have seen the number of prenups shoot up due to the economy,” she says. “People are feeling pessimistic right now and they want to be sure that everything is clear-cut.”

“People are getting more cautious with the divorce rate, and more of the baby boomers’ children at marriage age [have] had a divorce in their upbringing,” Fleischer says. “They’ve seen what happened in their parents’ divorce and may have heard their parents complaining about the arrangements in their divorce, so they want to pre-plan.”

Ranson agrees with the generational aspect of prenups. “That’s absolutely true,” she says. “Divorce rates have risen since the ’50s, so children are attuned to the possibility of divorce.”

William’s parents, Prince Charles and Lady Diana, went through a very public and rancorous divorce without benefit of premarital contracts.

But some British divorce lawyers have doubt such an agreement would make much difference should the couple separate.

There are five ways to beat a prenup, Ranson notes, including:

2) An agreement entered into involuntarily, through coercion or undue influence, or sprung upon the person at the last minute.

3) An inability to read and understand the terms or bargaining power.

4) Both parties had the same lawyer.

5) Different circumstances that at signing were not foreseeable, such as one partner winning the lottery.