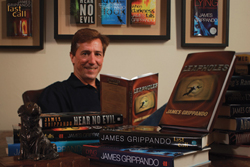 When James Grippando de­­­cided to write a children’s book, it was a drastic departure for the lawyer-turned-novelist. His crime and legal thrillers—many of which feature the exploits of fictional criminal defense attorney Jack Swyteck—have become sta­ples of the best-seller lists.

But it was just as big a departure for the publisher Grippando chose for Leapholes—his 2006 release for young readers—ABA Publishing.

There was, however, logic to the partnership. The ABA was branching out from the traditional nuts-and-bolts focus of its book-pub­lishing efforts, and Grippando offered a high-profile opportunity to continue that stretch.

Leapholes—a play on a term of legal vernacular—features a lawyer who jumps through the pages of casebooks to go back in time. Along the way, readers meet key figures in seminal cases and events, such as the Montgomery bus boycott in 1955-56 that helped launch the modern civil rights movement.

“When I first started writing Leapholes, my oldest daughter was in first grade,” Grippando says. “It was Black History Month. She asked me, ‘Was Rosa Parks a real person?’ I told her yes, and about Montgomery, Ala., in 1955. My daughter asked why can’t we go there? I thought she meant Alabama. She said, ‘I want to go to 1955 and see Rosa Parks.’ We giggled about that. Wouldn’t that be cool?”

Grippando, whose legal thrillers for grown-ups are published by HarperCollins, approached the ABA after seeing how it promoted The Shadow of Justice, a murder mystery written by prominent Miami defense attorney Milton Hirsch. Published in 2004, Hirsch’s book was the ABA’s first venture into works of fiction.

“A lot of what HarperCollins does is, you’re shooting out into the dark,” Grippando says. “The ABA has a rifle shot to people interested in the book.”

Since its publication, Leapholes has become popular with teachers, who use it in English and history classes. Now in its second printing, the book is a best-seller for the as­sociation, with more than 5,000 copies sold. (In legal publishing, a book that sells more than 2,000 copies is considered successful.)

Leapholes is just one example of how the ABA is trying to reach out to wider markets within the legal profession and, increasingly, among nonlawyers as well.

The ABA’s product catalog contains an active list of 1,000 book titles. The vast majority offer guidance on substantive topics—such as A Manual of Style for Contract Drafting and Toxic Mold Litigation—and advice on developing a law practice or achieving career satisfaction.

“The all-time classic here at the ABA is Jay Foonberg’s How to Start & Build a Law Practice,” says Bryan Kay, director of ABA Publishing. “I think we have sold more than 100,000 copies of that book over more than 20 years.”

But the 100 best-sellers listed on the Web Store page of the ABA’s website also contain a sprinkling of titles that depart from the usual ABA publishing formula. They include The ABA Legal Guide for Americans Over 50, The Little Green Book of Golf Law, The U.S. Supreme Court Coloring and Activity Book, and, yes, Leapholes.

And there’s more on the way.

John H. Minan, the author of The Little Green Book of Golf Law, for instance, is writing a follow-up, The Little White Book of Baseball Law, and has started planning The Little Red Book of Wine Law.

Minan, a law professor at the Uni­versity of San Diego whose primary focus is water law, wrote The Little Green Book with his fellow avid golfers in mind, regardless of whether they also happen to be lawyers, and he’s approaching the baseball book in the same way.

“When you look at sports-related litigation, the two most prominent are, first, baseball and, second, golf,” Minan says. “I happen to be an avid golfer and gravitated to the golf cases that would be of interest to the general public.”

In the book, Minan addresses 19 cases, including the golfer who clubbed to death a nene, an endangered species that also happens to be Hawaii’s official state bird. The nene had interfered with his shot. The question for the court was whether the golfer should forfeit the assault weapon—his Big Bertha driver—or his entire bag of clubs.

“This gave me the opportunity to talk about the law of forfeiture,” Minan says. “At the end of the case I tried to tie the case to a rule of golf, which is another unique aspect to the project. I talk about to what extent there are any anger-management rules under the rules of golf.”

Work also is under way on a follow-up to the popular Supreme Court coloring book that will focus on the lawyers who have served as U.S. presidents.

ABA Publishing also has moved into electronic delivery of its products. Its Practice Essentials program offers chapters or entire books, as well as articles from selected ABA magazines, in PDF format that may be downloaded directly by computer. In addition, ABA Book Brief Podcasts are 10- to 15-minute audio presentations of interviews, discussions and readings from ABA books.

Most of that income will go to ABA sections and divisions, which sponsor most of the books published by the association. When a section initiates a book project with editorial and tech­nical assistance from ABA Pub­lishing, any revenue goes to the section. ABA Publishing works with 24 association entities under that arrangement.

But this year, ABA Publishing will generate some $700,000 in earnings from its own projects. That money will go into the association’s general revenues. Five years ago, that amount was zero.

“The ABA is trying to expand its sources of nondues revenues,” says Paul W. Lee of Boston, who chairs the Standing Committee on Pub­lishing Oversight. “Publishing is clearly one of the prime areas where revenues can be expanded.”

Kay, who directs ABA Publishing at the staff level, says the Harvard Business School Press provides a model for what the association might accomplish.

“They’ve grown that brand into a publishing house with $110 million in revenues a year, and there’s no reason we can’t do that here,” says Kay. “We have found that the ABA is a major publisher and has the opportunity to occupy a higher realm in the universe.”

Publishing is second only to dues as a source of revenue for the Section of Litigation, says C. Timothy Corcoran III of Tampa, Fla., who co-chairs the section’s Book Publishing Board. It also is an important tool for building membership.

“We ask ourselves, what do our members want and what do our members need?” Corcoran says. “That drives what we want to publish. A related point is that we rec­ognize if we do a superb job of serving our members, the word will get around and that will be a retention and recruitment tool.”

IT’S TOUGH TO BE A CURMUDGEON

Through their publishing projects, some of the sections and other entities have helped formulate the ABA’s new publishing strategy. The Criminal Justice Section, for instance, sponsored Hirsch’s and Grippando’s books, and the Litigation Section has sponsored several books that depart from the traditional how-to formula.

One of those works is The Curmudgeon’s Guide to Practicing Law, in which a crusty senior partner at a fictional law firm dispenses always sage—but often sarcastic—advice to the firm’s junior members. The book evolved from a series of articles that ran in the section’s magazine.

Describing the Curmudgeon’s approach, author Mark Herrmann, himself a partner at Jones Day in Cleveland, says, “Where the mentor tells you in a kindly way, the Curmudgeon says, ‘Don’t do this.’ In­stead of telling you what to do, he tells you what not to do.”

The Curmudgeon’s Guide has sold some 20,000 copies since it was published in 2006—not bad for a book that Herrmann says wasn’t typical for the ABA.

“I think my book was really weird for them because they were used to having books that were big and hard to read and had a narrow audience,” says Herrmann. “And mine was lighter and had a potential to appeal to a broader audience.”

Unfortunately, Herrmann may not have another Curmudgeon book in him. “It’s dangerous to your health,” he says. “You sit in a coffee shop and think, ‘E-mails. What really pisses me off about e-mails?’ You work yourself up into a lather that is just this side of a stroke.”

Book Tells the Backstory on History’s Most Famous Trials

James Joyce’s epic novel Ulysses, which depicts the wanderings of Leopold Bloom’s mind as he made his way around Dublin on June 16, 1904, was banned in the United States even before Joyce finished writing it.

Ulysses was being published in installments by a literary magazine, The Little Review, when a New York state court ruled in 1921 that it was obscene. The book wasn’t published in its entirety until 1922. By 1923, Ulysses was—for all intents and purposes—banned in the United King­dom, Ireland and the United States.

The clandestine travels of Ulysses gave Bennett Cerf, one of the founders of Random House, an idea for how to put the book to another legal test.

In 1932, Cerf arranged to have the book seized by U.S. Customs agents from a traveler arriving from overseas. As it turned out, though, Cerf’s accomplice had to practically beg them to impound it. When the traveler insisted that an agent open his luggage, the agent replied, “It’s too hot.” When the agent finally opened a bag and saw the copy of Ulysses, he was unimpressed. “Oh, for God’s sake, everybody brings that in,” he said. “We don’t pay any attention to it.”

That’s the kind of anecdote that fills the pages of Law Makers, Law Breakers and Uncommon Trials, an eclectic account by Robert and Marilyn Aitken of 25 historic but sometimes obscure trials from the 17th century to the 1950s. Charles I of England, Wild Bill Hickok and Rosa Parks are only a few of the figures discussed in the book.

The book, produced in 2007 by ABA Publishing and the Section of Litigation, is one of the association’s latest ventures into nontraditional legal publishing. The accounts originally appeared in Litigation, the section’s quarterly magazine, says Marilyn Aitken, a freelance writer who lives with her attorney husband, Robert, in Palos Verdes Estates near Los Angeles.

“We tried to do a lot with backstories people don’t know about, instead of just giving the facts,” Aitken says. “And we tried to do the afterwards—what happened to people after the trial.”

In United States v. One Book called “Ulysses,” 5 F. Supp. 182, Judge John M. Woolsey of the U.S. District Court in Manhattan was sympathetic to the literary qualities of the work. Ruling that the book may be allowed into the United States, Woolsey noted that, while its effect on the reader “undoubtedly is somewhat emetic, nowhere does it tend to be aphrodisiac.”

Woolsey’s ruling was upheld by the 2nd U.S. Circuit Court of Appeals, and the government decided not to take the case to the U.S. Supreme Court.

The Aitkens recount that Joyce had predicted to a friend in 1931 that if the United States ever lifted its ban on Ulysses, “England will follow suit as usual a few years later. And Ireland 1,000 years hence.”

But he was overly pessimistic. By 1937, Ulysses was legally available in the U.K., and the book and its author have become such icons of Irish literature that Blooms­bury Day is celebrated every June 16 in Dublin. Meanwhile, the copy of the book used as evidence at the trial—in which the prosecutor marked with a cross every line he considered pornographic—is now at Columbia University.