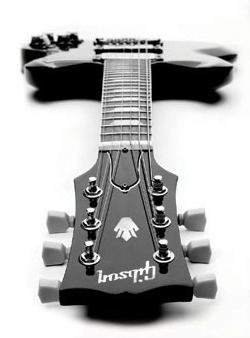 The ban, implemented late last year, aims to prevent steel guitar strings from being used as weapons (nylon strings are still allowed). It is part of a broader policy overhaul in Britain to reduce the rate of recidivism there. In the U.K., about half of all crimes are committed by people who have already been through the criminal justice system, according to the Ministry of Justice.

Government officials believe that prison life has simply become too enjoyable, thereby reducing the deterrent effect of jail. Prisoners in some U.K. jails have access to pay television in their cells, and many prisoners are allowed to wear their own street clothing.

“For too long the public has seen prisoners spending their days languishing in their cells watching TV, using illegal mobile phones to taunt their victims on Facebook, or boasting about their supposedly easy life in prisons,” said Chris Grayling, the U.K. justice secretary, in a government news release.

Along with the ban on metalstringed guitars, the government has also cracked down on other privileges, such as receiving packages from the outside world that contain certain items, such as books.

The new rules have generated a firestorm from prison reformers, who say that the measures are hampering effective rehabilitation programs that incorporate activities such as music and reading.

Several prominent musicians, including Pink Floyd’s David Gilmour and Radiohead’s Ed O’Brien, are petitioning to have the guitar ban lifted. One of the musicians, Billy Bragg, founded a program called Jail Guitar Doors that uses guitars to help rehabilitate prisoners. Taking its name from a 1978 Clash song, Bragg’s program started in 2007 in the U.K. and in 2009 in the U.S., with the help of former MC5 guitarist Wayne Kramer, whose tale of imprisonment was captured in that song.

In a letter addressed to Grayling, the group of musicians wrote: “We believe that music has an important role to play in engaging prisoners in the process of rehabilitation. However, this ability will be seriously undermined if inmates are unable to practice between group sessions. As most guitars currently owned or used by inmates in our prisons are steel-strung acoustics, this ruling will mean that these instruments are kept under lock and key until time for a supervised session, if the prison in question has provision for musical tuition.”

The musicians petitioning the government have caught the attention of lawmakers. One British M.P., Kevin Brennan, has teamed up with Bragg to try to get the guitar rule revoked. “I’d be happy to offer free guitar lessons to Chris Grayling and [prisons minister] Jeremy Wright if they’ll reconsider this policy,” Brennan wrote on his website.

This article originally appeared in the July 2014 issue of the ABA Journal with this headline: “Jail Guitar Doors: A prison ban on guitars in Britain has rock musicians outraged.”