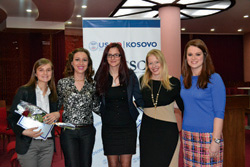 Women make up about half of all law students in Kosovo, yet constitute only a fraction of the country’s lawyers, judges and prosecutors.

Amy Beckstead and Stephanie Zosak are hoping to change that through a pro bono project designed to increase female bar membership in the Kosovo Chamber of Advocates, Kosovo’s equivalent of the American Bar Association.

In February, Beckstead and Zosak—both attorneys at DLA Piper—traveled to Kosovo as part of the firm’s New Perimeter nonprofit arm, which provides pro bono services to people in post-conflict societies.

Kosovo was one of New Perimeter’s first projects. In 2005, DLA Piper attorneys partnered with the National Center for State Courts to draft laws; among them were one that created the Kosovar court system and another creating a system of public prosecution. The center sought New Perimeter’s help again on the gender issues in Kosovo.

Beckstead and Zosak traveled around the country, from Peja to Prizren, talking with female attorneys, students and interns. They discovered a host of reasons why bar membership among women was so low in Kosovo. “There are some big structural impediments within the system” for female attorneys in Kosovo, says Beckstead, a partner in DLA Piper’s Austin, Texas, office.

For example, it costs 700 euros to join the Kosovo Chamber of Advocates, a prohibitive amount for many Kosovar women. In addition, most lawyers in Kosovo are solo practitioners, meaning new lawyers have to start their own business from scratch. That can be difficult for women juggling the responsibility of raising a family, Beckstead says.

After their listening tour throughout Kosovo, Beckstead and Zosak, an associate in DLA Piper’s Chicago office, spent a day in the capital city of Pristina, where they helped draft a three-year strategic plan that aims to increase the number of female KCA members. Recommendations included halving the 700 euro bar-membership fee, establishing a formal mentoring program for female law graduates and training members of the judiciary about gender bias.