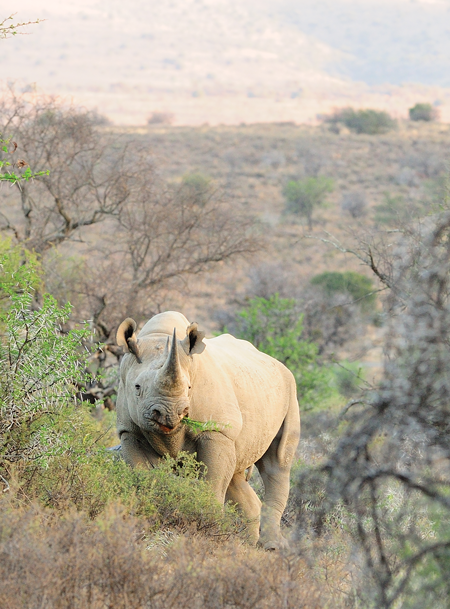 Black rhinos have a rehensile upper lip and are grayish brown. Shutterstock

Attorney Sorell Negro was shocked in 2015 to discover how few black rhinos are alive in this world. Only about 5,000 still are in existence— and 28 percent of these live in Namibia, a country on the southwest coast of Africa.

That number is staggeringly low compared to the 65,000 black rhinos estimated to have been alive in 1970. Illegal hunting wiped out about 96 percent of the population by the early 1990s.

The animals are slow to reproduce. But thanks to major conservation efforts, the black rhinoceros population was beginning to rebound. However, as Negro learned, poaching of black rhinos had increased recently.

“There are all these issues that make the rhinos very, very much at risk,” says Negro, chair of the International Committee of the ABA Section of State and Local Government Law. “I really just was heartbroken about it.”

The situation for black rhinos is far from unique. Namibia is home to elephants, cheetahs, wild dogs, an endangered type of antelope and other threatened, beloved animals—some of which are also increasingly at risk because of poaching and other threats.

Negro, an environmental and land use attorney at Robinson and Cole’s Miami office, wanted to help. She contacted the Legal Assistance Centre, a public interest law firm in Namibia, and spoke to Willem Odendaal, the firm’s land, environment and development project coordinator.

“Over the next several months, I communicated with Willem and learned more about the problems that Namibia is facing in this regard, and I discussed with him possible ways to assist LAC in addressing the poaching crisis and possible scopes of a pro bono project,” Negro says.

She proposed the project to her firm to an enthusiastic response—then she looped in lawyers from the international law firm DLA Piper. Support also came from the government law section. That’s how Jordan Lesser, legal counsel for the New York State Assembly, got on board.

Working with the Legal Assistance Centre, Negro and the rest of the team set out on a major project: to figure out how to improve the country’s wildlife laws—and strengthen their enforcement—with the aim of saving more Namibian animals.

“What do they need to do to try and address this very daunting, very complicated problem?” Negro says.

For years, Namibia has been lauded for its impressive conservation efforts. After it gained independence from South Africa in 1990, the country adopted a constitution that “is considered by many to be one of the most progressive constitutions in the world,” as attorney Stephen W. Snively said in 2012 in Probate & Property, the magazine of the ABA Section of Real Property, Trust and Estate Law.

Among its notable aspects: It’s the first constitution in Africa (and still one of few in the world) to provide for environmental protections—with a section that requires the “maintenance of ecosystems, essential ecological processes and biological diversity of Namibia and utilization of living natural resources on a sustainable basis for the benefit of the Namibians, both present and future.”

Namibia’s constitution also creates the appointed position of ombudsman, charged with some environmental protection oversight—namely, “the duty to investigate complaints concerning the overutilization of living natural resources, the irrational exploitation of nonrenewable resources, the degradation and destruction of ecosystems, and failure to protect the beauty and character of Namibia.”

The country has an extensive framework of wildlife protection laws and policies, plus international environmental obligations. Local communities have been granted broad authority to create and protect wildlife conservancies. More than 80 such conservancies exist now, encompassing an estimated one-fifth of the country’s land.

Namibia has experimented with ideas such as paying poachers to shift professions and become wildlife guardians—along with more controversial measures, such as auctioning off the right to hunt a black rhino, with the fees going toward conservation.

The black rhino and elephant populations, among others, were seen to be recovering. But the recent increases in poaching—not just of black rhinos but also of elephants and other animals—pointed to holes in this conservation framework.

Negro and her colleagues spent about half a year researching what those holes are and where improvements can be made. In September, in coordination with the Legal Assistance Centre, she and Lesser traveled to Namibia to meet with government and law enforcement officials, prosecutors and other stakeholders.

Then the two lawyers produced a detailed report, looking at how to better protect Namibia’s wildlife, as well as how to provide supplemental briefings and draft legislation. They also analyzed current legislation and worked on “understanding loopholes and problems, connecting the dots to prevent poaching,”  Lesser says.

The draft form of the report came out in January. In it, problems with the current legislative framework are identified—these include weak penalties, lack of protection for whistleblowers, poor communication and cooperation between agencies, laws that don’t allow for prosecution of poaching beyond those who do the poaching and ineffective management of the community conservancies.

The report provides many solutions. These address the particular loopholes and problems, such as increasing penalties for poaching, expanding the criminal law to include activities related to poaching, better management of conservancies, and improving agency cooperation.

Negro is particularly excited about the creation of an environmental court, which would alleviate the pressure on Namibia’s overburdened judicial system.

The court would be home to judges specially trained to handle these sorts of cases and dedicated prosecutors whose “job would be to deal with environmental crime,” she says.

The draft report and other materials have been given to stakeholders for their review. Negro and Lesser are planning a trip back to Namibia (over the summer, they hope) for workshops at which remaining concerns will be heard and incorporated into the report.

Then it will be up to Namibia’s people and lawmakers to decide how to proceed.

“Ours is really a suggestion of how you could approach making their laws stronger,” Negro says.

Odendaal says he’s optimistic that the work by Negro and her team will benefit his country’s animals and people.

“I truly hope that it will make a change to the legislative framework in Namibia,” he says. “The fact that we are working with American lawyers is great, for the simple reason that we are getting international exposure. I am impressed by their professionalism and, of course, in terms of working on comparative legal issues, it helps us in proposing the necessary law reform to our current legislative framework.”

The project is already considered to be a success by Ellen Rosenblum, chair of the government law section. Rosenblum says she would like to see more section members “providing expertise to our counterparts in Africa and elsewhere and working on projects like this that involve their local governments—particularly law enforcement.”

It’s a way to provide help on important international issues and to keep young lawyers involved with the section, by helping them pursue projects “that are meaningful to them and have a real community service aspect,” Rosenblum says.

According to Negro, the anti-poaching project has been meaningful for her from the start. But the enormousness of this venture really struck her when she was in Namibia, visiting the people who are trying to protect the wildlife. She and her fellow travelers were driving through the country’s vast wildlife reserves. There were armed guards at the entrances and exits—and often no other people in between. But there were animals. She says she never spotted any black rhinos, but she saw a lot of other animals—zebras, warthogs, giraffes and even elephants.

“It really sunk in for me how challenging it is to protect these animals in such a vast space that’s so open and rural,” Negro says—and how important, how impressive it is, that people like Odendaal and his colleagues at the Legal Assistance Centre are “devoting their lives to helping these animals exist. It’s incredible.”

Clarified second paragraph on Aug. 2 to refer to illegal hunting

This article appeared in the July 2017 issue of the ABA Journal with the headline "Protection From Poaching: American attorneys partner with Namibians to save endangered African wildlife."