Protesters may pay the price when civil disobedience becomes costly 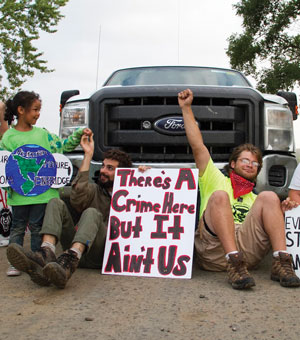 Activists Duncan Tarr (bearded) and Dylan Ochala-Gorka (in yellow) locked their necks to a truck to protest construction of a Michigan pipeline. Photo courtesy of Michigan Coalition Against Tar Sands.

Michigan State University student Duncan Tarr knew he could face criminal trespass charges when he decided to protest the construction of a pipeline that would transport crude oil known as tar sands from Canada through Michigan. Tarr and Dylan Ochala-Gorka, a carpenter, put U-locks around their necks and connected themselves to a truck to block access to the pipeline road in Oxford. The men, both organizers of a group called Michigan Coalition Against Tar Sands, were indeed arrested after firefighters were called to cut the locks during the August 2014 incident. They pleaded guilty to trespassing charges.

Then came the shocker: Tarr and Ochala-Gorka were hit with a restitution bill of $39,226 for damage done to Wisconsin-based Precision Pipeline, a contractor for Canadian energy company Enbridge. That amount is supposed to compensate Precision for the value of equipment and workers left idle during the 90-minute disruption.

Michigan has a crime victim restitution statute requiring that an individual who has been convicted of a crime make “full restitution to any victim of the defendant’s course of conduct that gives rise to the conviction.”

Tarr knew that paying restitution was a possibility. A year earlier, three other members of MCATS had locked themselves to machinery and were ordered to pay nearly $50,000. “The group thought that was a freak thing,” he says. Tarr, now a senior at Michigan State majoring in history and jazz studies, works two part-time jobs to help cover the $100-a-month payment plan he worked out. In Michigan, court-ordered restitution is not dischargeable in bankruptcy.

The case, legal experts say, illustrates the difficulty that ensues when protests go beyond free speech into the realm of civil disobedience or illegal actions. The question becomes: Who should pay when damage occurs to a targeted company or entity?

“Corporations are coming forward and saying they are like any other crime victim. Their property was damaged and they should be able to get paid, just like in any other type of crime,” says Michael Gilbert, a Dechert partner in New York City. “If somebody robs a bank, no one would quibble with the idea that the bank robber should pay it back.”

In recent years, experts say, prosecutors have increasingly relied on state criminal restitution statutes to compensate companies damaged when a political demonstration includes illegal activity. Damages can include lost revenue and the cost of increasing security.

In some cases, protesters have also been billed for the cost of police officers or emergency workers.

Some activists say that the threat of restitution has been used as a scare tactic to force defendants to accept plea bargains. Further, activists say, they are concerned that criminal restitution statutes are being used to dissuade concerned citizens from engaging in the American tradition of organized political demonstrations.

To John Royal, a Detroit lawyer who has represented protesters, the threat of a hefty restitution bill has already discouraged protesters in Michigan from voicing their opinion.

But to some legal experts, there’s a big difference between exercising the right to free expression and trespassing, destroying property or otherwise engaging in criminal activity.

“Assuming you can distinguish the guilty from the innocent—because after all, not every protester causes damage—then it is perfectly acceptable to charge guilty protesters for the damage they cause when they engage in demonstrations that destroy property,” says Roger Pilon, founder and director of the Cato Institute’s Center for Constitutional Studies in Washington, D.C.

“Your right to speak freely is not a defense to any damage you cause in the course of demonstrating and speaking,” he says. “The fact that you have a noble cause is not a get out of jail free card, nor is it a pass to absolve you of the damage you cause others.”

The concept of restitution is nothing new. Restitution laws are aimed at preventing a criminal’s unjust enrichment at the expense of the victim. By obtaining restitution for injuries, a victim is, in theory, made “whole” again. During the 1980s, victims’ rights activists pushed for more laws addressing restitution.

State laws differ in how they address criminal restitution. In some states, such as Michigan, the victim can initiate the restitution claim and specify the amount to be returned. The federal government also has a restitution law governing federal crimes.

State laws can be specific, allowing restitution in particular offenses, such as hate crimes, child abuse or identity theft. Other states have restitution statutes that are written to cover a broader range of crimes.

According to legal experts, a judge will only order restitution if the victim’s losses are causally connected to the defendant’s crime.

“Restitution should cover any damage proximately caused by the criminal activity,” says Gilbert, whose practice includes criminal restitution issues. “When it gets too extenuated, that’s typically when the court won’t order restitution.”

Along with companies, government entities can also pursue restitution claims against protesters. In California, for example, the transit system between Oakland and San Francisco sought restitution after a protest that disrupted traffic.

The case stems from a November 2014 Black Lives Matter protest in which individuals chained themselves to two trains in a West Oakland train station.

Due to the chain-in, Bay Area Rapid Transit train service was disrupted for about two hours. Fourteen members of the Black Lives Matter protest were eventually arrested and charged with the misdemeanor crime of trespassing on a railway. The protest was one of numerous demonstrations throughout the country over police violence against unarmed black men.

“Restitution is every crime victim’s right under the California Constitution,” BART General Manager Grace Crunican said in a January statement. “In other situations involving property damage or where substantial harm has been caused to the BART system, the BART Police Department has participated in the restitution process. … The West Oakland protesters created a danger to themselves and threatened the safety of those traveling throughout the system.”

But by February, the BART board of directors had asked the Alameda County district attorney to keep the charges but drop the restitution claim. The board’s 5-4 vote came after a two-hour meeting described by the Bay City News as “unruly.”

According to legal experts, companies must decide whether pursuing restitution is worth the perception that they are attempting to silence free speech.

In Bloomington, Minnesota, for example, a protest last December organized by Black Lives Matter shut down parts of the Mall of America, forcing stores within the mall to close. The demonstration occurred on Super Saturday, one of the biggest shopping days in the winter holiday season.

At least 1,500 protesters participated in the demonstration. Bloomington police and mall security repeatedly urged demonstrators to stay on public property near the mall. Protest organizers and participants were charged with misdemeanors that included public nuisance, trespassing and disorderly conduct. They’ve pleaded not guilty.

At first, the Mall of America said it would seek about $40,000 in restitution for additional security, lost revenue and other costs due to the protest.

But demonstrators vowed a large-scale boycott of the mall. And within a few months, the mall announced it would no longer seek restitution from the protesters.

Says Gilbert: “It is fair to say that companies are sensitive to being perceived as coming down too hard on protesters and are sensitive to criticism about infringing on First Amendment rights.”

Michigan state student Tarr points out that he and Ochala-Gorka were nonviolent protesters. “It seemed like traditional environmental activism, and there’s a long tradition of that sort of thing.”

This article originally appeared in the November 2015 issue of the ABA Journal with this headline: “Damaging Speech: Protesters may pay the price when civil disobedience becomes costly.”