Should the public have access to data police acquire through private companies? 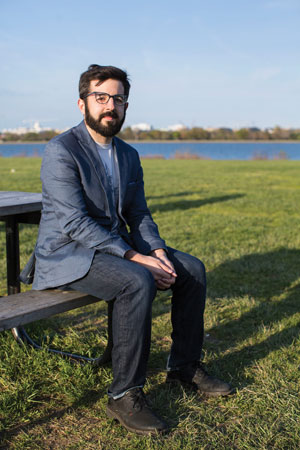 Keith Porcaro, the general counsel of Social Impact Lab, a technology consultancy nonprofit in D.C., thinks there are other ways to get private data. ABA file photo by Al Drago.

In 2013, Camden County, New Jersey, police started using the gunshot detection technology ShotSpotter. The way Dan Keashen, spokesman for the department, tells it, the tool had an immediate impact.

“The first case we ever had with ShotSpotter, we recorded what were shotgun discharges out of a backyard,” Keashen remembers. The officers went to investigate the shots and found a teenager test-firing the weapon and getting ready to head into the community. “We don’t know what he was going to do that night, but we were able to interdict anything that would have happened.”

The tool, deployed in 90 U.S. cities, is able to locate a gunshot within a 10-foot radius of its discharge and feed that information to a dispatcher or an officer in less than a minute. This matters, Keashen says, because those shotgun blasts were never called in by an individual, and the department would never have known of the incident without this technology.

ShotSpotter is, like body cameras, just one of many technologies law enforcement is adopting to capture more information with the aim of improving public safety. However, business and political interests are curtailing the public’s access to the data, which could be used to improve public safety, police accountability and citizens’ understanding of the nature of crime in their communities.

For ShotSpotter, data ownership is part of the business model. “ShotSpotter’s contracts give the firm ownership of the gunfire data by default,” explains Jennifer Doleac, an assistant professor of public policy and economics at the University of Virginia. “This means police departments cannot share the data with the public or researchers, even though taxpayer dollars are paying for those data.”

ShotSpotter CEO Ralph Clark says the data is proprietary, which is confirmed through a review by the ABA Journal of two contracts between the South Bend, Indiana, police department and the company.

“We don’t want the data to be given away so that other people could derive value from the process,” Clark says. He equates giving out the data for free through a public records request with “taking someone else’s Netflix subscription.”

This unique data set is not otherwise collected by government agencies. “The full universe of detected gunfire incidents isn’t available anywhere but in the ShotSpotter data,” Doleac says,adding that such information is valuable to researchers like herself.

Clark says the prohibition does not outright prevent sharing the data among other government agencies. However, if a department of public health, for example, wanted to use a police department’s ShotSpotter data for an initiative, it would be considered value added, and ShotSpotter would increase its fee accordingly.

While ShotSpotter allows a jurisdiction to purchase data outright, only New York City has done so, according to Clark. Separately, the District of Columbia has an open portal for its ShotSpotter data because of an older contract that provided data ownership.

The contract unambiguously states ShotSpotter’s ownership of the data; however, officials from police departments interviewed for this article did not seem to understand what they owned.

Andrew Nicklin, the director of open data at the Center for Government Excellence at Johns Hopkins University (known colloquially as GovEx), helps governments secure rights to their data. He says that when governments are contracting with third-party vendors, “contracts either explicitly ignore ownership of data or [the] vendor retains ownership.” Anecdotally, Nicklin says he sees this problem with “every government” GovEx talks with.

A root problem, according to Nicklin, is that many governments do not define what data ownership means. GovEx attempts to fix this blind spot by providing boilerplate contract language, found online at labs.centerforgov.org, that helps governments retain ownership of their data when contracting services.

Capt. Dan Skibins of the South Bend Police Department, which has spent $435,000 on ShotSpotter since 2013, acknowledges the contractual limitations. “In my opinion,” Skibins says, “if I were a resident where ShotSpotter was implemented … then I could understand why the public would want some of that information.” Skibins was unaware of any public records data requests made.

Even so, private contracts are not the only hurdle to ostensibly public data, particularly when it comes to law enforcement. Some U.S. legislatures are limiting public access to body camera footage.

Born from a national discussion about police misuse of force and the need for increased oversight, jurisdictions around the country have equipped law enforcement officers with body cameras. However, states such as Minnesota, New Hampshire and North and South Carolina have passed laws to restrict public access to police body camera footage.

Emily Shaw, a senior analyst at the Sunlight Foundation in Washington, D.C., says the laws being passed run the gamut from open and transparent to closed and opaque. “Legislatures have been playing catch-up over the last couple of years,” Shaw says. She notes that legislatures are challenged by trying to balance concerns related to people’s privacy, restrictions around ongoing investigations and the cost of redaction.

Shaw points to Washington as an example of a state with an expansive open records law that is applied to police body camera footage. However, she says that because of the complicated nature of the issue, there is every reason to expect that “where states can, they’ll try to shut down access.”

Bill Rogers, the executive director of the South Carolina Press Association, opposed the legislation. He believes that the access restriction “destroyed the whole intent of the bill, which was pubic oversight” of police agencies.

Jarrod Bruder, the executive director of the South Carolina Sheriff’s Association, lobbied on behalf of the legislation. He says that Seattle’s experience with a deluge of requests for body camera footage was enough to prompt his state to require restrictions.

When asked whether the public’s restricted access was antithetical to the goal of increased transparency, Bruder says it was not.

“The appropriate people can still get it,” he says, explaining that the law allows access to defendants and civil litigants to comply with existing constitutional standards and rules of discovery.

As these limitations to access evolve, so do approaches to circumvent them. Keith Porcaro, the general counsel of Social Impact Lab, a technology consultancy nonprofit in D.C., thinks there are other ways to get private data. (For more, see “10 Questions: Tech Support,” June.)

“Even though the data itself is still owned by these companies,” says Porcaro, “the digital interactions with these systems and the output the systems produce may be acquirable under public records laws.”

In the case of ShotSpotter, an inventive public records request could seek data adjacent to the proprietary information.

For example, ShotSpotter’s interactions with police-owned computers, such as cached notifications, depending on the jurisdiction, may fall into the realm of public access.

While Porcaro admits there are challenges to this approach, finding data with ShotSpotter’s “shadow” could allow researchers and advocates to “draw inferences of data you can’t get directly.”

This article originally appeared in the December 2016 issue of the ABA Journal with this headline: "Taking Shots: Should the public have access to data that police acquire through a private company?"