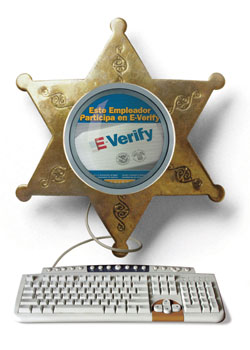 With the second-longest border to Mexico, Arizona has been at the center of the national debate over immigration policy. The state’s law enforcement officials are known for workplace raids, and earlier this year the state enacted Senate Bill 1070, a controversial law requiring the police to verify the immigration status of anyone they stop or detain whom they suspect may be in the United States illegally.

But on Dec. 8 the U.S. Supreme Court will hear arguments on another much-debated statute, the 2007 Legal Arizona Workers Act, which imposes civil sanctions on businesses employing unauthorized aliens. The measure also requires employers to participate in the federal electronic verification system for legal employment status, known as E-Verify.

The measure was signed into law by then-Gov. Janet Napolitano, a Democrat who is now U.S. Secretary of Homeland Security. “We’re dealing somewhat in uncharted territory right now—uncharted territory because of the inability of the Congress to act,” Napolitano said at the time, just after a federal immigration reform measure died in the U.S. Senate. “The states will take the lead, and Arizona will take the lead among the states.”

In U.S. Chamber of Commerce v. Whiting, a strange-bedfellows coalition of business, civil rights and immigrant organizations challenges the law as pre-empted by federal immigration laws, with President Barack Obama’s administration joining them in the high court.

“State sanctions provisions … are expressly pre-empted because of the risk that they will disrupt the careful balance that Congress struck” with federal immigration laws, says a friend-of-the-court brief filed by Acting U.S. Solicitor General Neal K. Katyal. Justice Elena Kagan is recused from the case.

“Our members were very concerned about what they saw as this patchwork of immigration law cropping up all across the country,” says Robin S. Conrad, the executive vice president of the National Chamber Litigation Center, the U.S. Chamber of Commerce’s legal arm. “It is burdensome to comply with differing immigration requirements.”

The chief federal law at issue is the 1986 Immigration Reform and Control Act, which authorizes sanctions against employers hiring such aliens. Until IRCA, federal law generally did not regulate the employment of what federal statutes refer to as “unauthorized aliens.”

The 1986 law also established the I-9 verification process, which allows job applicants to present employers with two forms of identification from an authorized list of documents. Employers may accept the documents if they appear genuine on their face, and employers have an affirmative defense if they follow the procedure in good faith.

The 1986 law pre-empted any state or local laws imposing criminal or civil sanctions “other than through licensing or similar laws,” an exception that Arizona relies upon in defending its measure. The state law broadly defines licenses as any agency permit, certificate or registration, as well as such documents as articles of incorporation or certificates of partnership.

Under the Arizona law, companies that knowingly or intentionally employ unauthorized aliens must fire such workers and file quarterly reports with the local county attorney listing their new hires. A first knowing violation may result in the suspension of a business’s license for up to 10 days. A second knowing or intentional violation requires a court to revoke all licenses, a sanction that has been dubbed the “business death penalty.”

Meanwhile, in 1996 Congress adopted a pilot electronic verification program that has evolved into E-Verify. The program is voluntary but available to all states, and the federal government requires all federal contractors to use it.

Employers submit applicants’ verification infor mation electronically through the E-Verify system, which checks against Social Security and Department of Homeland Security databases and returns a “match” if the worker has documented status.

In addition to the U.S. Chamber of Commerce, other challengers include a coalition of Arizona business groups, including those for construction contractors, restaurants, landscapers and farm employers; and civil rights groups such as Chicanos Por La Causa and Somos America.

David N. Jones, president of the Arizona Contractors Association, stresses that the construction industry recognizes a problem with illegal immigration and wants to hire only authorized workers.

“The history of the construction industry is that it is labor-intensive,” says Jones, whose group represents 280 member contracting firms. “We are similar to agriculture and tourism in that we require people. And you have a higher percentage [of employment] that is undocumented in [those] businesses.”

Both a federal district court and a panel of the 9th U.S. Circuit Court of Appeals at San Francisco upheld the Arizona law. The 9th Circuit held last year that regulating the employment of unauthorized aliens was within a state’s historic police power, and that there was a presumption against federal pre-emption without clear intent by Congress. Nor did Congress pre-empt the state law’s requirement that employers participate in E-Verify.

The Arizona measure reflects a wave of state and local action to address immigration, with more than 222 laws enacted and 131 resolutions adopted in 2009, according to the National Conference of State Legislatures. In the first half of 2010, 191 laws and 128 resolutions passed.

Arizona relies on a 1976 Supreme Court decision, De Canas v. Bica, which upheld a California law prohibiting the employment of unauthorized aliens against a pre-emption challenge. That ruling was not disturbed by the 1986 federal immigration law, the state contends. And Arizona’s sanctions on business licenses fall squarely within IRCA’s savings clause for state licensing laws, the state says.

“Even though there are federal laws in this area now, we do have state interests here,” says Mary R. O’Grady, Arizona’s solicitor general.

O’Grady rejects arguments from the law’s opponents that IRCA’s reference to licensing was meant to cover only state licenses that condition permission to engage in a business on a record of compliance with federal law, such as state farm labor contracting.

“Our definition falls within the ordinary meaning of license,” she says. “Congress didn’t limit it.”

O’Grady also responds to opponents’ arguments that the Arizona law fails to include safeguards to protect workers from employment discrimination. “Our law didn’t include an additional remedy, but all those fed eral protections are still in place,” O’Grady says.

While the case before the high court is a facial challenge to the law, the handful of enforcement actions brought since it went into effect on Jan. 1, 2008, illuminate the debate.

Three cases have been filed, all in Maricopa County—home to Phoenix and Scottsdale. In one, a Phoenix sandwich outlet, Danny’s Subway, rehired a worker in 2008 after being informed by federal agents that the employee was not authorized to work. The sandwich chain agreed to a settlement in which it closed that location on Easter and Thanksgiving Day this year.

The two other cases focus on Maricopa County Sheriff Joseph M. Arpaio, known for his tough immigration enforcement. Arpaio conducts investigations for unauthorized aliens at workplaces, citing the need to combat identity theft and other laws. A raid at a Phoenix water park turned up 10 unauthorized aliens. The Maricopa County Attorney’s Office then built a case against the employer over the repeated hiring of one such undocumented worker. The water park’s parent company settled the case last year, although the park had shut down by that time for unrelated reasons.

In the only pending case, a January 2009 raid led by Arpaio at the Scottsdale Art Factory, a furniture manufacturer and showroom, turned up an undocumented Mexican national who voluntarily returned to Mexico. The man came back, and the business allegedly sought to evade the law by hiring him as an independent contractor. County attorneys are seeking to suspend the company’s license for 10 days and impose other sanctions under the state immigration law.

Julie A. Pace, a Phoenix lawyer who represents the Scottsdale Art Factory, says the defendants deny breaking the law.

But Peter Spaw, the deputy Maricopa County attorney who is overseeing the case, says he believes the Arizona employer-sanctions law will ultimately provide a deterrent effect.

“We’re just deciding that if you knowingly or intentionally employ unauthorized aliens, then you’re not going to be able to do business in the state of Arizona,” Spaw says.