Study Shows Truths About Billing, But Do Clients Care?

A study revealing that corporate clients may not be getting the bargains they thought from law firms has drawn a deafening silence from both camps. Not only do firms charge different rates to different corporate clients for the same type of work, but the longer companies stick with a law firm, the more likely they’ll pay more than new clients. 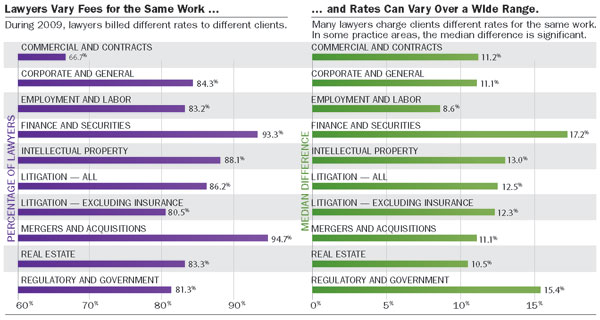 Those are just two findings from The 2010 Real Rate Report by CT TyMetrix, a provider of online law department management analysis, and the Corporate Executive Board, which offers similar analysis and advice to corporations. Their study analyzed $4.1 billion in invoices from 3,500 law firms in 50 metropolitan areas from 2007 to 2009.

“The price of major law firm partners’ time has been going up rapidly over the past 10 years,” says Steven Williams, a Corporate Executive Board managing director in Arlington, Va. Nearly one in five lawyers increased their hourly rate by $100 or more from 2007 to 2009, with associates logging the biggest percentage increases. Jumps in partners’ and associates’ rates have outpaced tuition increases at four-year private colleges, blue- and white-collar hourly wages, and producer and housing price indexes since 2000.

Lawyers’ experience has little correlation to their hourly rate, according to the data. “It was less important than two things that really surprised us—where that lawyer happened to be working and how big the lawyer’s firm happens to be,” Williams says.

A firm’s location in Chicago, Los Angeles, New York City, San Francisco or Washington, D.C., adds about $131 to a lawyer’s rate. However, metro areas in the South racked up the largest regional rate increases.

Clients also pay about $10 more for every 100 additional lawyers at a firm, says Williams, and about $100 more for a partner’s time, regardless of the partner’s experience.

One finding should give managing partners pause, according to Peter Zeughauser. “The point that your best clients should get the best deal merits consideration for all law firms,” says the chairman of the Newport Beach, Calif.-based Zeughauser Group. “Lawyers generally believe clients are less loyal today. Why? Because they can go next door and get a better deal. Law firms are reinforcing the behavior they find troublesome, and the report highlights that.’’

To others, the report proves that law departments have fallen short in rate negotiations. “Corporate clients aren’t negotiating at the micro level of individual timekeeper rates,” says Jay Shepherd, CEO at the Shepherd Law Group in Boston, which has dropped hourly billing. “Instead they negotiate discounts or caps. That’s not the same thing, and law firms will raise rates or bill more hours. They’ll make up for it.”

But Zeughauser says the report’s findings aren’t revelations. “Find me an in-house lawyer who didn’t already know this,” he says, “and I’ll bet you dollars to doughnuts his or her name is Rip Van Winkle.”