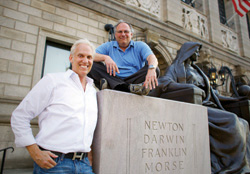 When computer science professor Larry Rudolph and entrepreneur John Ossenmacher launched the online company ReDigi in late 2011, they promised that the service would offer people something missing from the market: a legal means for consumers to sell their old digital music files.

ReDigi’s system allows people to upload old iTunes tracks and then sell them to others for between 49 cents and 79 cents—a big discount from the $1.29 often charged by iTunes. ReDigi deletes the files from sellers’ hard drives and requires anyone who sells tracks to use their proceeds to purchase files uploaded by other users. The company says it always planned to give the labels and artists a cut of any revenue.

The founders touted the service as offering people the same ability to resell digital goods that they have with CDs or vinyl records. “It’s critical that digital goods feel and act like physical goods,” says Rudolph, a professor at the Massachusetts Institute of Technology. Otherwise, he says, people will view MP3 files as worthless and be encouraged to upload files to peer-to-peer services, where others can download them for free. That, Rudolph says, amounts to piracy.

ReDigi says its service is protected by the Copyright Act’s first-sale principle, which would allow people to resell their used CDs at flea markets or online. The doctrine, originally set out by the U.S. Supreme Court in 1908, provides that copyright owners can’t prevent people who have purchased material from reselling it.

But the record industry views the service differently. The major labels contend that ReDigi makes unauthorized copies of MP3s. The industry says that even if first-sale principles let people resell what they have purchased, they can’t sell a copy of that material—regardless of whether it is a homemade recording of an album or an MP3 file.

“Leaving aside our concerns regarding whether and how ReDigi can confirm that its users actually lawfully possess the sound recording that’s being offered for sale … there can be no doubt that ReDigi’s conduct constitutes willful copyright infringement,” the Recording Industry Association of America wrote in a cease-and-desist letter sent to the company in November 2011.

In January 2012, Capitol Records—which touts artists like Coldplay, Norah Jones and Katy Perry—filed a copyright infringement lawsuit against ReDigi in federal court in the Southern District of New York.

In April, U.S. District Judge Richard J. Sullivan backed the industry, saying that ReDigi’s operation infringed Capitol’s copyright, regardless of whether the files were deleted from uploaders’ computers.

ReDigi’s lawyer, Gary Adelman of New York City, says the company intends to appeal the ruling, which he believes takes a “very narrow approach” to the issue.

“ReDigi is trying to say, ‘We want to give digital files value by letting people resell them,’ ” says Adelman. He also points out that ReDigi’s technology differs from file-sharing services, which allow the same track to be downloaded by a countless number of users, each of whom creates a new copy. Instead, ReDigi’s platform never increases the total number of copies in existence.

“There’s never more than one digital file at any place at one time,” he says. ReDigi claims that is analogous to a consumer handing off a disc to the owner of a used-record store.

But Capitol successfully argued that it is impossible to transfer digital files without copying them. Capitol, like the RIAA, says the first-sale doctrine allows only the owner of a particular copy to sell that exact item. In other words, first-sale principles make it legal to resell vinyl albums, CDs or even hard drives containing music that’s been downloaded, but not copies of files that are uploaded to the Internet.

In an attempt to figure out whether ReDigi copies or transfers files, Judge Sullivan wondered aloud whether ReDigi’s technology could be compared to the transporter on the TV show Star Trek.

He mused that merely moving the file would be akin to “Capt. Kirk going from the Enterprise to the planet through that transporter thing,” but that copying a file would be like the episode where Capt. Kirk was split into two versions—one good and one evil. Ultimately, he ruled that ReDigi’s technology makes copies.

ReDigi might be the first company to try to create a used marketplace for digital downloads in the United States, but it isn’t the only one interested in doing so.

In January, Amazon was awarded a patent for an “electronic market-place for used digital objects.” The online retailer’s application outlined a system in which users keep e-books, music files, video and software in a personalized “data store.” When people no longer want those files, they can transfer them to another user’s data store.

Apple also has applied for a patent that would allow for the transfer of digital files between users.

But some artists, writers and producers oppose the idea of enabling the resale of digital files. They argue that any technology that would let consumers sell used digital media would enable the same items to be endlessly transferred—which could devastate the market for new copies.

“The first-sale doctrine was born in the physical world, which has certain constraints,” says Paul Aiken, executive director of the Authors Guild in New York City. Aiken argues that first-sale principles have different consequences online than they do in brick-and-mortar settings.

A tangible used good “is not a perfect replacement” for the new version. Yet, he says, “a copy of a digital good is a perfect copy, and a perfect substitute for the original, so it has a different impact on the market.”

Capitol raised similar points in its arguments against ReDigi. But Adelman counters that old digital files aren’t always ideal substitutes for new ones, given the rapid pace of technological innovations. “The quality of digital files has increased dramatically over the years,” he says. Capitol’s lawyers did not return calls for comment.

Despite technology companies’ interest in enabling sales of used digital media, some copy-right experts say ReDigi will have an uphill battle. “The standard view is that whenever you’re making a new copy, you’re infringing the reproduction right,” says Joseph Gratz, an adjunct faculty member at the University of California’s Hastings College of the Law in San Francisco. “Making new copies is something that you’re not allowed to do without a license.”

At the same time, Gratz adds, the rationale behind the prohibition on copying is to enable the owner to control the total number of copies in the world. If a system like ReDigi’s deletes the user’s version as it uploads a copy to the company’s servers, the total number of copies in existence remains constant. That’s different from file-sharing services, where countless people can download the same track after one consumer has uploaded it.

He adds that even if ReDigi’s system isn’t foolproof, it’s better for copyright owners than file-sharing services, which don’t generate any revenue for the music industry because people can both distribute and download files for free without also deleting their copies. “It’s hard to see how a fairly robust technological system that tries to make sure people delete tracks—and maybe isn’t perfect in that—is a step backward,” Gratz says.

Meanwhile, some observers say the focus on total number of copies, or their condition, is headed for obsolescence. “The notion of copies as the unit of accounting is a fundamentally pre-digital concept,” says James Grimmelmann, an Internet law and intellectual property professor starting at the University of Maryland this fall.

He predicts that media could move to a “celestial jukebox” model, where consumers pay for access to digital media rather than to own it. To some extent, that’s already happening with streaming services like Hulu and Netflix. “This really seems to me a time when owning a unique digital thing is under pressure,” he says.

Instead, people might prefer to pay a fee to a service that lets them stream music, videos or books. “A blanket fee would get carved up by services and paid out to rights-holders,” he says. “They know who is consuming what, so they can cut fair shares to everybody based on what books and music and movies are popular.”