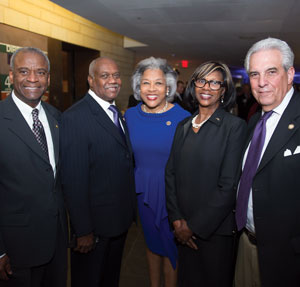 The 20th annual ABA Day in Washington, the association's major grassroots lobbying event coordinated each year by the Governmental Affairs Office, brought a record number of state and local bar leaders to the nation's capital April 19-21 to meet with members of Congress on issues of importance to the legal profession and the justice system.

For those three days, more than 360 participants—from 48 states, the District of Columbia and the U.S. Virgin Islands—occupied Capitol Hill for hundreds of meetings with elected officials and staff members that focused primarily on two priority issues: Legal Services Corp. funding and criminal justice reform.

LSC funding. The bar leaders urged members of Congress to reject any cuts to LSC funding and support President Barack Obama’s request of $475 million for the corporation in fiscal year 2017, which starts on Oct. 1, 2016. The LSC distributes federal funds to some 800 legal aid offices across the country serving the civil legal needs of low-income individuals and families in every congressional district. The $90 million increase would allow the LSC to carry out this mission more effectively.

Criminal justice reform. ABA Day lobbyists urged enactment by Congress of bipartisan, evidence-based sentencing reform that would reduce the length of mandatory minimum sentences for lower-level nonviolent drug offenders, incrementally expand the “safety valve” that permits judges to sentence below the mandatory minimum in qualified cases, and give retroactive effect to the 2010 Fair Sentencing Act.

Those efforts are crucial, said ABA President Paulette Brown of Morristown, New Jersey. “It is your local voices that have the power to make your congressional delegations stop and listen,” she told her fellow bar leaders. “We come here annually, but our message must echo in congressional offices long after we leave.”

ABA Day includes recognition of elected officials and the bar for their efforts to improve the justice system. This year, members of Congress receiving Justice Awards during a reception and dinner at the National Museum of the American Indian were Sens. Charles E. Grassley, R-Iowa, and Cory Booker, D-N.J.; and Reps. F. James Sensenbrenner, R-Wis., and Joyce Beatty, D-Ohio.

At the annual Capitol Hill reception, a Grassroots Advocacy Award was presented to Miami attorney Neal R. Sonnett, a past chair of the ABA’s Criminal Justice Section and the Section on Individual Rights and Responsibilities (now the Section of Civil Rights and Social Justice). His work has included chairing the Task Force on Treatment of Enemy Combatants and the Task Force on Domestic Surveillance in the Fight Against Terrorism, which were instrumental in developing ABA policies for protecting our security and civil liberties after the terrorist attacks on Sept. 11, 2001.

Also receiving a Grassroots Advocacy Award was the Military Spouse JD Network, which advocates for the lawyer spouses of military personnel and pushed for ABA policy that was adopted in 2012 urging jurisdictions to consider changing bar admission rules to help these spouses practice law as they are moved around the country by the military.

Keynote speakers during the opening session were Reps. Joseph P. Kennedy III, D-Mass., and David W. Jolly, R-Fla., who emphasized their support for legal services funding. Speaking at a breakfast briefing the next day, Valerie Jarrett, senior adviser to President Obama, commended the ABA for its work toward criminal justice reform. During the breakfast briefing, Brown presented a presidential citation to Wade Henderson, president of the Leadership Conference on Civil and Human Rights, who will retire this year.

This article originally appeared in the July 2016 issue of the ABA Journal with this headline: “Charging Up Capitol Hill: A record number of bar leaders participated in this year’s ABA Day lobbying event in Washington, D.C.”