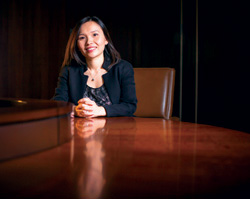 Economist Marlena Lee has researched thousands of retirement planning scenarios. She advises that “assessing needs for your spending during retirement is fundamental.” Photo by Marc Morrison.

The economy peaks and slumps, yet one question persists: How much do I need for retirement? “First, determine your expected replacement rate,” says economist Marlena Lee, vice president of Dimensional Fund Advisors in Austin, Texas. Lee has researched thousands of retirement planning scenarios to answer this question. “The replacement rate is how much of the retirement savings that you think you’ll need to use to live off of during retirement.”

Household practices and retirement preferences must be scrutinized in this process. “Assessing needs for your spending during retirement is fundamental to setting your appropriate replacement rate,” Lee says. “An individual’s target retirement age, debt, savings, Social Security benefits and health—since medical expenses increase with age—these are examples of additional factors unique to an investor that factor into spending requirements.”

“If you define successful retirement planning as we did—an investor’s ability to achieve his or her preretirement standard of living,” Lee says, “then consistent savers contributing 10 to 15 percent of their annual income have a high probability of achieving 75 to 85 percent of preretirement income for their replacement rate.”

“That’s the industry standard, but our research shows these general rules of thumb don’t work for investors who experience earnings fluctuations during their working years.” Lee’s research suggests for fluctuating income earners, such as professionals in a transitioning legal market, an equation that triggers increasing contributions when earnings increases occur has a better probability of achieving replacement targets.

“Investors who delay saving for some reason might think, ‘I can make up for that delay by taking more aggressive risk,’ adding more stocks to their portfolios because stocks perform better. But even though stocks perform better,” Lee warns, they are “taking more risk during a shorter retirement time horizon. Because there’s more risk, they end up having to save more money to meet their target replacement rates than if they stuck with properly diversifying among assets.”

Similarly, be wary of “hot” stock tips. “When someone comes to you with a hot stock tip that you have to act on right now, it’s way too late,” says Gary Bussing, retirement planning division director at the Mutual Fund Store. Instead, apply lawyerly reasoning. Analyze the inherent value of a particular company’s stock before buying or selling. Sales pitches estimating 8 percent average rates of return should be double-checked to confirm that’s the net return—as in, after adjusting for taxes, inflation and portfolio management or trading fees.

“Proper diversification is having your money in stocks in thousands of different companies across several different sectors and different countries, along with bonds and other assets,” Lee says. “Rebalancing means to adjust your portfolio’s asset exposures according to long-term asset allocation targets.”

Age and an investor’s emotional comfort with risk determine an investor’s risk tolerance. “Young investors typically have more invested in stocks,” says Lee. “This makes sense because a lot of their wealth is tied to their human capital, which is their future earning potential.

To tailor savings objectives with rebalancing purposes, you should further research Monte Carlo simulations, and the theories of modern portfolio and permanent portfolio.

And small steps offer big gains. “It’s vitally important to start early, and not necessarily at a high rate,” Lee says. “That’s because of compounding interest. Even finding 1, 2 or 3 percent of your paycheck to contribute moves investors closer to that replacement rate.”

You can estimate the 1 percent impact at AARP’s 401(k) calculator page. And if you are retiring soon? “Focus on having a cash flow stream before doing so,” says Todd Tresidder, a former hedge fund portfolio manager who retired at 35. “People concentrate on growing their money, but having an income stream that’s been adjusted for inflation so your spending isn’t absorbing your principal savings is important before you retire.”

“Retiring early means you’re talking about a longer period of time for spending than most people taking traditional retirement,” says Tresidder, who has written several books about his experience. “You can’t control inflation. If you haven’t hedged for inflation, it will eat at your principal like a cancer.”

Morningstar’s 2013 study reports a 50/50 chance of retirees successfully funding a 30-year retirement period with the historical standard of a 4 percent initial withdrawal rate. Tresidder suggests a 2.5 percent withdrawal rate would be prudent given current market valuations and interest rates.

“The market is always going up and down,” Bussing says. “Investors shouldn’t make decisions based on the morning headline. Sticking with developing an asset allocation plan for achieving your goals helps take the emotion out of investment decisions.”

This article originally appeared in the March 2014 issue of the ABA Journal with this headline: “Don’t Panic, Plan: Regular saving and asset allocation help build a retirement.” 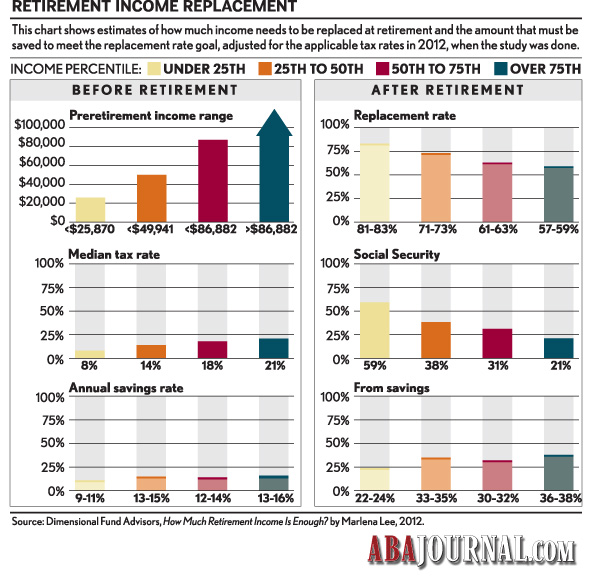 Susan A. Berson, an attorney in Leawood, Kan., is the author of several finance and tax books for lawyers. She will continue her articles on retirement next month, discussing how maintaining your health in retirement also requires planning.