Rumors of War Medals: The First Amendment May Protect Lying About Military Awards 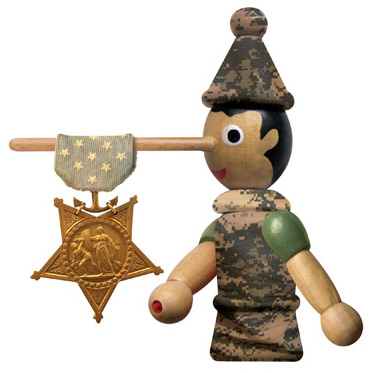 “There is much irony,” wrote U.S. District Judge Robert E. Blackburn, “that the core values of our system of governance, which our military men and women served to defend with their very lives, are here invoked to protect false claims of entitlement.” Illustration by Viktor Koen

At a 2007 meeting of a municipal California water board, member Xavier Alvarez of Pomona was asked to say a few words about himself. “I’m a retired Marine of 25 years,” he reportedly told the Three Valleys board. “I retired in the year 2001. Back in 1987, I was awarded the congressional Medal of Honor. I got wounded many times by the same guy. I’m still around.”

The last sentence was correct. The rest was nothing but “a series of bizarre lies,” said Judge Milan D. Smith Jr. of the 9th U.S. Circuit Court of Appeals at San Francisco. Alvarez was never shot in battle and never won the Medal of Honor, the nation’s highest military award. In fact, he never even was a Marine.

After the FBI listened to a recording of the district board meeting, Alvarez was indicted on two counts of violating the federal Stolen Valor Act. Signed into law in 2006 by President George W. Bush, the statute prohibits false statements about receiving “any decoration or medal authorized by Congress for the armed forces of the United States” or “service medals or badges.” Violators can receive up to a six-month jail sentence, which can be expanded to a year if the lying concerns special awards for bravery, such as the Medal of Honor, Silver Star or Purple Heart.

Alvarez pleaded guilty with the right to appeal, and in August 2010 a panel of the 9th Circuit ruled 2-1 that the law violated the First Amendment.

“The right to speak and write whatever one chooses —including, to some degree, worthless, offensive and demonstrable untruths—without cowering in fear of a powerful government is, in our view, an essential component of the protection afforded by the First Amendment,” wrote Judge Smith, adding: “The greatest damage done seems to be to the reputations of the liars themselves.”

In dissent, Judge Diarmuid O’Scannlain wrote, “This is the first court of appeals decision to consider the constitutionality of the act, but the court’s opinion is not merely unprecedented; rather, it runs counter to nearly 40 years of Supreme Court precedent.” In March, the 9th Circuit denied en banc review.

The conflict may very well get to the high court as a First Amendment battle, as more cases are prosecuted under the Stolen Valor Act, possibly opening a split among the circuits.

In January, a federal court in the Western District of Virginia ruled that the law does not violate the First Amendment. The court was considering a motion to quash a subpoena regarding Ronnie L. Robbins, 59, who was commissioner of revenue for Dickenson County, Va., from 1996 to 2010.

Robbins reportedly told an elementary school’s Veterans Day audience that he served in Vietnam. He also stated in campaign materials for his 2003 re-election that he was awarded the Vietnam Service Medal and the Vietnam Campaign Medal. Although he served in the Army from 1972 to ’75, Robbins was never sent overseas. He was convicted in March on a variety of fraud charges, including a violation of the Stolen Valor Act.

Meanwhile, the strange case of Rick Glen Strandlof is pending in the 10th U.S. Circuit Court of Appeals at Denver after a district judge in Colorado ruled last July that the act violated the First Amendment.

Strandlof created a whole military persona: graduate of the U.S. Naval Academy in Annapolis, Md.; Marine captain; survivor of the 9/11 attack on the Pentagon; wounded three-tour veteran of the Iraq war. He even invented a new name, Rick Duncan. He organized a Colorado veterans group, and in 2008 he publicly supported Barack Obama and other Democrats.

“There is much irony,” wrote U.S. District Judge Robert E. Blackburn, “that the core values of our system of governance, which our military men and women served to defend with their very lives, are here invoked to protect false claims of entitlement.”

The government is considering whether to seek Supreme Court review in U.S. v. Alvarez. “There has been no decision made by the solicitor general on whether to file a petition for certiorari,” says Michael J. Raphael, assistant U.S. attorney and chief of the criminal appeals section for the Central District of California, who argued Alvarez before the 9th Circuit.

If the high court does agree to one of the cases, a legal issue may be the interpretation of the key 1974 defamation case Gertz v. Welch. Chicago-based attorney Elmer Gertz sued after a publication falsely accused him of being a Communist. The Supreme Court wrote that “there is no constitutional value in false statements of fact.”

In Alvarez the government seized upon this passage and emphasized that the court declared other categories of false statements to be unprotected, such as perjury, fraud and defamation.

And in U.S. v. Robbins, for example, U.S. District Judge James P. Jones ruled that the law was constitutional, reasoning that false statements about military medals are not “speech that matters” within the meaning of the Supreme Court’s decision in Gertz. He said the law applied only to false statements made knowingly with the intent to deceive and banned only “outright lies,” not ideas.

But free speech advocates cite another passage from Gertz: “The First Amendment requires that we protect some falsehood in order to protect speech that matters.” These advocates contend that the Stolen Valor Act does not fit neatly into historically unprotected categories of speech—such as defamation or fraud—and that the law clearly discriminates on the basis of content and is too broadly drawn.

“I agree with the 9th circuit that the law violates the First Amendment,” says Erwin Chemerinsky, law school dean at the University of California at Irvine and a First Amendment expert. “This is a content-based restriction on speech. It does not fit into any of the categories of unprotected speech. Nor do I believe that the government has a compelling interest in punishing such speech.”

“There is no question that there is a reasonable purpose behind the law. But that can be said about all sorts of laws that are unconstitutional or unnecessary,” says Jonathan D. Libby, the deputy federal public defender for the Central District of California who represents Alvarez. “We prefer that people don’t lie, but that does not mean Congress should have the authority to legislate and criminalize those lies.

“This law fails strict scrutiny and goes beyond congressional authority,” Libby says. “The men and women who serve in our armed forces are not fighting to win medals. They fight because they are serving our country.”

Others disagree, including John D. Hutson, dean emeritus of the University of New Hampshire School of Law and the former judge advocate general for the Navy from 1997 to 2000. “The concept of limiting that kind of speech does not seem to me to rise to the level of constitutional dimensions,” he says. “In military law, there is the crime of making false official statements. If individuals make false statements about earning military medals in an official capacity, I don’t have a problem with legally prohibiting that kind of false speech.”

Eugene Volokh, a UCLA law professor who writes about free speech issues, also says the law is constitutional: “Punishing lies about your own specifically and objectively defined achievements—whether military medals, academic degrees—is extremely unlikely to deter true statements or statements of opinion. They should thus fall squarely within the First Amendment exception for knowingly false statements of fact.”

Hutson adds that the law protects those who actually won military medals. “It is not a victimless crime,” he explains. “There are at least two groups of potential victims. One group is the people who rely on those false representations, such as those voting for candidates or employers wanting to hire those people. The second group are those people who legitimately served and earned those awards. Because some lie about their military honors, everyone becomes suspect and everyone else is a little less credible.”

Yet, Chemerinsky says, “I don’t see how those who won medals are hurt by such speech. Their medals are no less valuable because someone else lies about having medals. I don’t see the compelling interest that justifies the restriction on speech.”