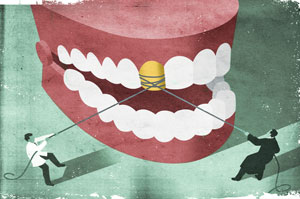 The organized bar is feeling pain from a U.S. Supreme Court ruling that a regulatory board for the dental profession in North Carolina doesn't have state-action immunity in a Federal Trade Commission antitrust action challenging the board's efforts to block nondentists from providing teeth-whitening services to consumers.

Writing for the majority in a 6-3 decision in North Carolina State Board of Dental Examiners v. Federal Trade Commission, Justice Anthony M. Kennedy stated that the dental board, which was made up primarily of practicing dentists, lacked immunity when it sent cease-and-desist letters to nondentists who performed teeth-whitening services.

In the decision issued Feb. 25, 2015, Kennedy said state-action antitrust immunity may not be invoked by a regulatory board unless the challenged restraint of trade is clearly articulated and expressed as state policy, and the policy is actively supervised by the state.

Legal experts generally agree that the case is likely to have important implications far beyond the dental profession.

“The Dental Examiners case is the most important decision in my lifetime in consumer protection law and antitrust law,” says Robert C. Fellmeth, a law professor at the University of San Diego. “It renders the conduct of more than 1,000 agencies as illegal. Virtually all state regulatory agencies controlled by the same profession being regulated or its ‘active participants’ engages in per se antitrust offenses. For example, they limit supply and decide who and how many competitors they will have.”

“The legal profession is largely self-governing,” states the preamble to the ABA Model Rules of Professional Conduct, which serve as the basis for ethics rules governing lawyers in almost every state and the District of Columbia (California’s rules follow a different format). “Although other professions also have been granted powers of self-government, the legal profession is unique in this respect because of the close relationship between the profession and the processes of government and law enforcement. This connection is manifested in the fact that ultimate authority over the legal profession is vested largely in the courts.”

The preamble asserts that self-regulation is vital to the professional independence of lawyers. “An independent legal profession is an important force in preserving government under law, for abuse of legal authority is more readily challenged by a profession whose members are not dependent on government for the right to practice.” But the preamble also acknowledges that the legal profession “has a responsibility to assure that its regulations are conceived in the public interest and not in furtherance of parochial or self-interested concerns of the bar.”

Nevertheless, the legal profession is not immune from antitrust principles. In 1975, the Supreme Court struck down minimum-fee schedules for lawyers in Goldfarb v. Virginia State Bar. In his majority opinion, then-Chief Justice Warren E. Burger explained that even a learned professional is subject to antitrust laws. “Whether state regulation is active or dormant, real or theoretical, lawyers would be able to adopt anti-competitive practices with impunity,” Burger wrote. “We cannot find support for the proposition that Congress intended any such sweeping exclusion. The nature of an occupation, standing alone, does not provide sanctuary from the Sherman Act.”

What impact State Board of Dental Examiners will have on state bar regulation “is not yet clear, and the answer will doubtless vary by state,” says Deborah L. Rhode, a professor and director of the Center on the Legal Profession at Stanford Law School. “At issue is governance occurring in three major contexts: admission, discipline and unauthorized practice of law.”

In response to the ruling, the Washington State Bar Association directed its ethics committee in December to stop issuing advisory opinions that could be interpreted as efforts to restrain trade in the legal services market. “We recognize the importance and value of the ethics advisory opinions for WSBA members,” says Debra Carnes, the bar’s chief communications officer. “That is why this is a temporary suspension, as we proceed very deliberately in the wake of the Dental Examiners decision. We are currently engaged with outside counsel on an extensive review of our work.”

And a few months after the Supreme Court issued its decision in Board of Dental Examiners, LegalZoom, an online legal services provider, filed an antitrust lawsuit in U.S. district court alleging that the North Carolina State Bar was unreasonably keeping it from offering a prepaid legal services plan in the state. The suit was later settled under a consent decree that allows LegalZoom to offer legal services using lawyers in the state if it adopts certain consumer-protection measures.

Legal experts disagree over the effect that Board of Dental Examiners will have on the longstanding regulatory structure for the legal profession.

“Disciplinary authorities typically have little to fear, because most operate under the dictates and supervision of the state supreme court,” says Keith A. Swisher, an attorney in Scottsdale, Arizona, who often represents lawyers in ethics matters. “Most ethics opinions are explicitly advisory only, although certain state supreme courts or other disciplinary authorities will more or less formally consider a lawyer’s compliance with an ethics opinion as a mitigating factor in a disciplinary proceeding.” Swisher also says that the decision addresses only state-action antitrust immunity, not the merits of any particular practice, although that could trigger costly litigation.

Fellmeth, however, sees the impact of Board of Dental Examiners as more far-reaching. “Either a state bar has to divest itself of practicing attorneys or implement active state supervision,” he says. “There is an antitrust problem for those state boards that have practicing attorneys on these boards ruling on the ability to practice of other lawyers and there is no independent active state supervision for restraint-of-trade effects.”

The question now is how bar associations should respond to Board of Dental Examiners.

“First, bar entities should ensure that they are acting in accordance with a clearly articulated state policy that serves the public interest,” Rhode says. “These entities should follow formal rules adopted by a disinterested body after notice and comment. Bar practices should also be subject to active supervision, preferably by an individual or a body other than the state supreme court.”

Some bars are re-evaluating how they enforce rules on UPL. It’s a logical response, says Swisher. “The arguably riskiest subject is UPL, as the North Carolina Dental Board case concerned enforcement of the ‘unauthorized practice of dentistry’ prohibition against tooth-whitening services,” he says. “In addition to treading carefully on potentially anti-competitive subjects, committees should not threaten disciplinary or other enforcement against those who fail to honor their opinions. Of course, most committees already refrain from such activity, but, for example, some UPL committees have been involved in sending cease-and-desist letters.”

Rhode says some regulatory functions, such as policing the unauthorized practice of law, “can be handled by local prosecutors or the state’s attorney general, who have more public accountability than state bar committees. Many bar committees routinely proceed against lay competitors without evidence of consumer injury. This should cease, and it is more likely to when disinterested decision-makers control enforcement priorities. States should also rethink the composition of governance bodies to prevent active market participants from controlling decisions. No matter how well-intentioned, such participants are likely to lack impartiality in appearance if not in fact.”

This article originally appeared in the April 2016 issue of the ABA Journal with this headline: “Does This Hurt? The Supreme Court’s ruling in an antitrust case involving the regulation of dentists has raised questions about the regulatory structure for lawyers.”