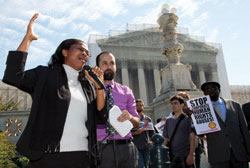 Esther Kiobel, with EarthRights International’s Brad Weikel, speaks at an October protest at the Supreme Court about her husband, Barinem, a Nigerian activist executed in 1995. AP Photo/Carolyn Kastler

The case of Kiobel v. Royal Dutch Petroleum Co., which sought to hold Dutch, British and Nigerian companies liable in U.S. courts for alleged atrocities in Nigeria, spent the better part of two years gestating at the U.S. Supreme Court.

In April, the justices issued a decision sharply limiting the scope of the Alien Tort Statute, part of the Judiciary Act of 1789 that in recent decades has been used by human rights activists to press civil actions in U.S. courts for misconduct across the globe. The ruling, with a unanimous judgment and several splintered opinions, prompted an intense debate among legal scholars and other observers that shows no signs of abating.

“It’s notable and striking that this case was argued twice and we still know almost nothing more than we did before it went to the court,” says Oona A. Hathaway, a professor of international law at Yale Law School and the director of the school’s Center for Global Legal Challenges. “It shows how tricky this area of the law is.”

The high court heard arguments twice, initially on the question of whether corporations could be held liable under the law of nations. After those arguments last term, the justices asked the parties for new briefs and arguments on whether the ATS allows causes of action for violations of the international law in the territory of another sovereign nation.

The case was filed in 2002 by Esther Kiobel and 11 other Nigerians who alleged that Shell Petroleum Development Co. of Nigeria and other companies aided and abetted atrocities by government forces against those who protested the oil firm’s environmental practices from 1992 to 1995. The plaintiffs alleged that the companies provided Nigerian forces with food, transportation and compensation, and allowed the forces to use the companies’ property as a staging ground for attacks.

The Nigerians were granted political asylum in the United States, where they sued in a putative class action under the Alien Tort Statute. A federal district court in New York allowed some claims to proceed, but the 2nd U.S. Circuit Court of Appeals at New York City dismissed the entire complaint, ruling in 2010 that the law of nations does not recognize corporate liability.

Writing for a five-justice majority, Chief Justice John G. Roberts Jr. said that the traditional presumption against extraterritorial application of a law was not rebutted by the text, history or purpose of the statute. The chief justice offered several justifications for declining to apply the Alien Tort Statute on foreign soil, including avoiding conflicts with other nations, keeping the courts from interfering with diplomacy, and avoiding encouraging other nations to “hale our citizens into their courts.”

Roberts said there was no indication the Alien Tort Statute was passed “to make the United States a uniquely hospitable forum for the enforcement of international norms.” Still, the chief justice ended with what many scholars see as an opening for enforcement of the ATS on some overseas claims by suggesting that those that “touch and concern the territory of the United States” might “displace the presumption against extraterritorial application.”

Roberts’ opinion was joined by Justices Antonin Scalia, Anthony M. Kennedy, Clarence Thomas and Samuel A. Alito Jr. Kennedy filed a concurrence suggesting that the court had left open “a number of significant questions regarding the reach and interpretation” of the statute. Also concurring in the judgment, Justice Stephen G. Breyer said he would not invoke the presumption against extraterritoriality but would find jurisdiction in the ATS where the alleged misconduct occurred on American soil, the defendant was “an American national,” or where the defendant’s conduct “substantially and adversely affects an important American national interest.”

Breyer, joined by Justices Ruth Bader Ginsburg, Sonia Sotomayor and Elena Kagan, agreed that in the Nigerians’ case, the parties and alleged conduct lacked sufficient ties to the U.S. for the statute to apply.

While conservatives and business advocates view the decision as a victory, it is a disappointment for human rights advocates.

“The big takeaway is that the conception of the Alien Tort Statute as an open-ended law that gives a remedy for actions that occur anywhere to vindicate universal values is not a plausible reading,” says Hofstra University law professor Julian Ku, who welcomed the decision. “The court has now agreed with that.”

Ku and other conservatives argue that the court’s rejection of “universal jurisdiction” of the ATS is the ruling’s most significant aspect. They suggest that the decision correctly restores to the political branches of government the right to weigh the foreign policy consequences of subjecting overseas conduct to U.S. law.

“Standing up for international law principles—that interpretation of the act is over,” Ku adds. “There must be some connection to the United States in order for a case to be brought under this statute.”

But Ku agrees with his liberal counterparts that the decision hardly means that U.S. corporations are completely off the hook.

Yale’s Hathaway is one of those human rights advocates who, while disappointed with the decision, is looking for silver linings. She says that while the decision would clearly seem to remove the Alien Tort Statute’s application to “foreign-cubed cases”—those in which a foreign plaintiff is suing a foreign defendant for conduct on foreign soil—there likely remains “significant scope” for “foreign-squared” cases in which the plaintiff or defendant is a U.S. national or the harm occurred on U.S. soil.

The decision has implications not only for the 12 Nigerians whose ATS claims were foreclosed, but also for a number of other cases involving the Alien Tort Statute.

“The real action now shifts to the district courts and appellate courts,” says Jonathan Kaufman, the legal advocacy coordinator for EarthRights International, a Washington, D.C.-based human rights organization. “Every case pending now has to do a Kiobel hearing.”

For example, Rio Tinto Group, an international mining concern with its main offices in London and Melbourne, Australia, faces several suits brought under the ATS, including one filed in California that seeks to hold the company responsible for destruction that occurred during a civil war in Papua New Guinea. The 9th Circuit at San Francisco allowed an ATS suit to proceed against the company. But after Kiobel, the Supreme Court set aside the 9th Circuit decision and ordered the lower court to reconsider the case.

In May, meanwhile, a federal district court in Alexandria, Va., heard arguments about whether to apply Kiobel to a case in which a U.S. Department of Defense contractor—CACI International Inc. of Arlington, Va.—is accused of abuse of detainees at the Abu Ghraib prison in Iraq. The plaintiffs have argued that the circumstances of their case, involving alleged conduct occurring in U.S.-occupied territory by a U.S. corporation, distinguishes it from Kiobel.

EarthRights International is behind a class action against Charlotte, N.C.-based Chiquita Brands International, alleging that the produce company funded and armed known terrorist groups in Colombia to maintain its control over that country’s banana-growing regions. In 2007, Chiquita pleaded guilty to federal charges of providing material support to a Colombian paramilitary group designated by U.S. authorities as a terrorist organization.

“This is a case in which Chiquita was actually prosecuted and pled guilty under U.S. law” for actions in Colombia, Kaufman says. “Does that ‘touch and concern the territory of the United States’?” Kaufman believes it does. The EarthRights case is before the 11th Circuit at Atlanta on Chiquita’s interlocutory appeal of several issues in the case.

Northwestern University law professor Anthony A. D’Amato, a scholar on the law of nations, says Kiobel appears to be a product of compromises among the justices. “They labored so hard; they put forth a mouse,” says D’Amato, who filed an amicus brief that was officially on neither side but supported an expansive interpretation of the Alien Tort Statute.

“It’s a very retrograde decision,” D’Amato adds. “I’m sorry the liberals on the court felt that they had to go along with it.

“As the commentators start picking the case apart, the justices will say to themselves: ‘We didn’t do such a great job and will have to try again.’ ”