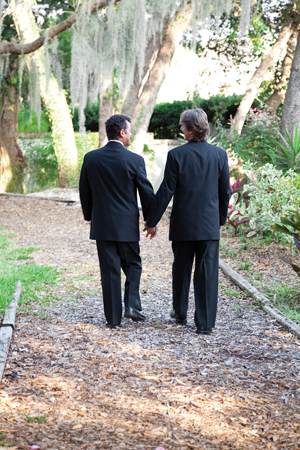 When the U.S. Supreme Court convenes April 28 to weigh issues over the constitutionality of same-sex marriage, expect the counsels' tables to be a little crowded.

The justices agreed to hear cases from Kentucky, Michigan, Ohio and Tennessee, some of which are made up of multiple plaintiffs represented by a variety of gay-rights organizations and private attorneys. Then there are the states, which have their own attorneys and solicitors general or, in one case, private lawyers presenting their cases.


"I don't know whether I've seen anything like this before, where you have so many interest groups and states involved," says Irving L. Gornstein, the director of the Supreme Court Institute at Georgetown University Law Center.

Of course, the high court itself arranged the furniture by accepting review of a decision last year by the Cincinnati-based 6th U.S. Circuit Court of Appeals. That court was the only one to uphold state bans on same-sex marriage among several federal circuits to rule on the issue since the Supreme Court's 2013 decision in United States v. Windsor, which struck down a key provision of the federal Defense of Marriage Act.

It had appeared that the justices intended to let the issue percolate. For example, at the beginning of its current term, the high court declined review of appeals of decisions by the 4th, 7th and 10th Circuits allowing same-sex marriage to begin in several more states. (As of early March, 37 states allow same-sex marriage.)

But the 6th Circuit, in an opinion by Judge Jeffrey S. Sutton, held that the lower courts were bound by the Supreme Court's 1972 summary dismissal in Baker v. Nelson of a challenge to Minnesota's refusal to issue a marriage license to a same-sex couple. Sutton went on to say that the issue should be left to the democratic process. "The question demands an answer—from elected legislators, not life-tenured judges," Sutton said.

"Given the importance of the issue—who decides important issues in our constitutional democracy—and the split among the circuits that allows the citizens of some states, but not others, to vote on the definition of marriage, Michigan does not oppose review by this court," Michigan Attorney General Bill Schuette told the court in a brief.

In its amicus filed March 4, the ABA addressed only the first question, urging the justices to rule that the 14th Amendment requires a state to license same-sex marriages.

TEED UP, 'SQUARELY IN FRONT'

Evan Wolfson, the president of Freedom to Marry, a New York City-based group that has been fighting to legalize same-sex marriage for more than 20 years, says the central issue is now teed up before the justices. The cases free the court of the questions on standing that led it effectively to dismiss the appeal in Hollingsworth v. Perry, the 2013 companion case to Windsor involving California's ban on gay marriage. The high court's resolution in Perry left a federal district court ruling intact that struck down the state ballot proposition barring gay marriage in that state.

"I think the court now has the question squarely in front of it," says Wolfson, whose group is helping with strategy but is not involved in the legal cases. "The Freedom to Marry strategy throughout this long campaign has been to build a critical mass of states and critical mass of public support to give the court the climate to rule for full marriage equality."

John C. Eastman, board chairman of the National Organization for Marriage, a Washington, D.C.-based group that defends traditional marriage and is opposed to same-sex unions, says that his side is not ready to concede defeat at the high court.

"This is not some Neanderthal anomaly," Eastman says of state bans on same-sex marriage. "Fifty million Americans have voted for these over the last decade." A decision that the 14th Amendment requires the states to recognize such unions "would be a jam-down by the court over the will of the people of mammoth proportions."

Eastman and others have taken some comfort in the court's wording of the questions, suggesting they give the justices some room to maneuver, as by requiring states to recognize unions performed in other states but not requiring that they legalize same-sex marriages everywhere.

They pin their hopes on Justice Anthony M. Kennedy, the author of the court's opinion in Windsor. While that decision eliminated the prohibition on federal recognition of same-sex marriage in the states that had legalized it, his opinion also contained strands of his long-standing concern for federalism.

They point to the jurist's language about "the historic and essential authority" of the states "to define the marital relation."

Justice Kennedy "is on record saying this is very much an area of state authority," says University of Colorado law professor Robert F. Nagel, who had filed an amicus brief in the Perry case on the side of same-sex marriage opponents.

Nagel says he holds a "counter-intuitive" view, based on an analysis of Kennedy's federalism opinions, that the justice might favor deference to state authority on same-sex marriage when there would be only a few holdout states prohibiting it. "In our present political circumstance," says Nagel, "how would Kennedy view this recent move toward same-sex marriage, which everyone agrees is powerful and fast? In fact, it is moving so fast that he may not really see the need for the court to act."

The plaintiffs are certainly not willing to put much stock in such theories. Gay-rights legal groups represent a sympathetic set of plaintiffs who are demanding the right to marry now.

The Kentucky plaintiffs include four same-sex couples who married elsewhere and are seeking state recognition of their unions because they have children and only one person in each union is legally recognized as a parent. Two other Kentucky couples have sought to marry there.

In Tennessee, three couples—made up of individuals working as doctors, soldiers and lawyers —married elsewhere and seek recognition.

In Michigan, two female nurses who are foster parents to children with special needs seek to marry and be able to jointly adopt their children. In Ohio, the plaintiffs include two men whose longtime partners died soon after the couples were wed in other states. They seek death certificates in their home state of Ohio that acknowledge the marriages. Other plaintiffs seek birth certificates for children born in Ohio.

"The other side says, 'Defer to state voters,' but same-sex couples and widows and widowers can't wait," says Susan Sommer, the director of constitutional litigation for Lambda Legal, a New York City-based gay-rights group that is representing the Ohio plaintiffs.

"Babies are being born. Spouses are dying. And people are going without dignity. It is absolutely the role of the Supreme Court to enforce the constitutional rights of individuals in a minority."

This article originally appeared in the April 2015 issue of the ABA Journal with this headline: "States of Same-Sex Marriage: High court to review a handful of cases on the rights of couples."

“States of Same-Sex Marriage,” April, page 19, should have described the breakdown of cases as follows: The Kentucky case, Bourke v. Beshear; and the Michigan case, DeBoer v. Snyder; address the first question. The second question involves the Ohio case, Obergefell v. Hodges, and the Tennessee case, Tanco v. Haslam, along with the Kentucky case.