See It Now: Past Events Seem More Real When They're Described in Present Tense 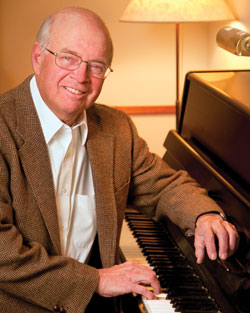 Editor’s Note: Jim McElhaney’s 25-year run as Litigation columnist for the ABA Journal will come to a close in the fall. During those years, McElhaney’s straightforward advice on trial practice became one of the most popular features in the magazine. To commemorate McElhaney’s contributions, the Journal is reprinting some of his “greatest hits” from the past quarter-century. This article originally appeared in the Journal’s October 1993 issue under the headline “It’s Happening Now.”

“It’s a gift,” said Flash Magruder. “Either you’ve got it genetically encoded or you don’t.”

“Oh, sure,” said Beth Golden. “And if you happen to have the magic gene, then you’re persuasive. Otherwise you might as well forget trying cases and go into dentistry. Is that what you’re saying?”

Angus peered over his newspaper at Flash and snorted.

“Well, it’s true,” said Flash, “which is why law schools don’t offer courses in how to persuade.”

“Wrong,” said Beth. “Virtually every law school in the country offers a course in trial advocacy, and a lot of them do a fine job teaching how to approach basic persuasion.”

“Wait a minute,” said Regis McCormick. “Just because a law school offers a course in a subject is no proof that it’s got something to teach.”

Angus smiled. “Maybe not,” he said, “but there is a lot to the subject of persuasion that the ordinary lawyer can learn without possessing any special talent. I know. I’ve done it.”

“I don’t know,” said Regis. “I heard you do the opening statement in that product liability case last week. The jury was spellbound. Anybody who could give that opening must have hung upside down and kissed the stone at Blarney Castle.”

“Thanks for the compliment,” said Angus, “but everything you heard was learned. There was nothing I did that you couldn’t do.”

“No way,” said Regis. “I could never do an opening like that.”

“Give me a chance to show you something, and I think you might change your mind,” said Angus. “First of all, I’m sure we can agree that if the facts are alive and immediate, they seem more real—more believable—than if they are something that might have happened in the distant past.”

“And that’s just what’s wrong with trying lawsuits,” said Beth. “Nothing seems very alive or immediate three or four years after the fact.”

“Which is all the more reason why the lawyer has to breathe some life back into the facts that time and legal tradition have been turning into emotional prunes and raisins,” said Angus.

Beth saw me taking notes and said, “ ‘Emotional prunes and raisins’—make sure you get that one, Jimmy.”

“I’ve got it,” I said, and everyone laughed.

“Anyway,” said Angus, “that’s the heart of a whole series of trial techniques: the lawyer’s mindset. You have got to say to yourself, ‘It’s alive. It’s real. It’s happening now.’ ”

“Just saying that to yourself will make you more persuasive?” said Flash. “Humbug.”

But everyone ignored him.

“Beth is right,” said Angus. “Here you are, three or four years after the fact, talking about something that happened to other people in another place. The easiest thing in the world is to talk about it that way.

“But there’s no rule that says you have to do that. If you say to yourself, ‘It’s alive. It’s real. It’s happening now,’ it becomes natural to talk about the facts so they have that kind of feeling. There are some things you can do that will make the facts come alive.”

Here are my notes from what Angus said.

Visualization—being able to “see” something in the mind’s eye—is a powerful persuader. It’s a process you want to nurture whenever there are key facts you must get across.

The place to start is in the opening statement. The easiest way is to invite the judge and jury to go to the scene: “I want you to come with me to Erie, Pa. You are going to visit the Federal Motors Axle Factory on the shore of Lake Erie—the oldest axle factory in the United States. You are going to see them manufacture the key part of the automobile—a defective rear axle—that killed Sandra Wilson.”

It will help to have pictures and diagrams, of course. But you don’t need to overdo it. Mental pictures are memorable, too.

Inviting the judge and jury to come along is not the only way to do it. You can, if you wish, just put them there: “Ladies and gentlemen, you are standing on the corner of Ninth and Euclid in Cleveland, Ohio. You are about to see a city bus run down a little girl who has gotten away from her mother while they are crossing the street.”

One of the advantages of this method is that you can put them anywhere you want: “This morning you are going to be a fly on the wall in a room where a secret meeting is going on. You are at an innocent-looking restaurant in Waycross, Ga., watching three men who are eating breakfast agree to be hired to murder a young mother and her two children.”

Details are the difference between vague generalizations and compelling pictures that demand the right verdict—that is, the verdict you want.

But be careful. Most lawyers drown judges and juries in meaningless trivia. We seem to figure that if two details are good, then 100 must be better.

Never start any part of a trial with a series of unconnected facts. Judges and juries simply won’t remember them. Instead, weave in the details as they become important. It is appalling to see a lawyer start or finish his case-in-chief by reading a series of unrelated stipulations. It virtually guarantees that even the most important information in them will be lost.

But the right detail at the right moment can have a poignancy that will make an indelible memory—like 8-year-old Mark. He put on his new Disneyland T-shirt so he could show it to his friend Nick, who lived just three blocks away. Only Mark never got to Nick’s house because the bread truck ran the red light at the corner where Mark’s street crosses Capitol Drive.

Which details, how many and where to put them is what makes this part of advocacy an art. Too many, and you will turn the whole trial into a maudlin tear-jerker. Too few, and it all seems distant and abstract.

THE PAST IS PRESENT

For the most part, we talk about what has happened and what is going to happen.

We usually save the present tense for describing what is actually going on as we speak. The plumber has returned your call, and you say, “Am I glad to hear from you. I’m in the basement right now, and I’m standing in 2 feet of water. How quickly can you get over here?”

But there are times when you want to convey that sense of “it’s happening now” to events that happened in the past.

Say you are in the middle of an opening statement in a product liability case. You want the jury to understand that the manufacturer of an automobile axle made a deliberate decision:

“When the axle for the Wilsons’ car came out of the heat-treating machine, it was time to test it. And they did. Federal Motors tested the Wilsons’ axle with an ultrasound machine. It tells whether there are any internal weaknesses that you can’t see with the naked eye.

“And you know what happened? The Wilsons’ axle didn’t pass the test. It failed. It flunked. It had internal weaknesses that made it a bad axle—an unsafe axle.

“So now Federal Motors has a choice. What to do with the bad axle? It would cost $21.37 to melt it down and start over again. But it would only cost $3.06 to send it through the axle cooker a second time.

“They decide to put it through the axle cooker again. It saves them $18.31. But when it comes out of the cooker a second time, they don’t bother to test it again. Why not? Because they know this time it’s good?

“No. It’s because the ultrasound test doesn’t work on an axle that has been heat-treated twice. It won’t show whether it’s good or bad. The test just doesn’t show anything on an axle that’s been through the cooker twice.

“So what do they know about the Wilsons’ axle? That it flunked the test the first time, that they cooked it a second time—which might or might not have fixed it—and they have no idea whether it’s any good or not.

“And what do they do with this axle that flunked the only test it ever got? They send it to their plant in Milwaukee, where they put it in the Wilsons’ new car.”

“You can even use present tense on direct and cross-examination,” said Angus. That’s when Flash Magruder interrupted again.

“That’s ridiculous,” said Flash. “I can see it on cross-exam because you’re doing the talking. But how do you get somebody else to use the present tense unless you tell them to do it?”

Just then Mike Pirelli came in, and Angus said, “Nobody say anything to Mike about this. I want you to see how it works.”

“Hey, Mike,” said Angus. “Do you mind if I ask you a couple of questions about that fender-bender you had last week? I want to do a little experiment.”

“Where did it happen?” said Angus.

“Which way were you going?”

“What time of day was it?” said Angus.

“OK,” said Angus. “You’re approaching the intersection of Third and Locust. It’s between 3 and 3:15 in the afternoon. Can you see the other car?”

“What is it doing?” said Angus.

“It’s backing out of a driveway,” said Mike.

“What does the other car do?” said Angus.

“He turns and starts backing down the sidewalk real fast, and all the pedestrians start jumping out of his way,” said Mike.

“I hit my brakes, but this wild man keeps backing his car over the curb and into my right front door.”

Beth said, “I wouldn’t have believed it if I hadn’t seen it.”

Flash said nothing at all.