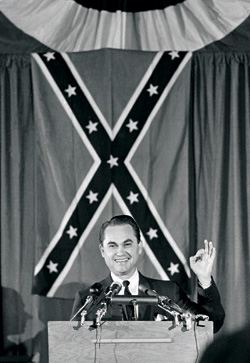 Photo of Gov. George Wallace by the Associated Press.

Anthony and Henry Lee were no different than thousands of other black Southern teenagers caught in the intense battle over the implementation of Brown v. Board of Education. But their names would go down in history.

On Sept. 2, the day classes were scheduled to start for the fall term, Wallace issued an executive order shutting the school for a week and instructed the state police to enforce his decree.

Within days, Judge Johnson and four other federal trial judges in Alabama jointly issued a restraining order instructing the governor to stop interfering with the court-ordered desegregation of public schools in Birmingham, Mobile and Tuskegee. When Wallace ordered the Alabama National Guard to stop any nonwhite children from entering all-white schools, President John F. Kennedy federalized the guard and had them return to their armories.

But the governor wasn’t through, and he declared the state would reimburse parents if they sent their children to a new all-white private school or an all-white public school in a neighboring district. When Tuskegee High’s doors opened Sept. 9, the only students attending were the black children. Wallace then ordered the school closed, leaving the traditionally all-black Tuskegee Institute High School as the only option for students of color.

Judge Johnson had the final word. He and two other federal judges jointly ordered the state to bus the black students to the all-white public schools and enjoined the state from offering any payments to white parents who sent their kids to the private school. He also ruled that Wallace’s actions starting on Sept. 2 were evidence that state officials controlled public education, not local leaders. That finding allowed Johnson to issue a statewide permanent desegregation order as part of Lee.

Interview with Fred Gray: Rosa Parks’ attorney: ‘If the story would be told, I’d have to tell it’