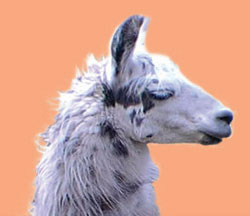 One of nine llamas in Robert Seibel’s care.

It’s hard to live in idyllic Ithaca, N.Y., home to scenic rolling hills, organic farms and freethinking academics, without catching the do-gooder bug. So found Robert Seibel, who along with his wife, Kathleen, began purchasing llamas in the early 1990s and raising them on 3 acres outside their home in Ithaca. Soon their herd had grown to 12 animals, mostly adoptees.

“A lot of people knew we had llamas,” Seibel says. “We would get an occasional call when somebody had a llama that needed a new home.”

Fast-forward to 2005, when Seibel began teaching at California Western School of Law, along the way taking in three local llamas. When the Seibels decided to stay, they relocated their remaining Finger Lakes llamas, by way of a “llama limo,” to El Cajon in suburban San Diego. Today they have nine llamas—three females and six neutered males—along with several rescued dogs and cats. Lewis, the senior member of the llama herd, was taken in when his owner had to go to a nursing home.

“He’s actually gotten much better,” says Seibel, noting the animals are social and thrive on interaction. “He’s been eating well and gained weight.”