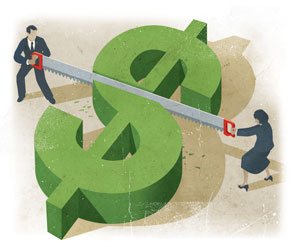 One of the many stories about Huey P. Long—the legendary "Kingfish" who reigned over Louisiana politics during the 1920s and '30s—goes like this: When the future governor and U.S. senator sat for his oral bar exam in 1915, he faced questioning from noted admiralty lawyer George Terriberry, who asked him at one point what he knew about admiralty and maritime law. "Nothing at all," answered Long.

That candid response led Terriberry to ask a trenchant follow-up question: “Well, what would you do if you had an admiralty case?” Long just as craftily responded: “I’d associate Mr. Terriberry with me and divide the fee with him.”

Whether that story is true or just another tall tale about one of the most fascinating characters in American history, it does help to show that dividing fees when one lawyer refers a case to another lawyer outside the firm is a long-standing and common practice, especially when it’s necessary to bring in a trial lawyer to handle a litigation matter involving a contingency fee.

But the division of fees is subject to certain limitations, which are generally set forth in Rule 1.5(e) of the ABA Model Rules of Professional Conduct. (The Model Rules are the primary basis for binding ethics rules in every state, with some variations, although California sets forth its rules using a different format from the Model Rules.)

Under Model Rule 1.5(e), lawyers who are not in the same firm may divide a fee only if (1) the division is in proportion to the services performed by each lawyer or each lawyer assumes joint responsibility for the representation; (2) the client agrees to the arrangement, including the share each lawyer will receive, and the agreement is confirmed in writing; and (3) the total fee is reasonable. A referral fee arrangement also subjects both lawyers to the conflict provisions in Model Rule 1.7.

The application of the rules on division of fees is discussed in detail in ABA Formal Opinion 474 (PDF), which was issued April 21 by the Standing Committee on Ethics and Professional Responsibility.

Opinion 474 also emphasizes that “because the client is represented by both the referring lawyer and the lawyer to whom the client was referred, a referral fee arrangement under Model Rule 1.5(e) subjects both lawyers to the conflict provisions of Rule 1.7.”

The exceptions are set forth in Rule 1.7(b), which allows a lawyer to represent a client even when there is a concurrent conflict of interest if (1) the lawyer reasonably believes that he or she will be able to provide competent and diligent representation to each affected client; (2) the representation is not prohibited by law; (3) the representation does not involve assertion of a claim by one client against another client represented by the lawyer in the same litigation; and (4) each affected client gives informed consent, confirmed in writing.

“To divide a fee with another lawyer, the referring lawyer must either work on the case or assume joint responsibility, which typically means either ethical or financial responsibility, or both,” says Keith Swisher, a legal ethics consultant in Phoenix. “Thus, the referring lawyer is effectively representing the client one way or the other. In light of this fact, the opinion was correct to apply the conflict-of-interest rules to the referring lawyer. In other words, if the lawyer has an unwaived or unwaivable conflict, the lawyer should not be permitted to work on the case or assume responsibility—and therefore should not be permitted to receive a fee.”

The opinion’s larger implication, Ciolino says, “is that a fee-sharing lawyer has all of the professional responsibilities attendant to full-blown legal representation, including the duties of loyalty, confidentiality, competence and diligence, among others.”

The opinion explains that the total fee must be reasonable, approved by the client and confirmed in writing. “The agreement must describe in sufficient detail the division of the fee between the lawyers, including the share each lawyer will receive,” the opinion states. The agreement “should not be entered into toward the end” of the attorney-client relationship. “Instead, the division of fees must be agreed to either before or within a reasonable time after commencing the representation.”

That early timing requirement is not followed uniformly by all the states, says Swisher. “Certain jurisdictions, most notably California, permit the lawyers to set the division at the end of the representation—so long as the client is notified before, even if just barely before, the fees are actually divided among the lawyers. Because the opinion’s interpretation provides earlier notice to clients, because it effectively forces the lawyers to better plan out the division of responsibilities ahead of time, and because the interpretation is seemingly implicit in the rule’s wording, the interpretation is sound—although not every lawyer will welcome it.”

Actually, as Opinion 474 points out in a footnote, there is a significant amount of variation in state ethics rules governing division of fees. Colorado, for instance, prohibits referral fees outright, while a few others have not incorporated ABA Model Rule 1.5(e) into their ethics codes. Some states, such as California, only require client consent and a total reasonable fee and do not require joint responsibility. Other states require that there always be some form of joint responsibility.

“Referral fees are a fact of life, and I believe that those states that prohibit them are engaged in a futile mission,” says Peter A. Joy, a professor at Washington University School of Law in St. Louis who teaches legal ethics. ”The ABA Model Rule approach recognizes that referral fees are here to stay, and the Model Rule requires the fee sharing to be based on either a proportion of the work performed or by sharing joint responsibility for the matter. The ABA approach is a reasonable one, but states such as California, which only require client consent and a reasonable total fee, better reflect the reality of law practice.”

This article originally appeared in the July 2016 issue of the ABA Journal with this headline: “Division Adds Up: Sharing fees with a lawyer outside the firm passes ethics muster as long as certain rules are followed.”