She-roes: Women Strive to Promote Their Own in Silicon Valley IP Law 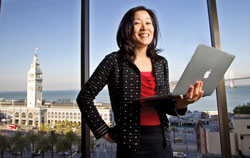 Never underestimate the power of visible trailblazers. They were sorely lacking when Anirma Gupta began as a patent attorney in 1993.

“The firm I worked at had no intellectual property partners in the electrical/mechanical field,” says the deputy general counsel for litigation and IP at Intuit in Mountain View, Calif. “I had no female role models.”

Ditto for Michelle Lee, Google’s deputy general counsel for patents, also in Mountain View. “When I was going through the ranks, there wasn’t a plethora of women.”

Does that matter? It did to Mallun Yen, who only became confident she could step into the demanding role of being head of IP at Cisco Systems after seeing another female lawyer successfully manage her intense career and personal life.

“I told the general counsel, ‘I can’t fly to China on two hours’ notice; I need some balance in my life,’ ” recalls Yen, now executive vice president at RPX Corp., a patent risk-management firm in San Francisco. “He said that was OK and pointed to a woman who’d worked for him for a long time and said, ‘See, she’s been able to do it.’ I saw that you can have a family life and a successful career. That meant a lot to me.”

They’re also Chipsters, seven female IP chief counsel (Get it? CHief counsel of IP) who coalesced as a group in 2005 when they realized they’d continue to be a rare breed unless they did something about it.

“We wanted to show that here’s a group of women, many of whom have children, and some how you can make it work,” Lee says.

It was Yen and Julie Mar-Spinola, vice president for legal at Alta Devices, who first connected and planted the seeds that grew into the Chipsters.

“We understood we were in a relatively unique position and decided we should take advantage of that to help others,” explains Yen. IP has traditionally been more heavily male than female. “We thought maybe we could use our experiences to help mentor other women and encourage them not to leave IP.”

What makes the Chipsters different from other networking and support groups? “For the seven of us, it’s never been about business development or trying to promote ourselves,” says Yen. “We truly did this because we wanted to.”

Group members organize three or four combined informational and networking sessions annually. They’ve hosted a panel of five female general counsel of public companies and a panel of female judges. “The idea is to provide a forum for women to network, to potentially find mentors, and to learn from the experiences of others,” Gupta says.

Events have been of interest to men, too. “The group arose out of the dearth of women in that IP space,” adds Lee. “But it so happens men have attended our events and benefited greatly.”

Board members don’t have concrete goals for the Chipsters and don’t track their success. But they’re comfortable with that.

“I’d be tremendously satisfied if we saw more women stay in the profession and reach the levels they’re interested in reaching,” Lee says. “If something we’ve done has helped them, we might not even be able to measure it and I may not know about it, but I’d be satisfied.”