Shell Gets a Pass on Nigerian Claims, But Tort Law’s Future Still Unclear 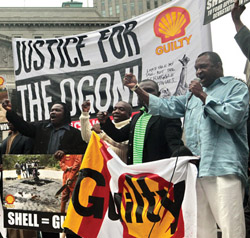 Federal appeals Judge Pierre N. Leval recognizes the perquisites that befall businesses when they incorporate—not the least of which is confining liability to the organization to protect shareholders’ personal assets.

But as a member of the 2nd U.S. Circuit Court of Appeals, Leval was downright ticked in September when his colleagues, in his view, rolled out a new set of corporate rights. In a split decision, the majority closed the federal courts to plaintiffs seeking redress for human rights abuses they say companies sometimes inflict when they set up shop in the developing world.

“The new rule offers to unscrupulous businesses advantages of incorporation never before dreamed of,” Leval wrote Sept. 17, agreeing only in the judgment dismissing the plaintiffs’ case in Kiobel v. Royal Dutch Petroleum Co.

The other two panel members on the Manhattan-based court staked out new judicial ground when they became the first to hold that the 1789 Alien Tort Statute does not extend federal jurisdiction to the Nigerian plaintiffs’ abuse claims against the oil company.

“So long as they incorporate … businesses will now be free to trade in or exploit slaves, employ mercenary armies to do dirty work for despots, perform genocides or operate torture prisons for a despot’s political opponents, or engage in piracy—all without civil liability to victims,” wrote Leval, who still would have dismissed the class action because the allegations weren’t pleaded specifically enough.

Corporate defendants, though, barely had time to pronounce the tort statute dead before the next round opened with requests for the circuit court to rehear the case en banc. At the same time, cases from other courts continue to flow through the system, with plaintiffs hoping for a circuit split that would prompt the U.S. Supreme Court to take a look at corporate liability under the law.

“Obviously, if this ruling stands, it’s going to clear the field of cases under the ATS,” says Washington, D.C., lawyer Jonathan C. Drimmer, a partner at Steptoe & Johnson who advises corporations on compliance matters.

But, says Washington plaintiffs lawyer Terrence P. Collingsworth, “I just think everyone’s getting way too excited about this. I’m not nearly as nervous as everybody else.” Collingsworth, managing partner of the D.C. office of Conrad & Scherer, represents plaintiffs in two cases deemed potential cert contenders.

The case against Shell developed in the early 1990s in Ogoniland, an ethnically distinct enclave in southeast Nigeria’s Niger Delta. Population estimates range from 500,000 to as many as 1.5 million people occupying about 400 square miles. Shell arrived in Nigeria in 1958, and by 1990 the Ogonis had begun demanding a greater share of the government’s oil revenue and ownership of the oil beneath their land.

The confrontation with Shell reached a liberty-or-death moment in 1995 when Ogoni activist and writer Ken Saro-Wiwa and eight others were hanged amid worldwide protests after they were accused of involvement in the mob beating deaths of four Ogoni chiefs. Shell actually had pulled out of Ogoniland in 1993 after one of its employees was beaten as protests against the company turned increasingly violent.

Shell still operates offshore and on land in the rest of Nigeria, and accounts for more than 20 percent of the nation’s oil and natural gas production. The company reports that from 2005 to ’09 it contributed $36 billion in revenues to the Nigerian government. A Houston-based Shell spokesman says the company has no comment on the 2nd Circuit decision, except to say it’s pleased with the outcome. Perhaps as a sign of confidence, Shell hinted that it might return to Ogoniland and the 112 wells it abandoned there as its case headed for the appeals court.

The first case was filed in 1996 by survivors of the hanged activists, accusing Shell of complicity with the military government in torturing and summarily executing the activists. Without admitting liability, Shell settled those individual claims for $15.5 million on the eve of trial in 2009.

But as a class action, the related Kiobel case, filed in 2002, probably worries corporate defendants more. Corporate liability on that scale could translate to bankruptcy. Lead plaintiff Esther Kiobel’s husband, Barinem, was executed at the same time as Saro-Wiwa.

The Kiobel plaintiffs accuse Shell of aiding and abetting the Nigerian government in trying to quell the Ogoni protests by transporting troops, allowing them to use company property as staging areas for attacks, and feeding and paying the soldiers.

The 2nd Circuit majority, Chief Judge Dennis Jacobs and Judge Jose A. Cabranes, first concluded that international law governs the case and historically holds no place for civil liability against corporations. Consequently, plaintiffs can’t use the tort statute against them.

The closest the majority came to finding precedent for international corporate liability arose in the case of the partnership between Nazi Germany and the chemical company I.G. Farben. The company built a complex at the Auschwitz death camp drawing on prisoner labor to produce synthetic oil and rubber. The Nuremberg tribunals, established to try accused war criminals, had the power to label certain organizations as criminal.

But when it came time to deal with Farben, the Allies only pursued charges against two dozen company executives, 10 of whom were acquitted, with the others receiving prison terms from 18 months to eight years. Though the tribunal could have gone after the corporation too, members suggested the exercise would be pointless because the company only could act through the individuals charged.

But the majority’s reliance on criminal cases and an assertion that international law doesn’t distinguish between criminal and civil liability bothered Leval. As he sees it, international law leaves it up to each nation to determine whether to pursue criminal or civil actions.

The 2nd Circuit decision also perplexed the lawyers because the question of corporate liability that determined the outcome was neither briefed nor argued before the panel, though it had been in another alien tort case argued the same day. The Supreme Court on Oct. 4 declined the second case, Presbyterian Church of Sudan v. Talisman Energy Inc., after the plaintiffs asked for cert on different issues.

“They issued this without a single brief or a single word from either party,” says lead Kiobel plaintiffs lawyer Paul L. Hoffman of Schonbrun DeSimone Seplow Harris & Hoffman in Venice, Calif., also the lead lawyer on the Talisman case. “I’ve never seen that in 30 years.”

Hoffman also argued Sosa v. Alvarez-Machain, the Supreme Court’s only crack so far at the Alien Tort Statute. The fact-bound 2004 decision denied a cause of action to a plaintiff suing an individual under the tort statute because the allegations were too narrow to satisfy the much broader scope of international law.

And that’s where 2nd Circuit Judge Cabranes told the plaintiffs and Judge Leval to go if they didn’t like the result in Kiobel.

“We are confident that if our effort is misguided, higher judicial authority is available to tell us so,” Cabranes wrote.

The plaintiffs are keen on cases in the 9th and 7th Circuits to give them the kind of split they need to arouse the Supreme Court’s attention.

And though she eliminated a child labor case against the tire company Firestone on Oct. 5, a district judge in Indianapolis expedited her consideration of the tort statute so the 7th Circuit at Chicago could quickly consider it. The plaintiffs in Flomo v. Firestone Natural Rubber Co. accuse the company of encouraging and even requiring parents to put their children to work on a Liberian rubber plantation.

Cabranes suggested a couple of other places for the Kiobel plaintiffs to go. For one, they could remain in federal court by suing individual Shell employees. Or they can pack the whole thing in and take it to state court, where corporations usually don’t have it so easy. That may not be such a bad idea, Hoffman says, if all else fails.