Shortage of forensic pathologists, coupled with COVID-19, has caused major delays in cases 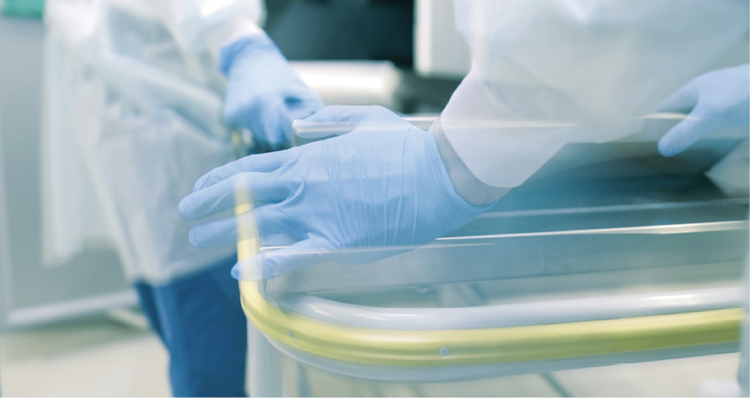 In May 2019, a married man was worried that his lover was going to tell his wife about their affair. He entered her home and shot her in the head while she slept.

The victim, Dominique Clayton, was a mother of four children. Her 8-year-old son found her body when the children returned from a weekend with their uncle.

Within a day, police in Oxford, Mississippi, learned the victim was in a relationship with Matthew Kinne, a member of their department. Kinne was arrested, fired from the force, and a grand jury indicted him on a capital murder charge.

Kinne pleaded not guilty, and both the prosecution and the defense needed the autopsy report to complete the discovery process.

“No defense lawyer in their right mind could go forward with the defense of a capital murder charge where the death penalty was on the table without an autopsy report,” said Tony Farese, Kinne’s defense attorney and president of Farese, Farese, & Farese in Ashland, Mississippi.

The finalized autopsy report took more than two years to complete. When it was released, the defense realized it was too risky to go to trial. In a deal with prosecutors last July, Kinne agreed to plead guilty and accept life in prison without parole.

Mississippi, like most U.S. states, is experiencing a forensic pathologist shortage.

Although autopsies are performed in a timely manner out of necessity, reports are taking months—and in some instances years—to finalize. For example, Carolyn Green, the coroner for Mississippi’s Lee County, said in October that one natural death from 2016 still doesn’t have a finalized autopsy report.

The pandemic—which also precipitated a backlog in cases—has only exacerbated the shortage. In the last two years, forensic pathologists across the country also have been burdened by COVID-19 deaths, a spike in homicides and an increase in accidental drug overdoses.

With the time between the autopsy and the finalized report stretching months or even years, both prosecutors and defense attorneys are waiting longer than usual to bring criminal cases to trial, raising due process concerns.

The forensic pathologist shortage has been decades in the making, building since the practice became board-certified in 1959.

Few medical school graduates choose pathology residencies, and even fewer opt to work in forensic pathology, where the pay is lower than in other practice areas.

There are currently 500 board-certified forensic pathologists working full time. These pathologists are tasked with determining the cause of death for anyone who does not die in a hospital or in hospital cases involving homicide, according to Dr. James Gill, chief medical examiner for the state of Connecticut. Gill is also chair of the National Association of Medical Examiners’ board of directors and the group’s immediate-past president.

In a normal year, Gill says, the U.S. has needed more than double the number of forensic pathologists to keep up with the number of cases sent to their offices. Increasing cases in the past two years have only made the problem worse.

In Chicago, the county medical examiner’s office saw almost triple the cases in 2020. The office typically sees about 6,000 to 6,500 cases a year; in 2020, it saw 16,049. According to spokeswoman Natalia Derevyanny, half of those deaths were COVID-19-related. Opioid deaths increased by 40% from the previous year, and homicides increased by 50%.

“Homicides are the most labor-intensive autopsies that we do,” Gill says. “It can take more than a day to do an autopsy on someone who was shot 15 times. All those wounds need to be photographed; all those bullets need to be dissected.”

“When you are overwhelmed with autopsies, those can’t wait. You can’t say, ‘I’ll wait until next week.’ Those have to take a priority,” Gill says.

“In many cases on a child fatality that we think is going to be a child homicide, initially we might charge felony child abuse, but we really need those autopsy results to go back and charge homicide. We have had to wait nine or 10 months to come back to proceed on a murder charge,” says Billy West Jr., the district attorney for Cumberland County, North Carolina.

In one North Carolina case, a homeowner shot another man while on his own property. The state’s statutory castle doctrine allows for force when people are on their own property and believe an attack is imminent. West says his office has had to wait more than eight months for an autopsy report to determine the validity of a self-defense claim. He needed to know the distance between the two individuals and the victim’s toxicology when the shots were fired.

“We couldn’t determine what charges we wanted to proceed on, if any, until we had the results,” West says.

With the report, West learned the blood alcohol level of the man who was shot was twice the legal limit, and the distance between the two men was close enough to support the defendant’s claim that he believed an attack was imminent.

“We need to take that burden of student loans out of the equation,” Gill says, adding forensic pathologists need higher salaries.

Mississippi, where the backlog of incomplete autopsy reports stretches back years, is trying to find other ways to ease the burden.

The state’s crime labs have two forensic pathologists, and at press time, they expected to soon hire at least one more. At least four total are needed, says Sean Tindell, commissioner of the Mississippi Department of Public Safety.

In 2021, the state legislature passed a law allowing for the creation of medical examiner investigator positions. The state has since hired four of these investigators, Tindell says. Two of them have forensic backgrounds, and the other two have backgrounds as deputy coroners and EMTs. They can take over prep work and administrative responsibilities for the forensic pathologists, leaving them free for autopsies and report creation.

Tindell’s office also hired a director to handle administrative duties so the forensic pathologists can focus on autopsies and comply with the new policy.

Tindell hopes the death investigators can take on tasks that have previously interrupted pathologists’ autopsy work. He says there are circumstances in which a death investigator could be employed to testify in court instead of the pathologist, such as a recent case involving a shooting at a gas station.

“It was all on video,” Tindell says. “In that case, the chief medical examiner came all the way from Jackson to testify. I don’t think it was necessary for the medical examiner to come all that way.”

“It’s certainly been frustrating to defense lawyers as well as prosecutors because there is no way you can try a case that requires mandatory life or a capital case without the autopsy report,” Farese says. “I think everyone is on the same page here.”

This story was originally published in the February-March 2022 issue of the ABA Journal under the headline: “Dead and Waiting: A national shortage of forensic pathologists, coupled with COVID-19, has caused major delays in cases.”