Today, Rose on Vibes plays at least once per month and has played up to six times per month. Rose and her band members aren’t paid a lot, but they never play for free.

“It suppresses wages for everyone when musicians play for free,” she says. “If you’re not a musician, you have no idea what it’s like to play music and how hard it is, how much work it takes.” This, she says, “is no hobby.”

Rose coordinates gigs, musicians, set lists and more. The band has a regular gig at a local restaurant and also is on the rotation list to play at the Nashville International Airport. In addition to the vibraphone, Rose performs on the gyil, an African instrument similar to the xylophone, which she learned when she traveled to Ghana in 2007.

She intended to take the trip to learn drumming and improve her rhythm, but she ended up discovering the gyil and connecting to the music, the culture and the people in a way that has influenced her ever since. Rose on Vibes now mixes African influences into its jazz sets at every gig, and Rose has composed some songs for the instrument.

In addition to running the band and her 12-employee firm, Rose also raises her 8-year-old grandchild, whom she adopted five years ago, and cares for her 91-year-old mother. Managing multiple responsibilities has always come easy, according to Rose. “I like to say I can be at two places at once,” she says.

Next up, she’d like to record a new CD. And an immigration law conference is coming to Memphis this month. Rose plans to attend and speak at the conference. And,of course, Rose on Vibes will be there, too. 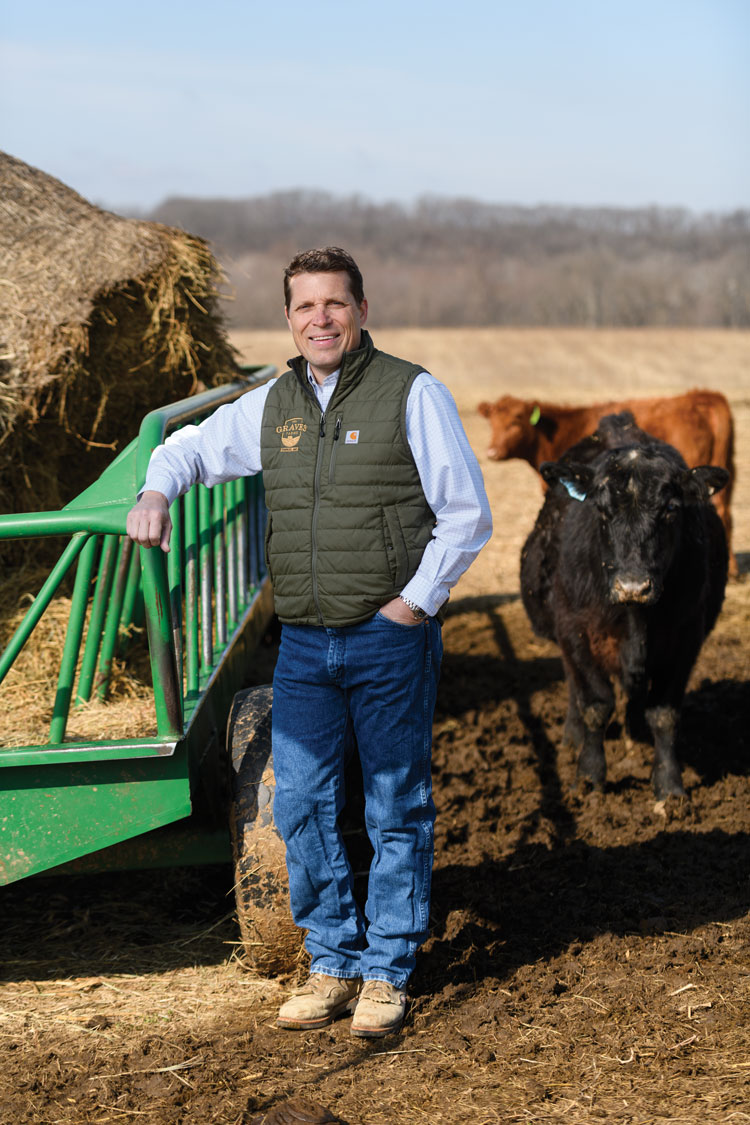 Todd Graves: “When I get done working on the farm at the end of the day, I can see what I’ve done, and I’ve made things better.” Photograph by Steve Puppe Photography.

The Graves family has been farming and raising cattle in Missouri’s northern Platte County for more than 150 years, and that legacy drives Todd Graves.

“I grew up on the family farm. I didn’t know where the family ended and the farm began,” says Graves, a founding partner at Graves Garrett in Kansas City. “When I went to college, I wanted to be a farmer—a rancher—and over time my interests changed and I migrated away from it, but it never really left me.”

With a law degree and a master’s degree in public administration from the University of Virginia, Graves accomplished much. He managed 120 lawyers across three offices as the U.S. attorney for the Western District of Missouri and was a member of the U.S. attorney general’s advisory committee, helping draft Department of Justice policies.

For more than 20 years, Graves has done it all while also raising cattle on a 270-acre farm near Edgerton, Missouri, north of Kansas City. The land has been in his family since 1867. He also owns a separate spread, the J.C. Ranch, 5 miles away.

At any one time, Graves has about 300 head of cattle, raising premium, “grass-finished” beef for the plate. He sells mostly to restaurants and through the traditional supply chain.

Graves calls the farm a responsibility and a love. But from the beginning, he says, he took ranching as seriously as he took his practice. “I didn’t want to do it in a hobby way; I wanted to do it as a legitimate, freestanding business,” he says.

To do that, he knew from the beginning that he had to make certain decisions. When he graduated from the University of Virginia, he was offered a job at a major New York City law firm that paid $95,000 per year, quite a large amount of money in the early 1990s, he says. Instead, he came home to Jefferson City, Missouri, to take a job that paid $26,000 per year. He has never regretted it.

Most days, Graves makes the 40- to 45-minute commute to the firm, but he’s also built a thoroughly modern office in a barn on the farm that makes multitasking easier. “There are some days I can work out there and be on the phone with clients in New York, and then I go outside and move cattle, and then go back on the phone,” he says.

Ultimately, Graves is happy as a lawyer, but he definitely appreciates the perspective that comes from his connection to the land.

“The practice of law is more theoretical, more of a service business, and our product is not as crystal clear,” he says. “When I fix a fence, I am fixing a fence that my great-grandfather built, and when I get done working on the farm at the end of the day, I can see what I’ve done, and I’ve made things better.”

New York Times best-selling romance novelist Grace Burrowes has always been a writer, but she came late to publishing.

By the time her first published romance novel was released in 2010, she already had established a career in federal procurement, earned a law degree and a master’s degree, and hung out a shingle as a solo practitioner near Hagerstown, Maryland.

Her practice focuses on child welfare law, and she manages about 100 open cases. Over the years, she has employed as many as four additional lawyers to help with a caseload that’s topped 600.

For Burrowes (a pen name), writing began as a personal escape—a way to de-stress after the often-harrowing days she spent advocating for children in cases involving abuse.

Burrowes soon found that she gravitated toward writing romance novels, a genre she’d enjoyed reading since middle school. She spent nearly every evening and weekend writing.

Although the number of finished manuscripts mounted, she was content to let her characters exist solely on her computer. That is, until she attended a Romance Writers of America seminar. After one of the sessions, she had a chance meeting in the hotel bar with an editor who was on one of the panels and she seized the moment.

Friends and family had long encouraged Burrowes to submit her books to a publisher. So with their words ringing in her ears, she says, she awkwardly mentioned her writing.

The editor invited Burrowes to submit three of her best manuscripts. She did, beginning a relationship that eventually resulted in Burrowes publishing more than 30 books with the editor’s publishing house.

From the beginning, she has published under a pseudonym. The purpose, she says, is twofold: Protection for herself and her clients, and the chance to have her work shelved next to some of her favorite romance authors, who also happen to have last names beginning with the letter “B.”

Burrowes has about 70 titles, including e-books and novellas. The types of tales she tells range from modern-day dalliances to period pieces involving lords and ladies of the Scottish Highlands.

She’s also published writing guides, maintains a blog and an online bookstore, and is a popular speaker and panelist at Romance Writers of America conventions. She travels to England at least once per year, and two years ago she took a group of readers on a tour of Scotland, which she’d like to do again soon.

The work is more than fulfilling and fun; it’s also quite lucrative. Burrowes says proceeds from her novels more than double the income from her practice.

Over the years, the extra earnings gave her peace of mind when she was a single parent, and it allowed her to maintain a lifestyle for her and her daughter that was comparable to a dual-income household, she says.

Burrowes says she has about four books going all the time, each in different phases of completion. This allows her to continue writing when a manuscript is being reviewed by her editor or ideas are flowing in a different direction.

She says the fast pace is necessary to keep up with reader demand. “Passionate romance readers will read a book a day; bless their hearts!” she says.

Novel writing, she says, is something lawyers are well-suited to do. “We love words, we have grist for the favorite mills, and we are good with deadlines and contracts,” she says, adding that “creative self-expression is good for us.”