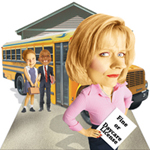 Like it or not, we’re slowly be­com­ing accustomed to having our lives monitored in a variety of ways.

That eye in the sky mounted on the pole over there, for instance, is just waiting to rat you out for running a red light. The feds have been scanning your phone conversations for terrorism-related keywords. Oh, and is that a “nanny-cam” in the eye of that innocent-looking teddy bear?

Those with a high tolerance for this sort of thing tend to shrug it off with a casual remark such as, “Well, if you’re not doing anything wrong, what do you have to worry about?” The answer—at least accord­ing to two Midwestern moms—is plenty.

Both became ensnared in bureaucratic dragnets that threatened to turn ordinary actions into actionable transgressions.

Lisa Snyder of Middleville, Mich., is a stay-at-home mom who tries to accommodate neighbors who have to leave for work before their kids leave for school. That means the kids stand in her driveway for a few minutes each school day waiting for the bus to arrive.

Snyder received a letter in Sep­tember from the state’s Depart­ment of Human Services, ordering her to cease her “illegal day care operation.” Failure to comply is reportedly punishable with a fine, jail time or both. Snyder was told that, under state law, if she wanted to continue allowing children to wait for the bus on her property, she would have to obtain a day care license.

The fact that the original complaint came from a disgruntled neighbor only slightly mitigates the Orwellian heavy-handedness on display here. State Rep. Brian Calley, R-Port­land, has proposed legislation to revise the language of the law so that a neighbor can help out a neigh­bor without having to submit a business plan.

Next we en­counter Sally Harpold of rural Parke County, Ind., who was arrested in July by sheriff’s dep­u­ties for purchasing more than the legal limit of pseudoephedrine, a key ingredient in many cold medicines that can be used in the manufacture of methamphetamine.

Harpold had purchased an over-the-counter cold rem­edy for her ailing husband, and she remained un­der government radar. But when her daughter caught Dad’s cold, Har­pold made a second purchase within a week and a red flag went up at the sheriff’s office in Vermil­lion County, where meth labs have been a scourge. Her name landed on a list of over-the-limit PSE purchasers.

For the “crime” of nurturing fam­ily members—aka being a mom—Harpold was handcuffed, jailed and charged with a class C misdemeanor. Her police mug shot ap­peared on the front page of the local paper. The offense is punish­able by up to 60 days in jail and up to a $500 fine.

Harpold, like fellow mom Snyder, drew some sympathy among legislators and law enforcement officials, and the charge was dismissed after she completed a deferral program, which required her to pay court costs and keep her—hopefully not stuffy—nose clean for 30 days.

So what’s a mom to do? Cross her fingers and hope for common sense to someday become the norm?

A girl can dream, can’t she?