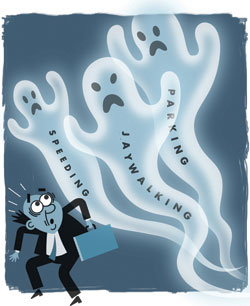 You figured that ‘situation’ just kind of went away? Know this: The law never forgets.

One of the many classic characters to appear on the Seinfeld sitcom during the ’90s was the “library cop,” a tough, Joe Friday-like investigator who hunts down Jerry for not returning a book he took out while in high school. Jerry eventually pays the fine—after being relentlessly pursued.

Even though bureaucracy is an easy target, the point is that something like this rattles around in the system indefinitely and—like the proverbial bad penny—turns up to complicate your life yet again, sometimes years later.

Robin Hall, a married mother of two from Colchester, Conn., was disembarking with her family from a Disney Dream cruise ship in Port Canaveral, Fla., in January when she was stopped by police and informed of an outstanding warrant for her arrest. It seems she had pilfered a pack of smokes from a Florida Wal-Mart—in 1991. Hall had made her court appearance but neglected to pay the $85 fee for costs. For that oversight she spent a few days in a Brevard County jail cell until she could be transferred to Orange County, where the shoplifting incident took place. (Those cigarettes will get you one way or another.)

In February, an Oklahoma City grandmother was forced to clean up a 12-year-old mess from a dog she never even owned. DeBorah Revels was issued a citation in 2001 for failing to confine a dog that was mistakenly thought to be hers. She didn’t pay the ticket or even show up for court. Fast-forward to 2013, as Revels stood in court on a misdemeanor traffic charge. Up popped the info from 2001, and the judge had her arrested and handcuffed. In March, Revels contested the ticket and another judge threw it out, but not before the court got its paws on $53 for costs and other fees.

Alex Timofeev might not have a canine conundrum to contend with, but his youthful follies have certainly come back to bite him in the backside. The Russian immigrant, now 35, moved to Madison, Wis., with his family when he was 14. And as teenagers are wont to do, Alex smoked marijuana with friends on a number of occasions and was charged three times with possession. Each time he pleaded no contest, fulfilled court requirements and moved on with his life.

Having established himself as a chef and a responsible, tax-paying father of two daughters, Timofeev was planning to remarry and seeking permanent residency. But he got an early morning visit in September 2012 from Milwaukee immigration officials informing him that he was to face deportation proceedings under the 1996 Illegal Immigration Reform and Responsibility Act because of the marijuana charges.

Timofeev was detained for four months and still awaits word on his appeal of the deportation. If he loses, he will be sent back to Russia with no hope of ever returning.

And if all that isn’t enough to get you to finally pay that long-ignored parking or jaywalking ticket, then you had better get used to looking over your shoulder.