Sky-High Spy: With GPS Probing, the Zone of Privacy Is Getting Even Smaller 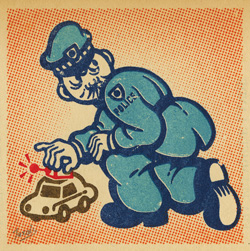 Since at least the 1920s, the U.S. Supreme Court has grappled with whether “sensory-enhancing” techniques used by the police constitute searches or seizures requiring a warrant under the Fourth Amendment.

Over time, the court’s Fourth Amendment jurisprudence has evolved from a focus on physical intrusions to property to a standard emphasizing an individual’s reasonable expectation of privacy.

“We are trending toward a world in which our privacy protections are in a very tiny circle,” says University of Maryland law professor Renée McDonald Hutchins.

On Nov. 8, the justices will take up the constitutional implications of another relatively new sensory-enhancing technology: the Global Positioning System. In United States v. Jones, the court will weigh whether placement of a GPS tracking device on a vehicle used regularly by a criminal suspect, and prolonged tracking of that vehicle’s movements on public streets—all without a valid warrant—violate the Fourth Amendment guarantee against unreasonable searches and seizures.

“I would hope the court would take this opportunity to draw a line in the sand and say we will not allow our Fourth Amendment protections to erode any further,” says Hutchins, who has studied the increased use of GPS tracking by the police.

But Anthony S. Barkow, a former federal prosecutor and the executive director of the Center on the Administration of Criminal Law at New York University, says GPS tracking merely allows investigators to conduct more efficient tracking of activity they could view for themselves.

“In general, we are talking about activity that the police would be able to engage in anyway” without a warrant, says Barkow, who has filed an amicus brief on the side of federal prosecutors. “I just don’t think it’s that troubling, what they’re doing.”

The case stems from a 2005 drug investigation in Washington, D.C., by a joint federal and local law enforcement task force. One target of the investigation was Antoine Jones, a nightclub operator suspected of distributing powder and crack cocaine. Investigators obtained a warrant from a federal district judge to covertly install a GPS tracking device on a Jeep Grand Cherokee registered to Jones’ wife but chiefly used by him.

All sides agree that investigators did not properly execute the warrant. They failed to install the GPS device within 10 days, as the warrant called for, and they installed it while the car was parked in suburban Maryland, instead of in the District of Columbia. Nevertheless, agents used the device to track the movements of the vehicle over four weeks, and they identified frequent visits linking Jones to a drug “stash house.”

A three-judge panel of the U.S. Court of Appeals for the District of Columbia Circuit overturned Jones’ conviction. The court held that Jones had a reasonable expectation of privacy in the public movements of his vehicle over the course of a month, and that the use of a GPS device to monitor those movements was a search that required a warrant.

“Prolonged surveillance reveals types of information not revealed by short-term surveillance, such as what a person does repeatedly, what he does not do, and what he does ensemble,” Judge Douglas H. Ginsburg wrote. “Repeated visits to a church, a gym, a bar or a bookie tell a story not told by any single visit, as does one’s not visiting any of these places over the course of a month.”

At least two other federal appeals courts that have addressed the issue of GPS surveillance in recent years have held that no warrant was required. Dissenting on that issue earlier this year, Judge Diane P. Wood of the 7th U.S. Circuit Court of Appeals at Chicago observed that technological devices that allow the police to constantly monitor a person’s movements “have rapidly attained a degree of accuracy that would have been unimaginable to an earlier generation.”

“They make the system that George Orwell depicted in his famous novel 1984 seem clumsy and easily avoidable by comparison,” Wood wrote.

Appealing the Washington, D.C., case to the Supreme Court, the Department of Justice argues that the privacy interests stemming from GPS tracking are minimal.

“The device does not reveal who is driving the car, what the occupants are doing, or what they do when they arrive at their destination,” said the brief signed by U.S. Solicitor General Donald B. Verrilli Jr. “It provides information only about the vehicle’s location. And the information that the tracking device reveals about the vehicle’s location could also be obtained (albeit less efficiently) by means of visual surveillance.”

Requiring a warrant and probable cause before allowing the police to attach a GPS “would seriously impede the government’s ability to investigate leads and tips on drug trafficking, terrorism and other crimes,” Verrilli added. “Law enforcement officers could not use GPS devices to gather information to establish probable cause, which is often the most productive use of such devices.”

The government relies heavily on a 1983 Supreme Court decision, United States v. Knotts, which upheld the warrantless use of a tracking beeper placed in a vehicle’s cargo that led police to a suspect’s drug lab. The beeper was intended to help the police keep tabs on the vehicle when they lost sight of it on the roads.

The beeper monitoring was not a search, the high court said, because a person “traveling in an automobile on public thoroughfares has no reasonable expectation of privacy in his movements from one place to another.”

The government argues that under Knotts, information that has been exposed to public view, such as the movements of Jones’ Jeep on public streets, remains public even though it is unlikely that any one private individual would observe all of the movements over the four weeks.

However, Jones’ lawyers point out that in Knotts, the Supreme Court explicitly reserved the question of whether the Fourth Amendment permits, in the court’s words, “24-hour surveillance of any citizen of this country … without judicial knowledge or supervision.”

“GPS is light-years away from simple beeper technology,” says Stephen C. Leckar, a Washington lawyer who will argue the case on behalf of Jones. “They just stuck this thing under his wife’s car. This device kept whirring away, and every 10 seconds it remotely recorded where he was and where he went.”

“The framers who wrote the Fourth Amendment wanted a neutral third party to review efforts by government agents to indiscriminately invade people’s privacy,” Leckar adds. “Nothing we have asked prevents the government from deploying GPS. We simply say obey the warrant clause.”

AND THEN THERE ARE THE OFFSHOOTS

The court’s ruling is likely to have implications for, though it won’t necessarily resolve, whether variations on GPS tracking would also require a warrant.

Hutchins of the University of Maryland notes that the Los Angeles Police Department and other agencies have begun using GPS “darts”—sticky material containing a small GPS receiver, transmitter and battery that can be shot at fleeing cars to help cut down on dangerous high-speed chases. Meanwhile, the American Civil Liberties Union is battling law enforcement efforts to obtain cellphone “site location information” without probable cause or a warrant.

Orin S. Kerr, a law professor at George Washington University who also writes frequently about privacy, was less troubled than Hutchins about the warrantless use of GPS on vehicles. He believes the prolonged monitoring of the car on public streets falls squarely within the Supreme Court precedents giving lesser Fourth Amendment protection to an individual’s activities while in public. But the court may find that the installation of the device interfered with the vehicle owner’s property rights, he says.

“Everyone agrees the Fourth Amendment needs to keep up with technology,” Kerr says. “New technologies don’t come with a label of whether they go too far or don’t go too far. That’s the hard question.”