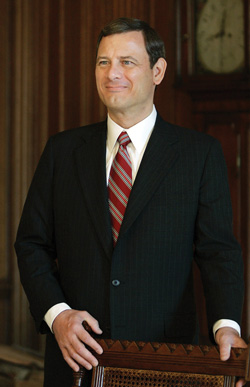 Chief Justice John Roberts: We need to “find a long-term solution to this recurring problem.”

Over the past two years, the rate of unfilled judgeships in the federal district and appellate courts has hovered around 10 percent. That persistently high vacancy rate is a subject of mounting concern to the ABA, which views a fully operating federal bench as crucial to preserving the quality and vitality of the judiciary and the balance between the three branches of government.

“Our federal courts have a constitutional responsibility to execute fair and timely decisions,” says ABA President Stephen N. Zack, who is administrative partner in the Miami office of Boies, Schiller & Flexner. “Persistent judicial vacancies threaten the courts’ ability to do this, eroding public confidence in our system of justice.”

Currently, there are 874 authorized judgeships in the various federal courts created under Article III of the Constitution. Nominations to those posts are made by the president and confirmed by the Senate. But partisan rancor and protracted delays in filling vacancies have left courts unable to dispense timely justice as they struggle with overflowing dockets. During the past year, the Administrative Office of the U.S. Courts has classified more than 40 vacant seats as “judicial emergencies” based on how long the seat has been vacant and the number of case filings that would be assigned to it.

Even nominations with no opposition have been held up. When the 111th Congress adjourned in December, 19 judicial nominees—13 with no recorded opposition—awaited a vote by the full Senate after Judiciary Committee approval. The adjournment killed their nominations for that Congress. The process began all over again when President Barack Obama renominated all 19 at the start of the 112th Congress.

This year, Obama has stepped up the pace of nominations, and the Senate Judiciary Committee is maintaining a brisk schedule. The full Senate has been confirming nominees on a steady basis, a departure from the last Congress, but not in sufficient numbers to keep pace with attrition.

U.S. Chief Justice John G. Roberts Jr. weighed in on the problem in his most recent year-end report on the federal judiciary. “Each political party has found it easy to turn on a dime from decrying to defending the blocking of judicial nominations, depending on their changing political fortunes,” he said, urging the political branches to “find a long-term solution to this recurring problem.”

The ABA, calling for the administration and the Senate to approach the process with a sense of common purpose and bipartisan cooperation, is specifically urging the Senate to give every nominee a prompt up-or-down vote after the nomination is reported by the Judiciary Committee.

The association turned the spotlight on the issue in April during its annual ABA Day in Washington lobbying event. Bar leaders emphasized that the high vacancy rate on the federal bench has real consequences for both individuals and businesses. (The Governmental Affairs Office continues to seek input from both lawyers and litigants on how they’ve been affected by delays in civil matters as a result of judicial vacancies.)

“Our judicial system is predicated on the principles that each case deserves to be evaluated on its merits, that justice will be dispensed even-handedly, and that justice delayed is justice denied,” wrote Carolyn B. Lamm of Washington, D.C., in letters sent to senators just before her term as ABA president ended in August. “Congress should take action to support, not undermine, the vital work of the federal courts.”