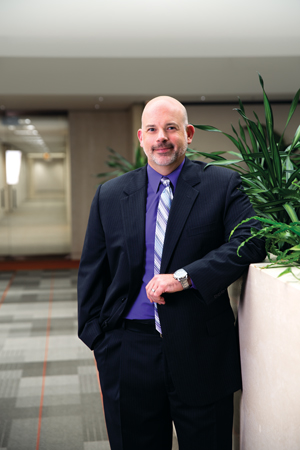 Oliver Yandle: “A lot of things are shifting and forcing law firms to evaluate how to manage and staff all these functions and become as efficient as they can be.” Photo by Tim Klein.

First of a two-part series.

Yes, the ground under lawyers' feet has shifted, but nonlawyers who work at law firms are also enduring seismic job shifts. It's not just the economy; rapidly changing technology, growing client demands and law firm staff demographics also play a role. Jobs have been lost, and those that remain are morphing into bigger-responsibility positions.

Take legal librarians. As their ranks have thinned out—down to one staffer per 42.4 lawyers today compared to one per 37.25 lawyers in 2007, according to a 2013 salary survey from the American Association of Law Libraries—their roles have expanded.

"There's such a proliferation of information that they have to be really skilled at managing information," says the group's executive director, Kate Hagan. "The law library isn't so much a place anymore because more and more resources are available electronically. So the librarian has become a manager of contracts, negotiations and knowing what end users need in terms of research tools. They're more involved in the knowledge-management process at their firm."

That shape-shifting is also affecting IT professionals. Staffing levels are recovering slightly. In its 2009 survey, the International Legal Technology Association noted that 39 percent of respondents reported expected or actual IT staff layoffs. In 2012, only 9 percent of firms reported IT staffing declines, and 21 percent increased staff. But those departments are taking on new tasks.

"I see more and more chief information officers or top-tier IT professionals engaged in the oversight or management of library or research services, and I think the project management aspect of IT is changing," says Randi Mayes, ILTA executive director. "CIOs are also becoming much more engaged in firms' business strategy—connecting technology to marketing and pricing professionals and so on so that legal projects are managed top to bottom."

Ditto for other nonlawyer employees. "As younger people are coming in as lawyers and administrative staff, their skill sets and experiences are different, and that's changing a lot of roles in administrative departments," says Oliver Yandle, executive director of the Association of Legal Administrators, whose members manage the business side of the nation's law firms. "A lot of things are shifting and forcing law firms to evaluate how to manage and staff all these functions and become as efficient as they can be."

Legal secretaries, who were among the first employees let go in recent years, may be seeing the biggest shifts. There's no data on how many of those positions have been eliminated. However, in 2012, firms averaged 43 legal secretaries (down from 53 in 2004) per 100 partners, according to the 2012 Survey of Law Firm Economics (PDF).

"Often the initial reaction to the economic crisis was 'We need to cut our way to profitability' and 'Let's cut the overhead,' " Yandle says. "A lot of legal secretaries found themselves at the wrong end of the equation. But some of those cuts really weren't made very strategically. Firms realized the role was evolving and it varied from firm to firm and practice area to practice area, but also individually as well.

That may be why firms are starting to rethink their approach, he says. They're not necessarily hiring more legal secretaries. But they are taking a harder look at how to more effectively deploy them.

"It used to be that being able to do word processing and organize a calendar was sufficient," Yandle says. Now legal secretaries need to be more skilled in areas like project management, critical thinking, technical sophistication, having a real client-service orientation, and being much more flexible."

Firms are still making a concerted effort to reduce the ratio of nonlawyers to lawyers, Yandle says. Some are shifting to a model of five or six lawyers to one secretary. Others are moving to practice management teams where a core support team serves an entire practice area.

"Instead of secretaries and support staff being assigned to individual attorneys," Yandle explains, "firms are managing the practice with that team."

Next month: Paralegals and legal assistants see their duties grow.