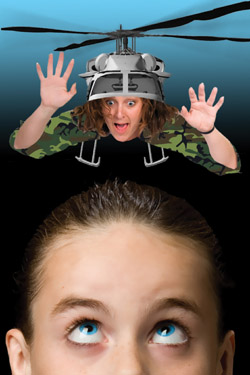 They show up at every baseball game, cheering their kids and hissing the umpire. They regularly text their kids in class and are devoted to “nanny cams.” And when college comes around, these parents stay so long they seem ready to check into the dorm.

“Helicopter parents” have hovered for decades—but in an increasingly competitive and uncertain world, more are fitting the description: micromanaging every aspect of their child’s development, engaging in an inordinate amount of involvement and, some say, handicapping their kids emotionally.

Some psychologists say such parenting has crossed the line from involved to overzealous, often leaving the child without an independent outlet.

But two law professors say courts are rewarding overprotective parents, giving them the edge in child custody cases despite the psychological harm that overprotection may lead to in child rearing.

“It’s a combination of law that means well and what’s become the norm in our society, but there’s not always a good result,” says Gaia Bernstein, a professor at Seton Hall University School of Law and co-author of an article scheduled to be published next year in the UC Davis Law Review.

Bernstein and her co-author—Zvi Triger of the College of Management Academic Studies School of Law in Rishon LeZion, Israel—argue that, particularly in the area of custody disputes, legislatures and courts effectively enforce intensive parenting norms. The two say this trend is exacerbating existing biases in the child welfare system and forcing intensive parenting ideals on those who don’t share those values.

So what exactly is a helicopter parent? According to Bernstein and Triger, these parents “rely on a multitude of monitoring devices such as ‘nanny cams,’ and safety devices such as helmets and knee pads.” They say that “parents monitor [children] by organizing and regularly participating in a growing number of school and after-school activities. … Colleges have recently adjusted to accommodate a new generation of parents who insist on being in direct contact with college administrators and professors in order to comprehensively monitor their children’s lives.”

If this sounds extreme, Bernstein says, that’s because it is. But it’s also becoming extremely commonplace. In the race for involvement, parents must know the names of teachers and friends. They must be actively involved in their children’s activities—maybe coach Little League or volunteer at school and church. Helicopter parents text their kids dozens of times a day, save hundreds of photos on their cellphones and sign their kids up for every lesson, sport and extracurricular imaginable.

“You think of Joan Crawford [in Mildred Pierce] saying, ‘I’d do anything for those kids … anything,’ ” says Walter Olson, editor of the blog Overlawyered and a senior fellow with the Cato Institute, a libertarian think tank in Washington, D.C. “Attending sports camps, supervising food or entertainment choices, even if it’s time for a child’s independence —it’s more evidence for some that they are as great a parent as they thought.”

Extreme involvement is increasingly used by some courts as a litmus test for how much a parent cares—and sometimes by parents to lay a foundation for a future custody battle. The caregiver who spends the most time, measured by intensive parenting standards, may now have the strategic advantage when a judge is trying to determine who deserves primary custody. According to Bernstein, the majority of states consider the amount of time a parent spends with a child as a relevant factor in adjusting child support.

“So much in divorce litigation is an arms race—you may not want to start something, but you have to engage, to keep up. Or act pre-emptively,” Olson says. “If you’re in striking distance of a custody challenge, you have an incentive to rearrange your life and behavior in a way that would be pleasing to the judge.”

Historically, courts have used the primary caretaker standard in custody disputes; now they primarily implement the “best interest of the child” test, which takes into account both quality and quantity of involvement. Many states have laws that set out factors that should be considered, such as the close relationship between a parent and child. Some experts say the changing standard has allowed judicial involvement to extend too far.

“I could definitely see where courts could encourage that helicopter-parent behavior,” says attorney Rebecca Grove. “But it’s very suffocating.”

Grove is a Memphis attorney whose divorce law practice focuses on fathers’ rights. She’s seen cases where one parent, often the mother, signs the child up for “everything she can think of” in an effort to gain monetary support and assert control. Grove says courts often defer to the hyper-engaged parent and then reward them financially through child support.

“The judge will say it’s great the kids are in ballet, tutoring, etc., regardless of whether he or she needs it, and the other parent is still responsible for paying their pro rata share,” Grove says. “And if the other parent isn’t involved, the court would look at them as a deadbeat.”

Grove and others don’t discount the benefits of being an involved parent, but they do caution against judicially reinforcing the prevailing trend of intensive parenting.

Moms are more often the “smothering” parent, but by the same token, Bernstein says, this new, de facto legal standard has had a disproportionate impact on women, causing additional pressure for perfection in child rearing. Intensive parenting is also a “class dependent” norm, she says, where those with the money to compete at a heightened level are setting judicial standards from the top down.

Intensive parenting ideals “are not shared by [those] who do not have the resources or desire to compete in this way, and it’s also not shared by other cultures,” Bernstein says.

In fact, there has been a growing backlash against this new societal norm.

The most high-profile example may be Lenore Skenazy, a newspaper columnist who stirred up controversy after she wrote about letting her then-9-year-old son ride the New York subway by himself. The resulting ruckus earned her the moniker “America’s worst mom” and compelled her to write Free-Range Kids: How to Raise Safe, Self-Reliant Children (Without Going Nuts with Worry), an anti-intensive-parenting manifesto encouraging the liberation of children from parental control.

But despite this growing movement, Bernstein says incorporating intensive parenting norms into legal standards could prevent what might be a natural evolution away from these ideals.

“It can be detrimental to a child’s psyche. They can’t make their own decisions, it can increase anxiety, and there’s often more substance abuse,” Bernstein says. “We have to be very careful before we incorporate intensive parenting into the law. In some cases it might be the norm, but not a good legal standard.”

Custody disputes are just one area of the law where intensive parenting is influencing legal standards. Courts are allowing more tort actions based on subjective “good parenting” ideals, opening the door for what Bernstein considers a dangerous domino effect. Bernstein says the continued constriction of the parental immunity doctrine is an “enabling structure” for the incorporation of intensive parenting practices into law.

“Already, in some cases, women are being put into civil confinement if they drink during pregnancy,” Bernstein says. “We’re concerned about this going further. Do we want doctors reporting women who don’t take folic acid during their pregnancy? I think not.”

Bernstein also points to lead poisoning cases, where courts are allowing claims against parents who allegedly weren’t supervising enough. “You can see the progression,” she says.

The reasonable-person standard in negligence law has created moving targets of social expectations, Olson says. He points to schools that won’t administer medication to children for fear of lawsuits and cases where parents have gotten into trouble for leaving their kids in the backseats of cars on days that aren’t particularly hot.

“People now worry about liability for those same child-rearing practices that were common in our parents’ and grandparents’ day,” Olson says. “Now the law requires constant supervision, and it’s inviting helicopter behavior.”

Olson cautions against legal standards pressuring people toward conformity. “Courts should be looking for ways to resolve cases that leave room for people to decide what kind of parent they want to be.”