Speaking Up: Helping Law Students Break Through the Silence of Depression 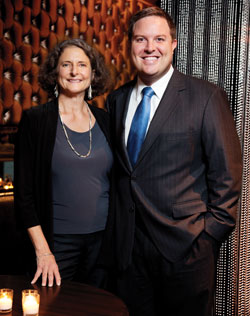 Photo of Marjorie Silver and Wynne Kelly by Len Irish.

While vacationing with his family in the summer of 2005, Bill Treanor got the call every law school dean dreads. One of his most promising recent students, Fordham University School of Law grad Dave Nee, had taken his own life.

“People were just devastated by his death,” says Treanor, now dean at Georgetown Law Center. “Depression is a real blight on so many law students, and part of the reason why it’s so painful and can lead to such terrible consequences is that people who are depressed think they’re alone.”

After Nee’s death, a group of his friends developed a program to fight depression and prevent suicide among law students. This school year, the Dave Nee Foundation has brought its Uncommon Counsel program to more than 1,000 students across the country, educating the newest members of the profession about depression, its prevalence in the law and the effectiveness of treatment.

“We realized that law school is a hotbed of untreated depression,” says Wynne Kelly, a friend of Nee’s and an Uncommon Counsel volunteer. “We want law students to know that they are at higher risk for depression than the general population, and that there are treatments and resources that can really help them to be better and happier law students.”

The statistics on law student depression merit concern. Law professor Larry Krieger of Florida State University studies how the law school experience affects students’ mental health. He has reported that between 20 and 40 percent of law students suffer from clinical depression by the time they graduate; that the incidence of clinically elevated anxiety, hostility and depression among students is eight to 15 times that of the general population; and that, out of 104 occupational groups, lawyers rank the highest in depression and fifth in incidence of suicide.

The reasons for law student depression are well-documented. Marjorie Silver, a professor at Touro Law Center in Central Islip, N.Y., who speaks to students about her own struggle with depression, notes several contributing factors. First, law students come into the profession expecting success—and then 90 percent are disappointed when they don’t rank in the top 10 percent. Further, Silver says, students are thrust into an unfamiliar learning environment in which the predominant Socratic teaching method undermines self-esteem.

“We’re dealing with students who all expect to do well, who have never gotten lower than a B before,” says Silver, who has been active in expanding mental health programming offered through the New York Lawyer Assistance Trust. “Depending upon how much the law school is doing to help students put that in perspective, it can really undermine them.”

The economic downturn has complicated life for law students, who feel tremendous pressure to succeed and worry that they will never see a return on their hefty investment, Treanor adds.

But law schools are stepping up. Ten years ago professors wouldn’t hound students who stopped showing up for class on the theory that adults could make that choice, Treanor says. Today’s professors are taking a different tack.

“Now what we’re realizing is that often when students aren’t coming, it’s not necessarily a choice but because they are in pain in some way, suffering from depression,” says Treanor, who has expanded the counseling services available to Georgetown law students.

“Since we lost a friend, our message is not only to be vigilant about yourself but to look out for your friends,” says Kelly, an assistant U.S. attorney in Washington, D.C. “We need to look out for each other because of the idiosyncrasies of this profession. We’re at a higher risk than the general population; but with treatment, lawyers can get back on the right track.”

Michael Lane, a shareholder with New York City-based Anderson Kill & Olick and an adjunct professor at Fordham, received the foundation’s 2011 Uncommon Counselor Award for his commitment to the betterment of the profession and concern for fellow attorneys and law students. Lane was one of Nee’s professors and has witnessed firsthand how the foundation’s programs have helped young lawyers.

“When these young attorneys come in and talk about it so earnestly,” Lane says, “it really breaks down the walls. There’s no need to suffer.”