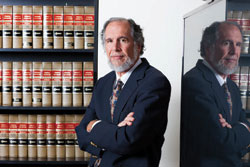 Ira Burnim: “The disability community is excited about the Justice Department’s action, and we support the position they took.” Photo by Stacy Zarin Goldberg.

State bars around the country are on notice that assessing prospective attorneys’ fitness to practice law based on their mental health may discriminate against individuals with disabilities.

The U.S. Department of Justice said that states may examine applicants’ prior behavior, but not their mental health status, when determining whether to admit them as practicing lawyers. Justice also said that many recommendations for fitness to practice law were being made based on stereotypes of individuals with mental health disabilities.

The Justice Department has given “a pretty clear statement that it violates federal law to inquire into mental health diagnosis and treatment, rather than conduct, during the attorney licensing process,” says Ira Burnim, legal director of the Judge David L. Bazelon Center for Mental Health Law in Washington, D.C., which filed the original complaint to the Justice Department in January 2011, spurring the investigation. “The disability community is excited about the Justice Department’s action, and we support the position they took.”

The DOJ advised Louisiana and Vermont last winter that fitness or character reports asking questions about applicants’ mental health and then requiring follow-up, detailed medical information violate Title II of the Americans with Disabilities Act. The provision bars public entities from discriminating against individuals with disabilities.

The Justice Department’s disability rights arm of its Civil Rights Division is responsible for enforcing the law. The DOJ also issues regulatory provisions governing state practices for attorney licensure. While the admittance process varies across the country, each state nevertheless must make sure its applicants have demonstrated sound mind, good moral character and fitness to practice law.

In early February, Jocelyn Samuels, the acting assistant attorney general, wrote to the Louisiana Supreme Court. She stated that while the court fulfills “this important responsibility by asking questions related to the conduct of applicants, … questions based on an applicant’s status as a person with a mental health diagnosis do not serve the court’s worthy goal of identifying unfit applicants, are in fact counterproductive to ensuring that attorneys are fit to practice, and violate the standards of applicable civil rights laws.”

A similar letter was sent in January to the Vermont Human Rights Commission. In March, the state supreme court rejected a candidate based on the individual’s conduct, rather than mental health history.

A commissioner who heard the case found that the “applicant’s demonstrated inability to focus and to ‘filter his presentations’ in a variety of legal forums would render his representation of clients other than himself highly problematic,” the state supreme court said, “and demonstrated an inability to ‘make proper presentations of fact and law on behalf of a client or to focus on the client’s needs in or out of court.’ “

Like other states throughout the country, Louisiana and Vermont require bar applicants to request that the National Conference of Bar Examiners prepare a character report.

As part of the application process, prospective attorneys fill out forms provided by the NCBE, including an application with 28 questions intended to help discern character and fitness to practice law. The conference estimates that about half of the country’s states use NCBE forms, either for all their applicants or for a class of candidates, such as those from out of state.

In its letter to the Louisiana Supreme Court, the Justice Department focused on three questions in the NCBE forms that asked about the status of an applicant’s mental health, alcohol and substance abuse, and whether applicants have emotional or mental disorders that, if left untreated, could affect their ability to practice law.

Applicants who have responded affirmatively to particular questions about their mental health were then asked to provide additional information, including treatment records. Some states, including those that use the NCBE forms, have chosen not to use questions pertaining to mental health diagnoses and treatment as part of the screening process.

According to the Justice Department, Louisiana applicants who have reported a mental health disorder or treatment have then been required to produce detailed medical information related to their condition. But the documentation requested by the admissions committee can “contain information of an extremely personal nature which is irrelevant to the applicant’s ability to practice law,” Samuels wrote.

In the meantime, the NCBE announced it is changing its standard questions related to mental health. In late February the examiners sent a memo to bar admission administrators announcing word changes to two questions and a complete replacement for the question most at issue with the Justice Department’s findings.

In the memo, Erica Moeser, NCBE president, explained that “while NCBE is not a covered entity under Title II of the Americans with Disabilities Act, we are mindful of the pressure that DOJ has brought to bear upon jurisdictions that use our questions.”

Whether state bar committees should be able to review the mental health of their prospective lawyers is still an open and complicated question, some ethics experts say. For example, what happens when an applicant’s mental health issues coincide with reckless behavior? In a recent case, a University of South Dakota School of Law student was denied admission to the South Dakota bar after a bipolar diagnosis. However, the applicant also had been arrested twice for driving under the influence and pleaded guilty in both cases.

The South Dakota Board of Bar Examiners recommended denying admission, finding that the applicant had failed to prove good moral character by clear and convincing evidence. Late last year, the South Dakota Supreme Court concluded that the “cumulative effect of [the applicant’s] lack of candor, poor judgment, criminal record and unreliability … justif[ies] the board’s decision.”

Dennis A. Rendleman, ethics counsel for the American Bar Association’s Standing Committee on Ethics and Professional Responsibility, says whether bar applicants’ mental health should be examined as part of their fitness to practice law is not a simple yes-or-no question.

“Should a person who has sought mental health care be prohibited from practicing law?” Rendleman asks. “That would just lead individuals who want to practice law to avoid seeking care. That’s the wrong message to send.” On the other hand, Rendleman says, “we do know that some of the highest rates of mental health issues and substance abuse are present in the legal profession.”

This article originally appeared in the June 2014 issue of the ABA Journal with this headline: “A Matter Over Mind: State bars may probe applicants’ behavior, but not mental health status.”