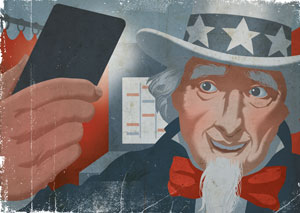 Many people love using cellphones to take selfies and post the pictures on social media. Lately, one version of such photos has drawn the attention of lawmakers, free speech advocates and the courts. They're called ballot selfies, in which people take shots of their election ballots and share them online.

While most people take ballot selfies to proudly display their civic pride, some lawmakers apparently believe they could be used to influence others and fear it could lead to voter coercion or vote buying. With the presidential election coming in November, that could prove to be an issue.

Some states have prohibited such use of technology in the polling place and voting booth. In 2014, New Hampshire amended a law that already prohibited voters from allowing another person to see how they vote. The amendment clarified that voters also cannot take photographs or digital images of their marked ballots and distribute them on social media.

Other states, such as Tennessee, prohibit the use of cellphones for any reason during the voting process. Still other states have taken the opposite approach, allowing voters to take pictures of their own ballots and show them to whomever they choose. Utah, for example, amended its law so that people are not prohibited “from transferring a photograph of the individual’s own ballot in a manner that allows the photograph to be viewed by the individual or another.” Arizona has a similar law allowing ballot selfies, and a new bill in California would legalize ballot selfies too.

“Due to the rampant problems of vote buying and voter coercion that pervaded many American jurisdictions prior to the adoption of the secret ballot, many states have long had general prohibitions against voters showing their marked ballots to others for the purpose of indicating how they cast their vote,” explains Nashville, Tennessee, election law attorney Daniel Horwitz, who recently authored “A Picture’s Worth a Thousand Words: Why Ballot Selfies Are Protected by the First Amendment” for the SMU Science and Technology Law Review.

“The much more recent legisla-tion prohibiting voters from taking digital photographs of their ballots and posting them on the Internet, however, is almost certainly attrib-utable to the rise in popularity of social media platforms like Facebook and Twitter,” Horwitz says. “Fortunately, however, although recent technological advances have come with any number of new problems with respect to election administration, vote buying has effectively ceased to exist in the United States, and it has not returned with them.”

Critics of these laws contend that banning individuals from photographing their ballots or disseminating those images to others infringes on fundamental First Amendment free speech rights.

New Hampshire State Rep. Leon Rideout, a Republican who challenged his state’s ballot selfie law, certainly believes so. “While seemingly a small, inconsequential law that could have gone unnoticed, it is definitely an erosion of First Amendment rights,” Rideout says. “I feel it is important for people to have the ability to post a picture of their ballot. As an amateur photog-rapher, I know a photo is a powerful means to convey a message. … A photo of a first-time voter’s ballot is much more powerful [for a citizen] in showing his or her pride at voting than just a spoken or written word,” he adds.

Last August, a federal district court invalidated the New Hampshire law in Rideout v. Gardner. Judge Paul Barbadoro identified it as a law that restricts speech based on content, because it prohibited digital or photographic images indicating how someone voted.

Applying strict scrutiny, Barbadoro reasoned that the state failed to show it had a sufficiently compelling interest. He wrote that “neither the legislative history nor the evidentiary record” showed that the state “has an actual or imminent problem with images of completed ballots being used to facilitate either vote buying or voter coercion.”

Barbadoro also wrote that, even if the state could show a compelling interest, the law was not narrowly drafted because it would “punish only the innocent while leaving actual participants in vote buying and voter coercion schemes unscathed.” Voters in the New Hampshire primary this past February were free to post selfies if they wanted.

In October, the American Civil Liberties Union of Indiana obtained a preliminary injunction prohibiting enforcement of a similar Indiana law banning the taking of digital images or photographs of the voter’s ballot while the voter is at the polling place. U.S. District Judge Sarah Evans Barker determined that the law was a content-based law subject to strict scrutiny.

Barker, like Barbadoro in the New Hampshire case, ruled that the state failed to show a real problem with voter coercion or vote buying. She also reasoned that the Indiana law was not narrowly tailored.

“More to the point, even the prohibition on taking and sharing pictures of marked ballots draws into its restrictions too many voters by including those who may wish to take photos for entirely legitimate and innocuous reasons,” Barker wrote in Indiana Civil Liberties Union Foundation v. Indiana Secretary of State.

Horwitz, the Tennessee election law attorney, applauds the federal district courts’ analysis of the New Hampshire and Indiana laws, pointing out that the states offered no evidence that ballot selfies facilitated any vote buying.

However, a prominent election law scholar disagrees with the decisions. “The main problem with those cases is the failure to credit the government’s interest in preventing vote buying, which is facilitated once there are reliable means to verify how one voted,” says Richard Hasen, who teaches at the University of California at Irvine School of Law.

“I would have liked to see the courts strike the First Amendment balance differently, especially since it would only be the distribution of the picture—and not speech about how one voted—which would be limited,” Hasen says. “And with elections, we already can limit some speech consistent with the First Amendment, such as politicking-free zones around polling places.”

While acknowledging that there is an absence of evidence indicating that ballot selfies have led to vote buying or coercion, Hasen warns that it easily could happen. “I think it has the potential to become a problem because we know it is a problem with the sale of absentee ballots, where people can similarly verify how they voted,” he says.

New Hampshire has appealed Judge Barbadoro’s decision to the 1st U.S. Circuit Court of Appeals at Boston. Meanwhile, the Indiana case is proceeding at the federal district court level. “The state did not appeal the trial court’s preliminary injunction ruling,” says Bryan Corbin, who is the public information officer at the Indiana attorney general’s office. “Instead,” he adds, “the case is moving forward with further proceedings in the trial court, and the parties next will file their motions for summary judgment.”

Experts on both sides anticipate that the litigation trend will continue. “Additional legal challenges to ballot selfie prohibitions are very likely to crop up in other jurisdictions,” Horwitz says. “During the November 2014 election, approximately 35 states prohibited ballot selfies in one form or another, and several states—Tennessee, for example—have since followed suit.” He notes that more legislators are also introducing measures to allow ballot selfies.

“I would hope that states will take these cases further up the line in the hopes of getting a more favorable ruling from the federal appellate system,” Hasen says.

This article originally appeared in the May 2016 issue of the ABA Journal with this headline: “Ballot Selfie Battle: States seek to stop people from posting photos showing how they voted.”