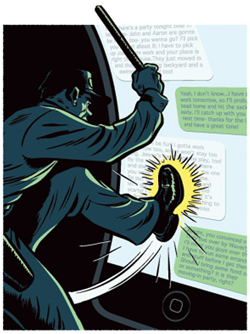 What do a cellphone and a cigarette package have in common? Both can be found on someone during an arrest, and law enforcement may open them up without a warrant and see what’s inside, says the California Supreme Court.

The January opinion involves a Motorola Razr phone found in the sweatshirt pocket of a man arrested in April 2007 for selling the drug Ecstasy to a police informant. A Ventura County sheriff’s officer, who was listening in on the transaction through a wireless transmitter, seized suspect Gregory Diaz’s cellphone after he was detained. There, the officer made a warrantless search of the phone’s text messages, finding the message, “6 4 80,” meaning six pills for $80.

Since the phone was the defendant’s personal property and it was found on him when he was arrested, the court in People v. Diaz said the search was constitutional.

But the Ohio Supreme Court came up with different results in a case with a similar fact pattern. In Ohio v. Smith, the high court held in 2009 that unless an officer’s safety is at stake or there’s an emergency, the Fourth Amendment prohibits warrantless searches of cellphones seized during a lawful arrest.

The cases differ over whether the cellphone’s extensive amount of electronic information gives the owner the expectation of privacy. Ohio Justice Judith Ann Lanzinger said that a cellphone’s ability to store extensive data gives owners a higher level of privacy, requiring a warrant.

“Once the cellphone is in police custody,” the judge said, “the state has satisfied its immediate interest in collecting and preserving evidence and can take preventive steps to ensure that the data found on the phone is neither lost nor erased.”

However, California Justice Ming W. Chin, writing for the state’s majority, declined to distinguish cellphones from other seized items. He said the phone was a personal object discovered during custodial arrest and could be searched without a warrant. He also cited three U.S. Supreme Court Fourth Amendment cases, all of which were decided more than 30 years ago, and likened the phone to such items as a cigarette package and personal clothing.

Diaz’s attorneys plan to appeal the case to the Supreme Court. In 2010 the high court turned down a cert petition for Smith.

Meanwhile, the number of cases involving the search of a cellphone is growing. About 50 cases address warrantless searches of cellphones, says Adam Gershowitz, associate professor of law at the University of Houston Law Center and author of the 2008 law review article “The iPhone Meets the Fourth Amendment,” published by the UCLA Law Review.

About three-quarters of the existing opinions go the way of Diaz, Gershowitz says, while the rest are similar to Smith.

Nor is it uncommon for federal judges to exclude evidence procured from warrantless cellphone searches. “Judges are offended by the idea,” Gershowitz says, “but they aren’t willing to go to the mat about it. And a bunch of cases plead out.” Yet Gershowitz doesn’t think the Supreme Court will grant cert on Diaz, either.

In its cert petition for Smith, Ohio argued that cellphones have become so common and that their storage capacity is so extensive, lawful search guidance from the U.S. high court is necessary. Smith’s lawyers countered that it wasn’t the right time for the high court to take the case, because cellphone technology is changing so rapidly.

“The Supreme Court isn’t ready for this, but the day is coming,” Gershowitz says, adding that the high court did ask for further briefing in Smith. “Courts are flailing around in the dark, and they don’t know what to do.”

A bright-line rule would be helpful, he adds, perhaps involving a time limit for police to search cellphones, or guidelines about how far law enforcement could dig into someone’s cellphone data.

Diaz cites landmark Fourth Amendment cases United States v. Robinson, where in the early 1970s a police officer frisked a suspect and found 14 vials of heroin in a crumpled cigarette package, and United States v. Edwards, a 1974 opinion in which police took a detainee’s clothing to search for paint chips a few hours after he was arrested for breaking into a post office. It also cites United States v. Chadwick, a 1977 opinion involving a warrantless search of a footlocker, which turned out to be filled with marijuana. Police arrested individuals while they were loading the item into the trunk of a car.

But in the Diaz dissent, Justice Kathryn M. Werdegar agreed with the Smith majority. “Never before has it been possible to carry so much personal or business information in one’s pocket or purse,” Werdegar wrote. “The potential impairment to privacy if arrestees’ mobile phones and handheld computers are treated like clothing or cigarette packages, fully searchable without probable cause or a warrant, is correspondingly great.”

Diaz declined to cite an unpublished 2007 federal district court ruling that kept out a defendant’s cellphone data, based on a warrantless search of the device. In that case, United States v. Park, a judge in the Northern District of California found that officers who searched the defendant’s cellphone and obtained phone numbers and a call log went “far beyond the original rationales for searches incident to arrest, which were to remove weapons to ensure the safety of officers and bystanders, and the need to prevent concealment or destruction of evidence.”

Park, however, is cited in Smith, in which police went through Antwaun Smith’s cellphone call log after he was arrested in 2007 for trafficking and possession of cocaine, possession of criminal tools and evidence tampering.

Officers reviewed the call log to confirm that the cellphone they found showed a call made to a government witness, who allegedly set up a drug deal with him. Although the record doesn’t indicate when the search of the phone was done, testimony showed that a portion of the search happened when officers returned to the police station.

A jury found Smith guilty on all counts. His conviction was upheld in the state appellate court, but reversed and remanded by the Ohio Supreme Court.

In Ohio, law officers no longer go through cellphone data without a warrant, says Timothy Young, director of the Ohio public defender’s office.

GET IT WHILE YOU CAN

The opposite is happening in California, says Jason Leiderman, a Ventura, Calif., lawyer who represents Diaz. “Cops will go through anything and everything they can until the courts tell them not to,” he says. “The word is out among law enforcement that you should be searching these phones while you can.”

According to the California attorney general’s office, cellphones and laptop computers that are used as data storage devices are searchable if they are found on a person’s body at the time of arrest. Data that could be searched would likely include text messages, photos and calendars. However, the office notes that it’s unlikely either device could be used legally by law enforcement as a search tool without a warrant, so officers could probably not use them to access someone’s e-mail or bank records.

Leiderman disagrees. “Until this mess gets hashed out, my advice is don’t keep stuff on your smartphone, or don’t keep your smartphone on your person,” he says. Generally, he adds, cellphone data that police want to see comes from arrests involving alleged drug sales, vice, gangs and stolen property.

But there’s nothing stopping police from looking at the data in any sort of arrest. He advises Californians to keep their cellphones in the center console while in vehicles.

“My clients e-mail me, they text me and they send me pictures of stuff from crime scenes,” Leiderman adds. “It’s concerning—‘What if I get pulled over?’ “