Stringing Them Along? Case Details Hint at Rancorous Rationale Behind Tricky Tactics 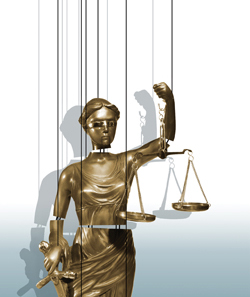 Courts exist to right wrongs and give a voice to those who otherwise wouldn’t be heard. But they can also be used for what appear to be less noble purposes, like furthering personal gain and facilitating revenge.

Two men, in separate cases, engaged in some rather unusual legal maneuvering to achieve their ends. And, reading between the lines, one can imagine them thumbing their noses at their opponents and gleefully declaring “Gotcha!”

Wellington, Fla., businessman John B. Goodman—founder of the International Polo Club Palm Beach and heir to a Texas air-conditioning fortune—faces both criminal and civil trials relating to the death of a motorist in an accident in which Goodman is charged with DUI-manslaughter.

A wrongful death lawsuit filed by the victim’s parents could cost Goodman some or all of his assets, which reportedly include a yacht, an airplane, polo ponies and an unspecified amount of cash spread among various trusts and companies.

Some say one of those trusts—a fund for his two teenage children—is worth as much as $300 million. Goodman had it declared off-limits to any settlement of the civil lawsuit. But what happened next is what raised more than a few eyebrows.

In a move described by one judge as bordering on “surreal” and taking the court into a “legal twilight zone,” Goodman legally adopted Heather Hutchins, his 42-year-old girlfriend, in October in Miami-Dade County. This entitles her to one-third of the trust fund formerly split between his two biological children.

Because the adult “daughter” is of legal age, she’s eligible to receive the estimated $5 million annual income stream generated by her share of the trust, effectively giving her “dad” control over that money—civil judgment (if any) be damned.

Meanwhile, in Southern California, a darts player with a pointed aversion to having the middle initial left out of his name scored a legal bull’s-eye against the organization that he felt didn’t try hard enough to get it right.

Dino Zaffina—make that Dino M. Zaffina—repeatedly made such a fuss about his middle initial being left off of posted tournament results that board members of the Southern California Darts Association decided in 2010 to refund his membership fee and oust him from the group.

Zaffina of Huntington Beach noticed that the group’s incorporated status had lapsed. He bought the rights to the name in January 2011, making himself president and CEO.

In September, Zaffina targeted dozens of darts players and Los Angeles-area bars that regularly host darts matches, suing them for “trade libel” and “unlawful business practices” because they were operating under the auspices of the SCDA, which he now legally controls.

When the group discussed reorganizing under another name, Zaffina quickly bought that domain name, as well as others similar to it.

So, what’s the message here? That the law can be co-opted to suit the needs and desires of people with agendas? Well, maybe. But the real takeaway might be that legal action doesn’t necessarily have to pass the smell test to pass muster.